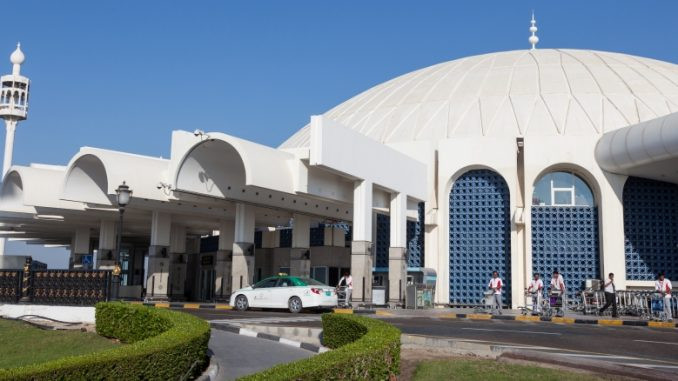 Sharjah International Airport (SHJ) is a progressive international airport in the United Arab Emirates and has been in operation since 1977, but its history dates back to 1932 as a major stopover for British Airways.

The third-largest airport in the United Arab Emirates impresses not only with its breathtaking architecture but also with an appealing landscape design. Located approximately 25 kilometers west of Dubai Airport, it is an ideal alternative to flying to Dubai and connects the emirate to over 280-holiday destinations worldwide.

In addition to passenger flights with over 10 million a year, Sharjah International Airport is also known as an important cargo airport. 5 terminals alone are reserved for luggage. A free app can be downloaded from the App Store and the Android Market. Everything is available, starting with real-time flight information, an overview of all shops, banks, restaurants, and other facilities, right through to a 3D map of the airport area.

The Sharjah Airport Authority (SAA) recently inaugurated the Dh40 million, project which “is a qualitative addition to the airport, contributing to enhancing its regional and global competitiveness. It will enhance the airport’s capacity to reach 20 million passengers by 2025.

This app offers quick answers to almost all questions and thus guarantees a relaxed stopover or stay at the airport. A small drawback is that it is only available in English or Arabic. An important tip for travelers who smoke: Since smoking is banned throughout the airport grounds, there are special smoking rooms – anyone who does not comply with the ban must expect penalties.

The airport is well connected to the public transport network, in addition to buses and taxis, cars can also be rented for quick and uncomplicated arrival and departure. Sharjah International Airport is the airport of the Emirate of Sharjah.

Today it is an important hub for cargo planes from all over the world, such as Lufthansa Cargo.

The low-cost airline Air Arabia, which offers very cheap flights in the Middle East, was also established in Sharjah. Tourists who still want to vacation in Oman can fly cheaply from Sharjah to Muscat. Several million passengers are handled at Sharjah International Airport every year.

The airport is west of Sharjah and has one runway. The airport code is SHJ. As a rule, tourists who are on holiday in Sharjah land at Dubai International Airport, and then they are taken to the booked hotel in Sharjah by shuttle bus. The transfer time is approximately one hour.

The design of Sharjah International Airport is beautifully done with its white domes. Even if you don’t fly away from Sharjah, it’s worth checking out the building. Here you can see immediately that you are in an Arabic country. Most of the new airports, for example, Dubai International Airport, have a very modern design and are not reminiscent of the Arab world.

After Dubai and Abu Dhabi, Sharjah is the best known of the seven emirates and has become a very popular holiday destination for tourists from all over the world. There are many cultural sights to discover here. Around 900,000 people currently live in Sharjah. The city is also very modern and there is a lot of construction going on. Especially the beaches in Sharjah are beautiful and there you can relax very well.

Post Views: 123
Related posts:
If you have found a spelling error, please, notify us by selecting that text and pressing Ctrl+Enter.

The Architecture of Consumption: Shopping Centers as an Exhibition Object - 8.08.21
Оставьте комментарий Cancel reply
Latest Articles
21:38
9 Facts about Emirates Airlines: Here You Can See Some Facts about Emirates Airline
21:39
Rixo’s The Palm Dubai: A Beautiful Beach Hotel in Dubai is the Rixos The Palm Dubai
19:34
More About Transport: The Tram in Dubai
21:05
Dubai Water Bus: The Dubai Water Bus is a Great Way to Explore the Marina and the Dubai Creek
16:30
Which Airport in Dubai: Where You Can Land
19:54
How Does a Doctor Visit in Dubai: You Do Not Have To Be Afraid
22:58
Air Arabia: Airline from Sharjah
19:25
Where the Sands: 10 Good Reasons Why You Absolutely Have to Go to Dubai
21:57
Safety in Dubai: Dubai is Considered One of the Safest Countries in the World
09:28
Everything You Need to Know About the Forex Traders Summit 2023
MyDubai.Media » Articles » Sharjah International Airport: Home Airport of Air Arabia