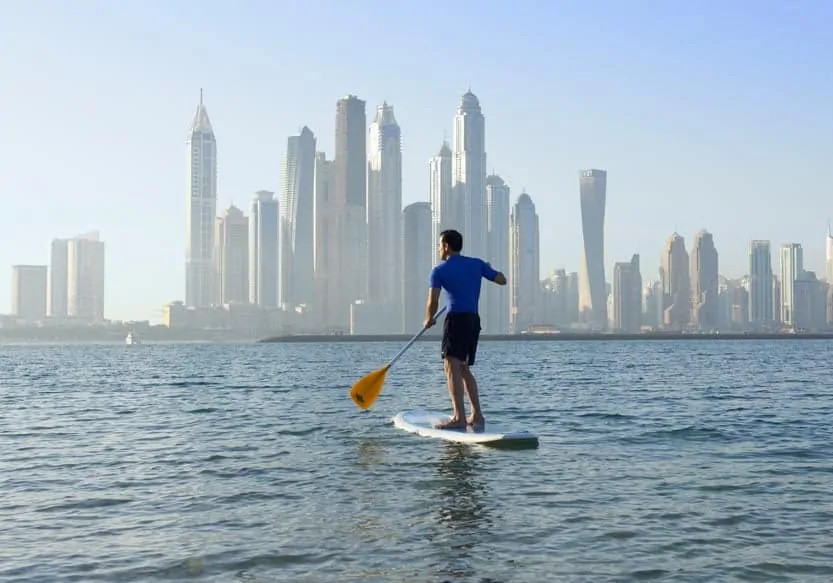 The island “The Palm Jumeirah” has developed into an independent, trendy luxury destination within the Emirate of Dubai in recent years. Despite the already large range of top hotels, exquisite restaurants, hip bars, and hip clubs, the potential is far from exhausted: The palm tree is growing and thriving!

In 2001, work began in Dubai on a mammoth project that many considered impossible: Dubai’s Prime Minister Sheikh Mohammed bin Rashid al-Maktoum wanted more coastline! So a new island was to be built that extends far into the sea and, viewed from the air, shows the shape of a date palm. Most of the work was finished in 2008 and the largest man-made island and engineering feat have since been a dream come true off the coast of the United Arab Emirates – so gigantic that it can even be seen from space.

The buildings sprout from the ground in all places: On the 17 palm fronds (“The Fronds”) are exclusive villas and the trunk is mostly flanked by high-rise apartment buildings. A monorail connects the driveway with the end of the trunk five kilometers away. The outer ring, which protects the palm like a crescent-shaped sickle, serves as a breakwater and is reserved for luxurious resorts.

As the first hotel on the island, right at the apex of the palm, the Atlantis, The Palm, opened in 2008 with a gigantic fireworks display. Visible from afar due to its opulent size, oriental architecture, and wide archway, it is still the most striking building of the Palm Jumeirah today. Since then, new luxury hostels have opened almost every year, making the island an independent destination within the Emirate of Dubai.

The hotels attract travelers because of their unique location and variety of options. But also because of the relaxed tranquility: Here you can withdraw from the hustle and bustle of the metropolis and look comfortably at the impressive skyline. But there is also plenty of action: guests from many countries as well as the residents of the Palm Jumeirah are enthusiastic about the unique leisure opportunities.

The island can be explored in a particularly relaxed manner by boat. Most hotels offer kayaks in the water sports center. Another alternative is stand-up paddling. With the new water sports trend, athletes stand on a surfboard and move forward with a paddle. If you want to go faster: One-hour boat tours are possible from the trunk of the palm tree.

There is also plenty of action and fun in the Aquaventure water park, which belongs to the Hotel Atlantis but is also open to day visitors. The park was recently expanded to 42 hectares. Typical for Dubai: Visitors get the ultimate adrenaline rush on the record-breaking slide with up to 60 kilometers per hour on “Poseidon’s Revenge”.

Things are more contemplative in the “Lost Chambers” aquarium world, where the legend of Atlantis was brought to life.

Aquaventure monorail and water park at Hotel Atlantis, The Palm

Aquarium world “Lost Chambers” in the Hotel Atlantis, The Palm

Stand-up paddling in front of the Marina skyline

Shopping in Dubai is not just about the big malls. The “Plato’s Walk” and “The Avenues” at the Hotel Atlantis, The Palm are also more relaxed. In addition to jewelry and accessories, there are fine boutiques with fashion from Armani to Zegna. In the Hotel Jumeirah Zabeel Saray, you can also stroll comfortably through the “Avenue of Indulgence” with its high ceilings, Arabic arches, and magnificent chandeliers.

With the two projects currently under construction, “The Pointe” and “Nakheel Mall”, new shopping opportunities are being created for hotel guests and residents at the top of the trunk. Above all, “The Pointe” is supposed to bring glamorous flair to the palm tree – with a marina, promenades, water fountains, and exclusive boutiques.

Whether star cuisine in first-class restaurants, sunny hours in the hip pool bars, or a hot party night in one of the nightclubs: the selection is huge! Gourmets and connoisseurs benefit from an immense culinary variety with specialties from almost all countries worldwide.

Especially in the Hotel Atlantis, The Palm there is the cuisine of the extra class because the international star chefs Nobu Matsuhisa and Giorgio Locatelli have established exquisite branches there. A creative Japanese-South American mix awaits visitors at Nobu. The Ronda Locatelli is charming and rustic, like in a Tuscan country house, where the Italian dishes are precisely prepared with fresh ingredients and modern ideas.

The high-end Chinese yuan is particularly impressive. Here there are contemporary interpretations of classic Cantonese cuisine in a spectacular, futuristic ambiance – just like in a film. A Mediterranean marina feeling emerges in the 101 dinings and lounge bar in One & Only The Palm, headed by Michelin star chef Yannik Alléno. It is located on the western tip of the outer ring and allows a clear view of the skyline.

But it tastes good even without a star: The new gastronomic highlight on the palm is the Supperclub in the Hotel Jumeirah Zabeel Saray. The new location combines art, music, and fine cuisine into a very special experience full of surprising moments – a real feast for the senses! Under the motto “expect the unexpected”, there has also been an offshoot in Dubai since 2013 with the proven concept of the Amsterdam lounge bar. Artistic performances create an extravagant atmosphere and take guests back to the time of the secret supper clubs. In the neighboring Music Hall, there is also a colorful show program with stand-up comedy, live music, dance performances, and up to ten acts per evening.

The locals believe that life in Dubai only really comes to life after sunset. Many visitors come to the Palm Jumeirah from the mainland to explore the glamorous nightlife there. A hot tip for this is the Nasimi Beach Club on Atlantis, The Palm. World-famous disc jockeys are often in the open air behind the turntables and the Sundance Festival regularly takes place with top international acts such as Emeli Sandé, Jamiroquai, or Morcheeba. With the Palm Jebel Ali, the Palm Jumeirah has even had a sister. Both islands should continue to grow in the coming years and establish themselves more and more as destinations for luxury and lifestyle.

Post Views: 160
Related posts:
If you have found a spelling error, please, notify us by selecting that text and pressing Ctrl+Enter.

The Architecture of Consumption: Shopping Centers as an Exhibition Object - 8.08.21
Оставьте комментарий Cancel reply
Latest Articles
09:28
Everything You Need to Know About the Forex Traders Summit 2023
16:42
Abu Dhabi Mall: The Mall in the Center of Abu Dhabi
21:58
Is a Credit Card Required in Dubai: In Any Case, You Need a Credit Card On Your Dubai Vacation
20:49
You Have to Tip in Dubai: With a Few Dirham You Can Reach a Lot
21:25
Atlantis The Palm Dubai Lobby: The Atlantis The Palm Dubai Lobby is Very Impressive for Visitors
16:21
JA Oasis Beach Tower: You Have a Great View from the JA Oasis Beach Tower in Dubai
19:47
Aura Sky Pool: The Highest 360-Degree Infinity Pool in the World is Only in Dubai
19:54
10 Highest Hotels in Dubai: In the Emirate of Dubai There are Many Tall Hotels with Great Views
20:27
Sharjah International Airport: Home Airport of Air Arabia
17:36
The Biggest Myths About Dubai: Is It True
MyDubai.Media » Lifehack » Interesting Facts about Palm Jumeirah Dubai