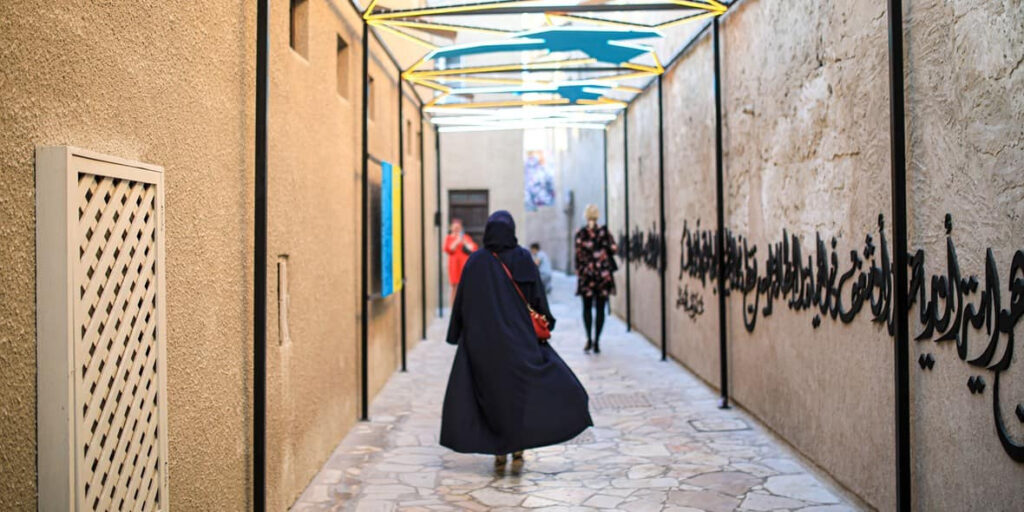 Young. Modern. Fancy. Hardly any other city has transformed so rapidly into a diverse and exciting metropolis of millions as Dubai. Even if the rich tradition and history of the emirate are emphasized again and again, the cityscape of Dubai is predominantly shaped by the achievements of the last 20 years.

Glass super skyscrapers, artificial islands, or completely new urban districts with canals and harbors reflect the modernist approach of the Arab metropolis. It’s not just architecture and infrastructure that keeps pace with the times, the contemporary art and culture scene is also bringing new momentum to public life in Dubai. The megacity has now become the most popular contact point for artists from all over the Middle East. Why? Because Dubai inspires with its hip and exciting lifestyle and cultural institutions. Reason for us to take a closer look at the hotspots of the young cultural scene.

Alserkal Avenue: The center of the Young Cultural Scene

The center of Dubai’s modern art scene is inconspicuous and unspectacular in the industrial district of Al Quoz. It all began in 2007 when the Emirati businessman Abdelmonem Bin Eisa Alserkal decided to gradually rent out 39 warehouses on a street block to artists and creative people. A year later, the Ayyam Gallery, the first art gallery, moved into the industrial complex.

This is how Alserkal Avenue was created, a complete street in which contemporary art galleries, non-profit organizations, foundations, private collections, community projects, and catering establishments are gathered on over 46,000 square meters.

There are now 60 cultural institutions on the site and with 25 art galleries on site, Alserkal Avenue sets the record for the highest density of art galleries in the region.

There is so much to see on a tour of the “avenue”. Modern installations in Carbon12, bizarre sculptures in the Custot Gallery Dubai, design and light objects in the Svenm, or the performance and dance theater The Junction are just a few examples of how diverse and creative life is in the art district. A number of culinary concepts can also be found in the “art block”, such as the Mirzam Chocolate Makers chocolate factory, the organic restaurant Appetite, or the Project Chaiwala, which is dedicated to Indian tea art and offers delicious street food.

In 2017 Alserkal Avenue got an extraordinary “main building”.

A multifunctional exhibition hall with movable walls, double ceiling heights, and a translucent facade was created under the name Concrete. On a tour of Alserkal Avenue, you will encounter a wide variety of concepts and creative artists who make a visit inspiring, tasty and entertaining.

The cinema landscape in Dubai is huge. From huge multiplex halls to luxury versions with business class leather seats to dine-in concepts, film fans get their money’s worth. However, there is no other cinema that is as romantic, personable, and unique as Cinema Akil. As part of Alserkal Avenue, it is the first art-house cinema in Dubai to show international art-house films. The cinema only consists of one hall with around 130 seats, but this offers a somewhat different film experience.

In the converted warehouse, visitors take their places on plush sofas and discarded benches in Dubai’s oldest cinema.

Red and gold wallpapers and heavy velvet curtains hang on the wall and the aforementioned Project Chaiwala provides the cinema buffs with tea and snacks. In addition to current productions from all over the world, the movie theater repeatedly shows classics from film history, and discussions with directors, actors, film scholars, and fans take place.

Dubai Opera: The Opera House with a Difference

Concerts, theater, dance, comedy, and much more: The Dubai Opera is not an opera house in the classical sense, but rather a venue for cultural events of all kinds Space for 2,000 guests as a versatile all-rounder. Because: The design of the house is so flexible that it offers the right ambiance for three different types of events. It can transform itself from a concert hall into a theater hall and into a banquet hall for meetings or conferences. Architecturally, the building is modeled on an Arab dhow.

Not only the interior but also the foyer impresses with its optics and acoustics.

Even if there are no events, interested parties can take a look around the opera during the day or book a guided tour of the backstage area. If you take the escalator all the way to the top, you have a great view of the Burj Khalifa and the Dubai Fountains, and guests can also look directly at the five-meter-long chandelier called “Symphony” with its 30,000 glass beads.

The Dubai Creek is closely linked to the history of the city. The historic districts of Bur Dubai and Deira in particular bear witness to the city’s traditions.

There are several museums here that trace the history and culture of Dubai. Another museum has recently opened directly on the inlet, but further south on the artificially created island of the Jaddaf Waterfront. The Jameel Arts Center is a refreshing new exhibition space in which modern and contemporary art is presented in an exciting way.

The Architecture of Consumption: Shopping Centers as an Exhibition Object - 8.08.21
Оставьте комментарий Cancel reply
Latest Articles
21:58
Is a Credit Card Required in Dubai: In Any Case, You Need a Credit Card On Your Dubai Vacation
20:49
You Have to Tip in Dubai: With a Few Dirham You Can Reach a Lot
21:25
Atlantis The Palm Dubai Lobby: The Atlantis The Palm Dubai Lobby is Very Impressive for Visitors
16:21
JA Oasis Beach Tower: You Have a Great View from the JA Oasis Beach Tower in Dubai
19:47
Aura Sky Pool: The Highest 360-Degree Infinity Pool in the World is Only in Dubai
19:54
10 Highest Hotels in Dubai: In the Emirate of Dubai There are Many Tall Hotels with Great Views
20:27
Sharjah International Airport: Home Airport of Air Arabia
17:36
The Biggest Myths About Dubai: Is It True
14:52
The Ukrainian Charitable organization appeals to the world community to help Ukrainians affected by the war in Ukraine
18:19
Yas Island Rotana: Yas Island in Abu Dhabi
MyDubai.Media » Articles » Dubai’s Modern Art Scene: The Best Hotspots