Things to Do in Dubai: 50 Incredible Opportunities 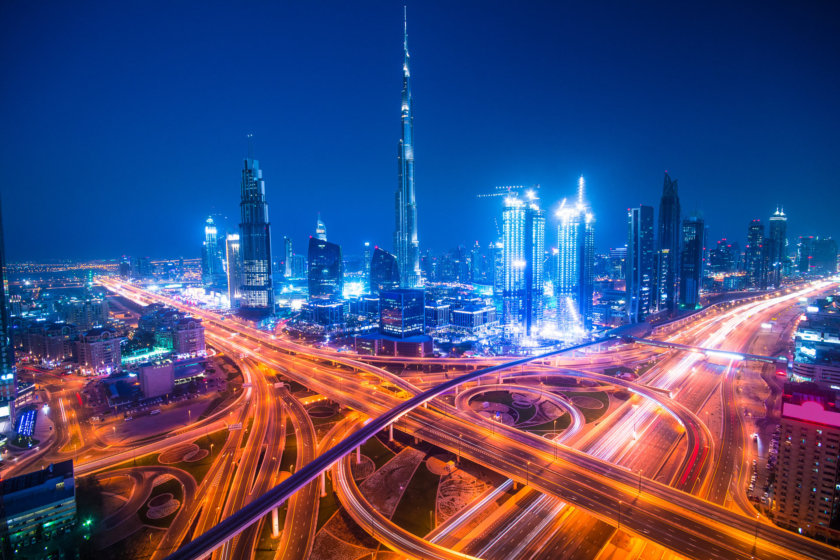 Burj Khalifa: the tallest tower in the world is in Dubai

Dubai is the largest city in the United Arab Emirates (UAE). More than 2 million people live here, and representatives of more than 90 different peoples meet here.

Burj Khalifa is the Highest Building in the World

Burj Khalifa is currently the tallest building in the world (828 m) and one of the most popular landmarks in Dubai. You will love and hate the building.

At the foot of a huge skyscraper is the artificial Burj Dubai Lake with the famous fountain, also known as the Dubai Fountain. It is the main attraction in the city center. How could it be otherwise, this is of course the largest fountain in the world. With a length of 275 m, up to 100,000 liters of water rises to a height of 1 to 150 m. Very impressive.

Since we know the people in Dubai, we go on a desert safari every time. And to be honest: it’s just Oberhammer! Here you can find a detailed article about our desert safari that we will never forget. Traveling across the sand dunes in your own jeep is something very special.

Burj Al Arab, also called Al Arab, is one of the top attractions in Dubai. Burj Al Arab, along with the Burj Khalifa, is one of the most famous buildings in the world and a very popular landmark in Dubai. Its height is 321 meters and it is shaped like a sail. Officially, the hotel has “only” five stars, but the media often add two more stars due to the luxurious setting. Only the Emirates Palace in Abu Dhabi is considered more luxurious.

One of the most unusual places in Dubai is the World Island, also called the Lebanon Island. The World Island is the only completed and publicly available World Island project. Later “Mir” will consist of 300 islands and is currently under development.

The Palm is probably the most famous project we know from Dubai. From the plane, you can see the artificially raised island. Currently, work is underway on two more “Palm Islands”: “Palm Jebel Ali” and “Palm Deira”.

Flying a helicopter is one of my personal accomplishments and I recommend everyone to take this tour. During your sightseeing flight, you will see beautiful sights. From the air, you simply have the best view of the Palm or the World. My sightseeing helicopter flight took a total of 12 minutes and started at the Atlantis Hotel.

There’s always something going on at Dubai Marina and Jumeirah Beach Residence (abbreviated as JBR). JBR Beach is one of the most popular beaches in Dubai with a huge promenade. Here’s everything you can imagine.

Many will not believe me, but Dubai has amazing beaches! And they are almost all different. You can either lie on the beach to unwind or do one of the countless activities. From water skiing to kitesurfing, flyboarding, fitness, ice skating, or volleyball, the beaches really have a lot to offer. You can even run a marathon on all the beaches as there is a well-developed running route along the coast.

Emirates has great food. In the meantime, finding a real Arabic restaurant in Dubai is no longer so easy. There are many western restaurant chains that you know from everywhere.

The Dubai Mall is located right on top of the Burj Khalifa and with more than 1,200 shops, it is currently the largest shopping center in the world and one of the most popular shopping malls. You always have to speak now, because you never know what will happen next year.

The Old Souk in Bur Dubai

Mall OF Emirates – Ski Dubai: A Different Kind of Holiday

The Mall of the Emirates is similar to the Dubai Mall but slightly smaller in size. It offers “only” 600 stores. It is best known for its ‘Ski Dubai’ which means you can ski at the mall.

It’s not just the Burj Khalifa or the Dubai Mall worth visiting. Just walk along Burj Dubai Lake and Sheikh Mohammed bin Rashid Boulevard. This is the promenade that stretches around the Burj Khalifa. You will definitely find some beautiful corners.

On the south bank of Dubai Creek lies Dubai’s restored old city: Bur Dubai. The sights of the old city stretch along Dubai Creek. It is believed to be one of the oldest districts in the city. There are several historical sites and museums worth visiting. It is worth taking a dhow ride on Dubai Creek.

“The Frame” is a popular sight (since the beginning of 2018) and it is again a building that is very difficult to get completely on the lens. But the building is really cool and well worth a visit.

You will only see the palace of Sheikh Muhammad bin Raschid Al Maktum from the outside.

In contrast to the Sheikh Zayed Grand Mosque in Abu Dhabi, the Jumeirah Mosque is rather modest. But still no less impressive. Non-Muslims are also allowed in the mosque 6 days a week.

The Arab market, Souk Madinat, is near the Burj Al Arab. It is also called the “City of Merchants”. The typical Arabic flair of a bazaar awaits you in the souk. You will find fashion, jewelry, art, antiques, oils, spices, and many restaurants and bars. It is a kind of lagoon city in the style of Arab palaces.

The Arab markets, also known as the souk, invite you to stroll. If you’ve been to Bur Dubai before, take a water taxi (1 Dirham) and drive over Dubai Creek to Deira.

A sea of ​​over 50 million flowers blooming in the most beautiful colors in the middle of the desert sounds just as incredible as skiing and ice skating at a daytime temperature of 25 to 45 ° C?

From one dizzying Dubai attraction to the next: the world’s largest Ferris wheel is expected to open on the popular promenade, The Walk, by the end of 2020.

Al Fahidi Fort, built mainly from clay and coral in the 18th century, was used to defend Dubai from attackers.

On the other side of Dubai Creek, directly across from the Dubai Gold Souk, is the Al Fahidi district. The district, which is also called al Bastakiyya, is one of the more traditional Dubai attractions, just like the souks.

The Dubai Creek, the arm of the sea that runs through the city and divides it into two parts – the new and the old Dubai – is much more than a river.

Few of them expect a ski hall when talking about the top Dubai attractions.

Shopping is simply one of the most popular activities in Dubai. In addition to the Dubai Mall, world-famous thanks to the Burj Khalifa, there are other malls and shopping centers in the luxurious emirate that make the heart of every fashion victim beat faster.

The next Dubai attraction is just outside the center. The Dubai Parks and Resorts is a theme park complex that is actually the largest in the Middle East.

Since Dubai is located on the Persian Gulf, you can also go there for swimming. The emirate also offers Jumeirah Beach, which is divided into several sections. It stretches for several kilometers along the coast. There are always private beach sections in between. The two beach areas that are best suited for you as a vacationer are called Jumeirah Public Beach (La Mer) and Umm Suqeim Beach.

Aquarium and underwater zoo in Dubai

A trip that is great fun even during the hot summer is a visit to the Aquaventure water park. This large water park belongs to the Atlantis Hotel and is located on Palm Island. Numerous slides await you here, some of which are very unusual.

If you miss the green plants during your trip, a trip to the indoor rainforest “The Green Planet” is the right thing for you. The rainforest was created in a so-called bio-dome, which is also worth seeing from the outside. Because the building itself is an eye-catcher.

It’s so nice to feel like a star in a posh city. See legendary Burj Al Arab and Atlantis hotels.

This destination should not be missing from a list of the best Dubai activities. On this excursion, you will not only visit the aquarium itself but also get a glimpse behind the scenes and watch marine researchers and zookeepers at work. The aquarium is rich in species of fish, from jellyfish to sharks to stingrays.

On this 90-minute tour, you’ll be whisked through Dubai Marina on a modern glass-enclosed boat as the sunsets.

The Walk on The Beach / JBR

Have you always wanted to dive? This tour on Jumeirah Beach is great for beginners.

When it comes to Dubai excursions, the desert is of course the ultimate destination. If you want to experience the desert up close and full of action, then we recommend a sand buggy tour.

The quad tour described above is also available with a barbecue afterward. The quad ride also includes stops for photos followed by a barbecue on a traditional Bedouin farm, a camel ride, and sandboarding.

Attention nature lovers! In this imposing fjord, which can only be reached by water and is located on the Musandam peninsula, you can see the beauty of the rugged landscape between the United Arab Emirates and Oman.

Another very well equipped and really nice place for a stroll in Dubai is La Mer.

Post Views: 154
Related posts:
If you have found a spelling error, please, notify us by selecting that text and pressing Ctrl+Enter.

The Architecture of Consumption: Shopping Centers as an Exhibition Object - 8.08.21
Оставьте комментарий Cancel reply
Latest Articles
21:38
9 Facts about Emirates Airlines: Here You Can See Some Facts about Emirates Airline
21:39
Rixo’s The Palm Dubai: A Beautiful Beach Hotel in Dubai is the Rixos The Palm Dubai
19:34
More About Transport: The Tram in Dubai
21:05
Dubai Water Bus: The Dubai Water Bus is a Great Way to Explore the Marina and the Dubai Creek
16:30
Which Airport in Dubai: Where You Can Land
19:54
How Does a Doctor Visit in Dubai: You Do Not Have To Be Afraid
22:58
Air Arabia: Airline from Sharjah
19:25
Where the Sands: 10 Good Reasons Why You Absolutely Have to Go to Dubai
21:57
Safety in Dubai: Dubai is Considered One of the Safest Countries in the World
09:28
Everything You Need to Know About the Forex Traders Summit 2023
MyDubai.Media » Articles » Things to Do in Dubai: 50 Incredible Opportunities