Most Expensive Real Estate in Dubai: Stunning Deals and Some Predictions 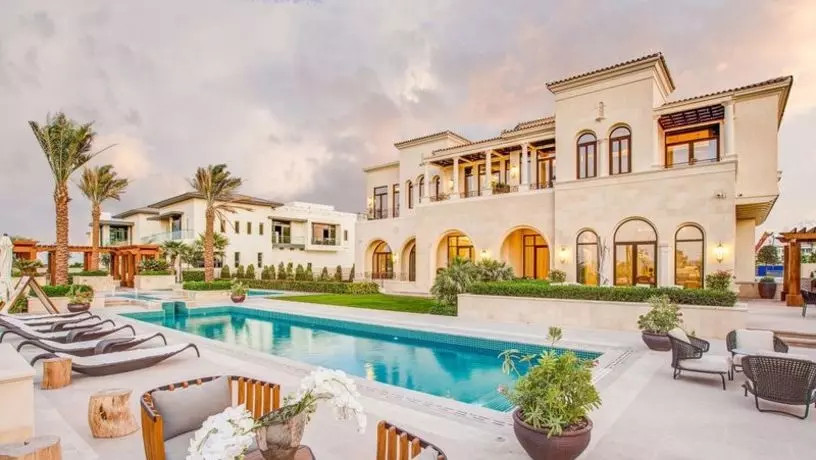 Dubai is not short of superlatives. Now the metropolis is getting a new highlight: US real estate tycoon Donald Trump is building two gigantic hotel towers on an artificial island off the coast. The project beats all records.

The real estate market in Dubai, panting from peak to peak, has a superlative richer. On the Palm Jumeirah, an artificially created palm-shaped archipelago in the Persian Gulf equipped with luxury villas, the American real estate tycoon Donald Trump is building a 62-story double skyscraper with a hotel and residential tower. It should be completed in three years.

But the $ 700 million projects made of glass and steel is already breaking all records: According to the state development company Nakheel in Dubai, the most expensive of the 399 apartments, a light-flooded penthouse with an unobstructed view of the sea, will be sold for more than 30 million dollars. The price is twice that of the most expensive apartment to date. The Trump International Hotel & Tower, a joint venture with Nakheel, is the US magnate’s first project in the Middle East.

Palm Jumeirah is currently the Mecca for international real estate investors. Villas change hands quickly for tens of millions of dollars. Margins have quintupled in the past few months. In order to bring their exclusive properties to customers, development companies in Dubai advertise with international stars. ACI Real Estate hired Formula 1 legends Michael Schumacher and Niki Lauda as well as tennis icon Boris Becker as the namesake for three properties. Total cost: around $ 600 million.

Golf superstar Tiger Woods is designing a sports complex for Tatweer in a posh neighborhood with country houses starting at $ 15 million. Fashion guru Giorgio Armani has his own hotel with 175 rooms in Burj Dubai, which will soon be the tallest tower in the world at more than 800 meters.

But land prices are also exploding below the luxury plus category. According to real estate consultant Colliers International, home buyers in Dubai turned over almost 80 percent more in the first quarter of 2008 than in the same period of the previous year. The price jump between the last two quarters was 42 percent. The square meter now costs an average of $ 4,670.

The expensive deal for the last years in Dubai is the AED 60 million apartments at Bulgari Resorts Dubai, located on the artificial seahorse-shaped island of Jumeirah Bay Island in Dubai.

Two other properties on the same island were not much cheaper for buyers – these are villas worth 41.1 million and 36 million UAE dirhams.

Meanwhile, another artificial island, Palm Jumeirah, also continues to attract wealthy buyers of luxury real estate in Dubai. In the Royal Atlantis Residences under construction here, according to Luxhabitat, two more super-expensive transactions were recorded worth 25 million and 21.3 million dirhams.

And at Alef Residences (also on Palm Jumeirah), 642 square meters of luxury apartments were sold for a record AED 14.2 million.

Thus, the activity of buyers in the real estate market of the premium segment in Dubai in the first quarter of the year cannot be called reduced.

It is interesting that sales of finished and under construction real estate from developers in this market segment have recently begun to actively compete with sales of secondary real estate from investors who have begun to display their offers more actively.

However, “the demand for high-quality residential projects directly from developers continues to grow,” said Brigitte Tenbergen, deputy director of Luxhabitat.

Unlike last year, when the luxury home sales market was dominated by villas in the Emirates Hills, this year only one villa in the area has been sold so far – a huge 1,154 sq. meters for 25.9 million dirhams.

Most Expensive Villa Sold in Dubai

Recently, the Dubai Hills area has become a favorite destination for high-profile homebuyers and upper-middle-income buyers.

In the third quarter, super-premium purchasing activity showed clear growth, with wealthy investors giving a clear advantage to locations such as Palm Jumeirah, District 1, and Downtown.

After isolation, Dubai property owners want to get closer to nature. And the most expensive home in Dubai Hills does offer quite a few scenic touches with this parameter in mind.

At Dubai’s most expensive home, there is no need to purchase a shared gym membership. The house provides ample space for all kinds of sports. An area of ​​4,000 square meters allows you to create here not only your own full-fledged gym with a swimming pool but also a private cinema and much more.

The classic ambiance is ideal for cozy family dinners, formal receptions, or a party with friends. The entrance group of the mansion is quite consistent with its value.

Are investors ready to return to the Dubai property market? The numbers for the third quarter show a sharp, albeit limited, jump in luxury real estate deals, especially those on or near completion.

Many projects in MBR City, including Dubai Hills, have the advantage of having more ready-made luxury properties to choose from. And so far, the prices for these super-premium houses do not show sharp fluctuations in either direction.

The Architecture of Consumption: Shopping Centers as an Exhibition Object - 8.08.21
Оставьте комментарий Cancel reply
Latest Articles
21:58
Is a Credit Card Required in Dubai: In Any Case, You Need a Credit Card On Your Dubai Vacation
20:49
You Have to Tip in Dubai: With a Few Dirham You Can Reach a Lot
21:25
Atlantis The Palm Dubai Lobby: The Atlantis The Palm Dubai Lobby is Very Impressive for Visitors
16:21
JA Oasis Beach Tower: You Have a Great View from the JA Oasis Beach Tower in Dubai
19:47
Aura Sky Pool: The Highest 360-Degree Infinity Pool in the World is Only in Dubai
19:54
10 Highest Hotels in Dubai: In the Emirate of Dubai There are Many Tall Hotels with Great Views
20:27
Sharjah International Airport: Home Airport of Air Arabia
17:36
The Biggest Myths About Dubai: Is It True
14:52
The Ukrainian Charitable organization appeals to the world community to help Ukrainians affected by the war in Ukraine
18:19
Yas Island Rotana: Yas Island in Abu Dhabi
MyDubai.Media » Real Estate » Most Expensive Real Estate in Dubai: Stunning Deals and Some Predictions