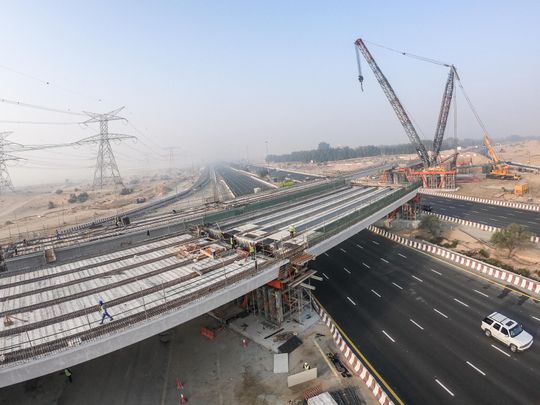 Dubai: Mattar Mohammed Al Tayer, Director-General, Chairman of the Board of Executive Directors of the Roads and Transport Authority (RTA), announced that the completion rate in Al Khawaneej Road Improvement Project had reached 60 per cent. The project works include the construction of three intersections and service roads extending to 23km along Al Khawaneej and Al Amardi Roads.

“The completion rate reached 82 per cent at the underpass intersection of Al Khawaneej Road and Sheikh Zayed bin Hamdan Al Nahyan Road. The contractor completed the construction works at the closed section of the tunnel and is currently working on the supporting walls of the open section of the tunnel. Works are expected to be completed and the tunnel to be opened for traffic this March,” said Al Tayer.

“Work progress rate also reached 60 per cent on the bridge leading to Al Awir, following the installation of precast bridge parts across Emirates Road in Abu Dhabi-Sharjah direction. Work is currently underway for the installation of other parts at Al Amardi, which are expected to be completed by the end of this month. Then the contractor will undertake the remaining construction works, such the bridge, which will be ready for opening by the end of March this year,” Al Tayer added.

“The Al Khawaneej Roads Project is one of the key strategic projects for improving the links between Dubai and Sharjah through the improvement of vertical roads linking Emirates Road and Sheikh Mohammed bin Zayed Road, up to Airport Street. The project will also accommodate the current and projected growth of traffic. Upon completion, it will slash the travel time between Emirates Road and Sheikh Mohammed bin Zayed Road from 25 minutes to nine minutes, and the waiting time at the junction of Al Khawaneej-Sheikh Zayed bin Hamdan Al Nahyan Roads (Al Khawaneej Roundabout) from 330 seconds to 45 seconds. It will double up the capacity of the junction from 8,000 to 16,000 vehicles per hour. Replacing the roundabout at the intersection of Al Khawaneej-Al Amardi Roads by a surface junction will halve the waiting time from 120 seconds to 60 seconds,” explained Al Tayer.

“The project includes the construction of a tunnel of three lanes in each direction, extending 680 metres at the intersection of Al Khawaneej Road with Sheikh Zayed bin Hamdan Al Nahyan Road. Work also includes construction of a surface signalised junction to ensure free and safe traffic flow on Al Khawaneej Road, and upgrading the existing roundabout at the intersection with Al Amardi Road by a signalised junction. The intersection of Al Amardi-Emirates Roads will be upgraded to a flyover of two lanes in each direction extending 201 metres above the Emirates Road in the direction of Al Awir.

The construction of Al Khawaneej Road Improvement Project follows the completion and opening of all phases of improvements of the Airport Street Project involving upgrading four intersections: Al Rashidiya, Nadd Al Hamar, Marrakech, and Casablanca. The project had immensely improved the traffic flow, reduced the waiting time and sorted out congestions caused by overlapping traffic.

Benefits from the project:

Improve the link with Airport Street as well as Al Awir and Al Khawaneej.

Double up the capacity of Al Khawaneej intersection from 8,000 to 16,000 vehicles per hour.

Reduce the waiting time at the intersection of Al Khawaneej-Sheikh Zayed bin Hamdan Roads from 330 seconds to only 45 seconds.

Cut the waiting time at Al Khawaneej-Al Amardi junction from 120 seconds to 60 seconds.

Post Views: 79
Related posts:
If you have found a spelling error, please, notify us by selecting that text and pressing Ctrl+Enter.

The Architecture of Consumption: Shopping Centers as an Exhibition Object - 8.08.21
Оставьте комментарий Cancel reply
Latest Articles
21:38
9 Facts about Emirates Airlines: Here You Can See Some Facts about Emirates Airline
21:39
Rixo’s The Palm Dubai: A Beautiful Beach Hotel in Dubai is the Rixos The Palm Dubai
19:34
More About Transport: The Tram in Dubai
21:05
Dubai Water Bus: The Dubai Water Bus is a Great Way to Explore the Marina and the Dubai Creek
16:30
Which Airport in Dubai: Where You Can Land
19:54
How Does a Doctor Visit in Dubai: You Do Not Have To Be Afraid
22:58
Air Arabia: Airline from Sharjah
19:25
Where the Sands: 10 Good Reasons Why You Absolutely Have to Go to Dubai
21:57
Safety in Dubai: Dubai is Considered One of the Safest Countries in the World
09:28
Everything You Need to Know About the Forex Traders Summit 2023
MyDubai.Media » Real Estate » Dubai’s Al Khawaneej Road Improvement Project reaches 60% completion