Best New Year Show in Dubai: Experience a Spectacular Show at the Highest Building in the World 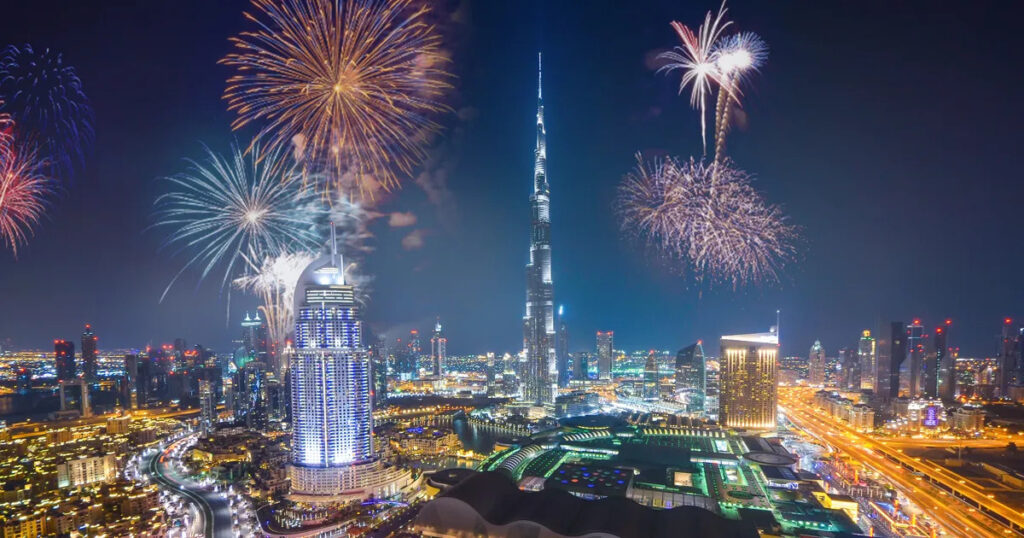 At the turn of the year, the city of superlatives sets its own standards. Bigger, more spectacular, more breathtaking – this is New Year’s Eve in Dubai! Read now what awaits you on December 31st in the magnificent desert city and where you will have the best view of the spectacular fireworks.

The largest city in the United Arab Emirates, Dubai, enchants and fascinates tourists from all over the world. Imposing buildings such as the Burj al Arab or the Burj Khalifa, which with its 828 meters breaks all records, luxury hotels, like from A Thousand and One Nights, and shopping malls where credit cards are made to glow – all this and much more is what makes the desert city an absolute tourist magnet. And that’s no different at the turn of the year either. But how is New Year’s Eve actually celebrated in Dubai? We’ll tell you one thing in advance: A superlative New Year’s Eve awaits you here!

READ: Why So Rich: Why the People of Dubai are So Rich

Have you ever wondered how to celebrate New Year’s Eve in Arab countries? According to our Gregorian calendar, the turn of the year is celebrated on December 31st of each year, but in Islamic countries, the Islamic lunar calendar is used, according to which the year is about eleven days shorter. Last year, for example, Muslims celebrated the turn of the year on August 20th, this year it falls on August 10th. Unlike ours, traditionally no fireworks are lit and sparkling wine is toasted. But Dubai wouldn’t be Dubai if the megacity hadn’t come up with something for the many immigrants and tourists from all over the world.

You can leave your thick winter jacket at home if you are planning a New Year’s Eve Dubai vacation. December is also wintertime in the United Arab Emirates, but this is even the main tourist season in the desert state, where the temperature in summer can be 40 degrees and more. December is the best time to travel to Dubai. You can look forward to more pleasant temperatures of up to 30 degrees and around eight hours of sunshine a day. Ideal beach weather!

READ: Shops of Dubai Mall: Here is an Overview of the Shops in the Dubai Mall

So if the bikini has landed in the suitcase instead of the moon boots, you should think about where you want to spend the turn of the year, because the places in the bars and restaurants with a view of the big fireworks are coveted and often almost unaffordable. In general, most restaurants offer special New Year’s Eve menus on New Year’s Eve, and you should definitely reserve a table in advance! For example, we can recommend the restaurants in the Dubai Mall, which should be on your sightseeing plan for Dubai anyway. In addition to over 1,000 shops of various brands, you will find restaurants and snack bars that cater to almost every taste. But here, too, it is better to reserve in advance and eat in the late afternoon, because it gets more and more crowded here towards evening and some areas are even cordoned off.

The Dubai Mall is located directly on the Burj Khalifa, which is not only the tallest building in the world but also where the most phenomenal New Year’s Eve fireworks that you have ever seen take place! Fireworks are not anchored in Muslim culture, but Dubai is by no means rubbish, investing several hundred thousand dollars to offer the celebrants a top-class spectacle and that in several places in the city.

The largest fireworks display takes place directly on, or rather on the Burj Khalifa. Pyrotechnics are installed on all floors of the mega-building, which is ignited in an ingenious choreography. A sea of ​​lights illuminates the city and is guaranteed to leave you amazed. At the turn of the year 2013/2014, this show, which was broadcast on television and via livestream, broke all records and has since been in the Guinness Book of Records as the biggest New Year’s Eve fireworks display of all time. In the years that followed, the fireworks were no less spectacular, so you can get ready for the New Year’s Eve fireworks of your life!

With a little luck, you will even find a hotel with a view of the Burj Khalifa so that you can enjoy the fireworks from your hotel room without the crowds. Many hotels also have a roof terrace, from which a magnificent view is guaranteed.

Otherwise, you can also look for a spot on the beach, because here you can even see the other fireworks that are set off on the island group The Palm Jumeirah, among others. However, you should definitely note that the streets and metros in Dubai will be very crowded on New Year’s Eve and you should get on the way in good time so that you can secure a good spot. You should also leave the bottle of sparkling wine in your hotel room because in Dubai it is forbidden to drink alcohol in public. If you go to a restaurant or bar and want to celebrate wet and happy, you should pay attention to whether alcohol is served in the bar. Don’t worry: There are enough bars and clubs in Dubai where you can party as usual after the fireworks.

See also  Atypical New York: Where Better Not Even Looking

The Best Views of the Fireworks in Dubai

Are you looking for a restaurant or a roof terrace in Dubai from which you have a great view of the New Year’s Eve fireworks? Then you should take a closer look at the following locations:

The Most Exclusive New Years Eve Party in Dubai

If you are into luxury and want to spend the turn of the year really glamorous at least once, Dubai is definitely the right place for it. A very special experience awaits you at Atlantis The Palm at the Atlantis Royal Gala. The perfect party location is being created right on the beach to welcome the New Year appropriately.

A 30-member band ensures good music and a relaxed atmosphere. Champagne, lobster, and caviar round off the luxury evening, but of course, the biggest highlight awaits you at midnight when you can marvel at the fireworks over the skyline of Dubai from the beach. Goosebumps guaranteed!

Post Views: 48
Related posts:
If you have found a spelling error, please, notify us by selecting that text and pressing Ctrl+Enter.

The Architecture of Consumption: Shopping Centers as an Exhibition Object - 8.08.21
Оставьте комментарий Cancel reply
Latest Articles
09:28
Everything You Need to Know About the Forex Traders Summit 2023
16:42
Abu Dhabi Mall: The Mall in the Center of Abu Dhabi
21:58
Is a Credit Card Required in Dubai: In Any Case, You Need a Credit Card On Your Dubai Vacation
20:49
You Have to Tip in Dubai: With a Few Dirham You Can Reach a Lot
21:25
Atlantis The Palm Dubai Lobby: The Atlantis The Palm Dubai Lobby is Very Impressive for Visitors
16:21
JA Oasis Beach Tower: You Have a Great View from the JA Oasis Beach Tower in Dubai
19:47
Aura Sky Pool: The Highest 360-Degree Infinity Pool in the World is Only in Dubai
19:54
10 Highest Hotels in Dubai: In the Emirate of Dubai There are Many Tall Hotels with Great Views
20:27
Sharjah International Airport: Home Airport of Air Arabia
17:36
The Biggest Myths About Dubai: Is It True
MyDubai.Media » Articles » Best New Year Show in Dubai: Experience a Spectacular Show at the Highest Building in the World