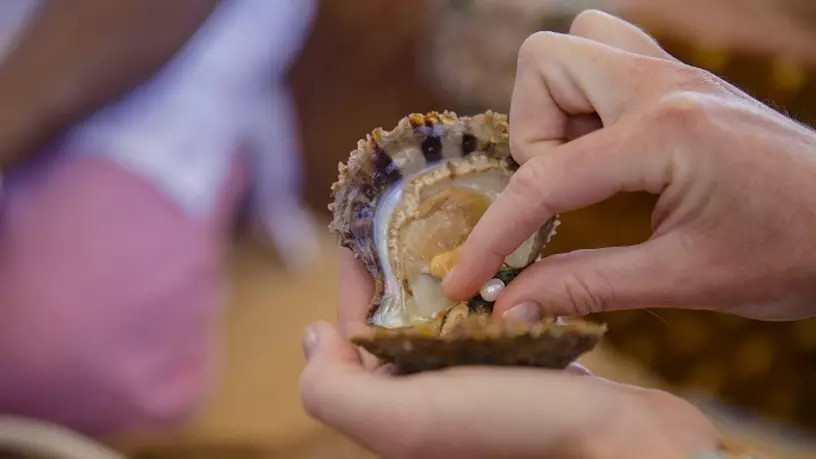 There are many myths and legends about the emergence of pearls. According to one of the Emirati legends, the pearl is the daughter of the rain (Bint Al Matar’), which fell into the sink and turned into a pearl. The second legend states that the pearl is the daughter of the moon (Bint Al Qamar), which has fallen into the sink through the moonbeam. Whether from rain or from the moon a pearl is born, it is the most fascinating and not requiring processing of the jewellery of nature from ancient years to the present day.

Pearl fishing was one of the main activities on which the economy of the United Arab Emirates was based prior to the discovery of oil. And modern Ras Al Khaimah was formerly known as the city of Julfar and the capital of pearls (this is confirmed in documents of European navigators dated 1654).

It was thanks to the fishing of pearls that Dubai became famous as the main «pearl coast». And the sale of pearls in the Donoft period brought 95% of the national budget revenues.

The pearl fishery was controlled by large traders who sponsored those who directly extracted the pearls from the bottom. The pearl diver, equipped with a knife, an oyster basket and a clip on his nose, was submerged in the waters of the Persian Gulf all day, collecting several pearls, floating up and sinking again. So many times. Of a hundred oysters, only one will have a pearl.

In the expedition, pearl divers were sent in the summer months. For four consecutive months, they ate nothing but fish and rice, smoked hookah in the evenings and sang songs. Professional divers were at risk of becoming a treat for predatory fish in the Persian Gulf, constant pressure swings and corrosive sea salt were detrimental to health, and lack of protection for eyes and ears led to deafness and blindness.

The diving age was short-lived, and the profession passed from generation to generation. «Golden Summer» was called the season when the diver returned with the prey, thanks to which a piece of land could be bought. In other years, the pearl-mining season may have even led the family to bankruptcy, as the boat seat had to be bought in advance.

In the Persian Gulf, «produces» pearls of various colors: white, pink-cream, green-gold, blue and grey. The fact is that the chemical composition of the water in the bay and its temperature create the ideal habitat for the pearls. That is why natural pearls from the region now account for more than 50% of the world market.

The subsequent global crisis (the Great Depression) and the invention of artificial pearl-growing technology (Mikimoto, Japan) led to a decline in interest in pearls and a decline in natural pearl production in the UAE. Even so, until the 1950s, pearl fishing remained the main financial support for UAE residents. In 2005, the first cultivated pearl was cultivated in the United Arab Emirates by RAK Pearls (Ras Al Khaimah) with the help of a Japanese company and the technology of a rising sun country. On the base of this farm there is now the first museum of pearls in the country with interesting exposition and enthusiastic guides open for tourist visits.

Fishing in the UAE

One of the most fascinating and traditional occupations in the UAE is fishing in the waters of the Persian Gulf and the Indian Ocean, which are rich in diverse fish.

Traditionally, fishing for the Emirates prior to the discovery of the oil fields was an integral part of life and a major source of food and income for the country. The consumption of fish and seafood per unit of population in the UAE is the highest in the Middle East.

Almost every emirate offers amateur fishing. The most popular fishing grounds in the UAE are Jabal Ali, Ras Al Khaimah and Fujairah. Fishing in the Arab Emirates requires a special permit, but this will not be a problem when renting a yacht or boat in special private marine clubs or hotel clubs. The best time for fishing in the Persian Gulf is from October to May. The number of people on the yacht can be between 6 and 18 depending on the size of the boat.

Bottom fishing in the UAE is probably the easiest and is suitable for both amateurs and professionals. Your yacht stops in the open sea, dropping anchor, and you catch fish off the board, enjoying the process. If the captain of the ship picks the right place to fish, the rich catch is guaranteed!

The second way – trolling or deep-sea fishing – is more for professionals and requires certain skills. This fishery is usually chosen to get large fish from the ocean, such as kingfish, barracuda or even little shark. Several special spinning rods are thrown overboard the yacht, and your yacht races across the sea, waiting for good luck. Such fishing can last for several hours until the fish are caught, and there is no catch at all. But regardless of the outcome of trolling fishing, you can still enjoy the sensations of the wind around you, the spatter of the sea, the coastal panorama and the expectation of a big catch.

If you are interested in fishing, then going fishing in the UAE will be a great opportunity for you to get the fish out of the waters of the Persian Gulf or the Indian Ocean, to get a tremendous pleasure, a lot of impressions and bring with you memorable photographs with unprecedented trophies.

The Architecture of Consumption: Shopping Centers as an Exhibition Object - 8.08.21
Оставьте комментарий Cancel reply
Latest Articles
21:58
Is a Credit Card Required in Dubai: In Any Case, You Need a Credit Card On Your Dubai Vacation
20:49
You Have to Tip in Dubai: With a Few Dirham You Can Reach a Lot
21:25
Atlantis The Palm Dubai Lobby: The Atlantis The Palm Dubai Lobby is Very Impressive for Visitors
16:21
JA Oasis Beach Tower: You Have a Great View from the JA Oasis Beach Tower in Dubai
19:47
Aura Sky Pool: The Highest 360-Degree Infinity Pool in the World is Only in Dubai
19:54
10 Highest Hotels in Dubai: In the Emirate of Dubai There are Many Tall Hotels with Great Views
20:27
Sharjah International Airport: Home Airport of Air Arabia
17:36
The Biggest Myths About Dubai: Is It True
14:52
The Ukrainian Charitable organization appeals to the world community to help Ukrainians affected by the war in Ukraine
18:19
Yas Island Rotana: Yas Island in Abu Dhabi
MyDubai.Media » News » UAE Traditional Crafts: Fine Pearls and Big Fish