Top Theme Parks in Dubai and Abu Dhabi: Where to Go with Kids 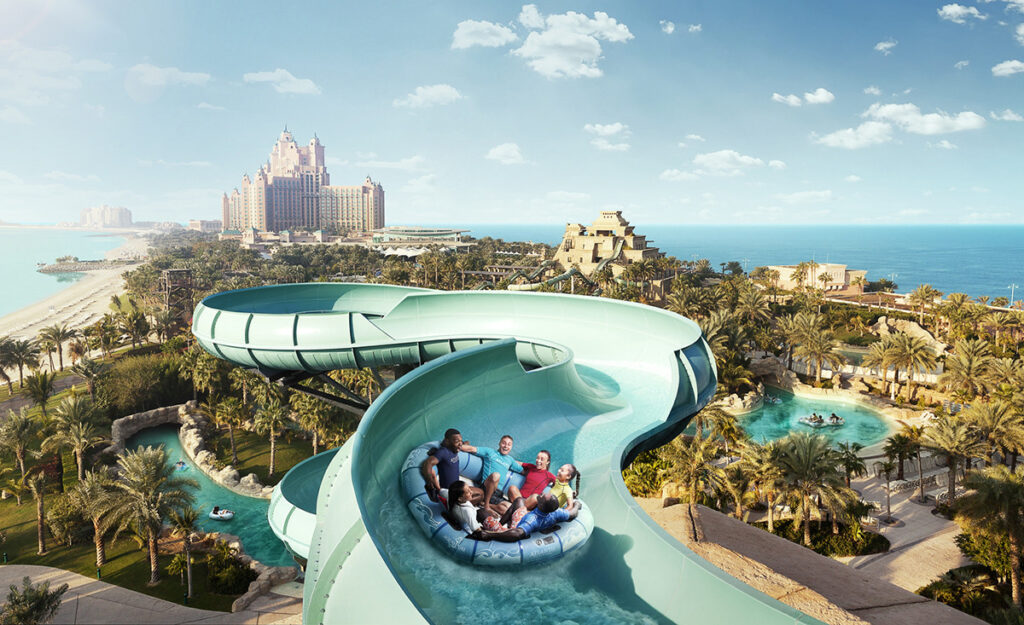 In this article, we will look at all the most exciting theme parks in Dubai and Abu Dhabi (UAE), which are a must-visit for both adults and children, regardless of the season of the trip.

In the United Arab Emirates, they are used to buildings that amaze with their size and luxury. Therefore, it is logical that the most exciting amusement parks are concentrated in this particular country. For vivid impressions and a fresh portion of adrenaline, tourists usually go to Dubai and Abu Dhabi. And in this article we will tell you about five unique theme parks that you should definitely visit at least once in your life.

Legoland Dubai: the Dream of All Children and Some Adults

One of the attractions in Legoland

Legoland is a grandiose amusement park from the popular Lego brand. There are many unique attractions and entertainment with professional animators.

Almost all structures in the park are built from Lego parts, and in total, the construction of the park took about 60 million constructor parts. By the way, this particular park in Dubai is the largest of all Legolands in the world.

The park is conventionally divided into six thematic zones. They have both active games for little fidgets and developmental activities that train logic and thinking. At the Lego factory, you can see how the same world-famous constructors are created, in Lego City, children can try on different professions, and in the LEGOLAND® Water Park you can have a lot of fun with the whole family.

Motiongate: a Journey into the World of Cinema

You can take great photos

Have you dreamed of being on the other side of the screen while watching a movie? At Motiongate Theme Park in Dubai, it’s possible. Three giant film studios took part in its creation: Sony Columbia Pictures, Dreamworks Animation and Lionsgate. And the result is a whole world filled with magic and extreme.

Scenes from well-known films and cartoons come to life here:

Visitors on vacation in the UAE can see their favorite characters and take some photos with them. It is also interesting to visit the Backlot Tour, here on the excursion they tell about the stages of creating Hollywood films: from the birth of an idea to the premiere.

And for the extreme, Motiongate Park has some cool rides:

In this park, entertainment events are held every day, in which even spectators take an active part. A visit to Motiongate will appeal to everyone without exception – both children and adults.

For a Dose of Extreme at IMG Worlds of Adventure

One of the exciting attractions in the park

This park is famous for its steep roller coasters that will take the breath away from even the biggest extreme. Its area is 28 football fields in size, and the number of various attractions allows you to spend at least a whole day in the park and never repeat yourself in entertainment.

For example, in the Lost Valley, you can see up to 70 species of animatronic dinosaurs that have been recreated in life size. There is also a hill with steep bends The Velociraptor, it develops a speed of up to one hundred kilometers per hour and has access to the street.

On the 3D Hulk Epsilon Base attraction, you can feel like a movie hero, and on the Marvel Dining Experience slide, children will really like it, because their favorite characters are waiting for them there – Spider-Man, Thor, Avengers, Hulk, Iron Man and many other heroes from Marvel Entertainment …

A significant plus of IMG Worlds of Adventure is that it is fully indoor and equipped with a powerful air conditioning system. Considering that the climate in Dubai is quite hot, it is very pleasant to be in the cool, fresh premises of the park. And this is provided that about 20,000 tourists visit the attractions every day.

The first thing that fascinates tourists is the sheer size of the Ferrari Park. He occupied the territory of the artificially created island of Yas. Fans of car racing and those who are not indifferent to attractions come here.

The main attraction of the park is a giant glass tunnel. Inside it, tourists will find a lot of entertainment, and the most popular is a Formula 1 simulator. If you dreamed of trying yourself as a race car driver, here your dream will definitely come true, and with lightning speed.

Also in this park are the fastest slides in the world, their speed reaches 240 km / h. And if you are looking for such an adrenaline rush to make your blood boil, then welcome to the central tower of Ferrari World. Here, on the “G-Force” attraction, tourists get into a capsule, and it shoots through the roof to a height of 62 meters.

The creators of the park did not limit themselves only to their love for Ferrari cars and created a walking area called “Little Italy” on the territory. Here you can walk along the Amalvi embankment, see a copy of Venice and even the Colosseum.

With tickets available at Ferrari Park or Warner Brothers, you have the opportunity to take advantage of the free transfer from Dubai to Abu Dhabi.

Warner Bros Theme Park is all about the film industry. Its foundation and inspiration was the Hollywood of the Golden Era. Due to its grand scale and impressive architecture, this park can be safely called a mini-city.

29 dizzying rides, scenery from your favorite films, familiar characters around – and all this under the dome of an artificial sky. The spirit of adventure and mischief reigns here, even restaurants and shops are stylized as Warner Bros, so that visitors can fully immerse themselves in the atmosphere that the creators of the park wanted to convey.

Post Views: 185
Related posts:
If you have found a spelling error, please, notify us by selecting that text and pressing Ctrl+Enter.

The Architecture of Consumption: Shopping Centers as an Exhibition Object - 8.08.21
Оставьте комментарий Cancel reply
Latest Articles
21:38
9 Facts about Emirates Airlines: Here You Can See Some Facts about Emirates Airline
21:39
Rixo’s The Palm Dubai: A Beautiful Beach Hotel in Dubai is the Rixos The Palm Dubai
19:34
More About Transport: The Tram in Dubai
21:05
Dubai Water Bus: The Dubai Water Bus is a Great Way to Explore the Marina and the Dubai Creek
16:30
Which Airport in Dubai: Where You Can Land
19:54
How Does a Doctor Visit in Dubai: You Do Not Have To Be Afraid
22:58
Air Arabia: Airline from Sharjah
19:25
Where the Sands: 10 Good Reasons Why You Absolutely Have to Go to Dubai
21:57
Safety in Dubai: Dubai is Considered One of the Safest Countries in the World
09:28
Everything You Need to Know About the Forex Traders Summit 2023
MyDubai.Media » Articles » Top Theme Parks in Dubai and Abu Dhabi: Where to Go with Kids