The Architecture of Consumption: Shopping Centers as an Exhibition Object 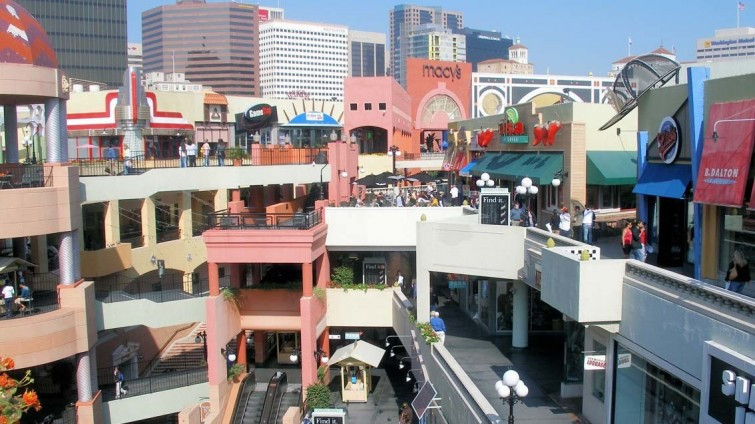 For some they are important meeting places, for others the symbol of capitalism: shopping centers have always excited people. The Munich exhibition “World of Malls” invites you to take a journey through time through the world’s major shopping centers – with both positive and negative examples.

At the beginning of the exhibition, you actually feel as if you had landed in one of these shopping malls: “World of Malls” is written in bright, yellow-red neon letters on the wall, the shop windows are lined up on the right and left, the air smells slightly perfumed – the only thing missing is the notorious department store music.

At first glance, one might think that the Pinakothek der Moderne celebrates these “architectures of consumption”. But it is a bit more complicated. But that’s not true, you play with the symbols of commerce and shopping frenzy, after all the wealth of information comes together to create a differentiated picture.

Cross-section Through the World of Shopping

23 selected shopping malls from all over the world are the subject of the exhibition. Using large-format photos, construction plans, sketches, and models, each shopping center with its architectural and everyday features is presented individually – from Munich to Caracas, from the 1950s to today. In addition, interviews with architects, investors, and activists as well as a number of figures from the category of useless knowledge.

Overall: a very material-rich and thoroughly representative cross-section through the shopping world.

Big names like Norman Foster, David Adjaye, or Frank Gehry are represented, but they are more of an exception. Not surprisingly. There are better jobs for prestige than a shopping center, explains curator Simone Bader:

“It is actually the case with many architects that they do not want to introduce themselves to the public with the shopping mall project. One of the most important reasons is that they usually cannot design the shopping center completely. They are subject to strict regulations and specifications made by the operators. For example, they often have no influence whatsoever on interior design.”

More than a Place to Shop

The shape and function of shopping malls have definitely changed over the past decades: The shopping malls have increasingly moved from the suburbs, from the outskirts to the center, they are no longer just shopping, but places of experience and leisure, offering living space and entertainment and culture. Associated with this, architecture, beyond standard design and standardized components, is also playing an increasingly important role. You can see all of this in the Munich exhibition.

A German showcase project is the Höfe am Brühl in Leipzig, complete with a parking garage and atrium – apartments that fit into the city center in a playful and detailed manner and complement the surrounding shops instead of marginalizing them. The example of “Las Arenas” in Barcelona shows how outdated places, in this case, a bullring, can be made attractive again through well-planned renovations.

But there are also negative examples, such as the mammoth Munich project “Schwabylon” from the 1970s, which was demolished only a short time after its opening due to poor planning and financial difficulties. Also visually an asset. And the consequences of the opening of the Centro in Oberhausen (1996) are well known: the citizens lost their old city center, shops had to close, jobs were lost, and public space is practically dead today.

The Mall of the Emirates

Because that too becomes clear: a mall with its implicit rules and prohibitions is only ever intended for a certain audience and is geared towards one main purpose: consumption. In this respect, it is only honest when a building like Horton Plaza in San Diego shows the garish, colorful and artificial all too clearly, even stages it. After all: the Canyon-like construction is impressive. Or when the insane gigantism of a ski hall in Dubai in the middle of the shopping mile “The Mall of the Emirates” is realized. Winter Wonder Shopping Land – Greetings from Walt Disney!

The export of this western concept to the rest of the world also has its pros and cons:

“In the Arab countries, but also in South America and Africa, the mall plays a different role: These are important meeting places where people feel free, but on the other hand, these places are also targets of terrorist attacks because it is a western product that comes from America.”

The exhibition saves the raised index finger or bold messages. Instead, it offers a lot of text, a lot of illustrative material, and a lot of information. Pros and cons. Sober tone. The assessment is left to the visitor. Given such a controversial topic, that will annoy those who think that the uninformed consumer must be educated for the better. The clarification, however, is beneficial that precisely this is avoided.

Post Views: 97
Related posts:
If you have found a spelling error, please, notify us by selecting that text and pressing Ctrl+Enter.

The Architecture of Consumption: Shopping Centers as an Exhibition Object - 8.08.21
Оставьте комментарий Cancel reply
Latest Articles
21:38
9 Facts about Emirates Airlines: Here You Can See Some Facts about Emirates Airline
21:39
Rixo’s The Palm Dubai: A Beautiful Beach Hotel in Dubai is the Rixos The Palm Dubai
19:34
More About Transport: The Tram in Dubai
21:05
Dubai Water Bus: The Dubai Water Bus is a Great Way to Explore the Marina and the Dubai Creek
16:30
Which Airport in Dubai: Where You Can Land
19:54
How Does a Doctor Visit in Dubai: You Do Not Have To Be Afraid
22:58
Air Arabia: Airline from Sharjah
19:25
Where the Sands: 10 Good Reasons Why You Absolutely Have to Go to Dubai
21:57
Safety in Dubai: Dubai is Considered One of the Safest Countries in the World
09:28
Everything You Need to Know About the Forex Traders Summit 2023
MyDubai.Media » Articles » The Architecture of Consumption: Shopping Centers as an Exhibition Object