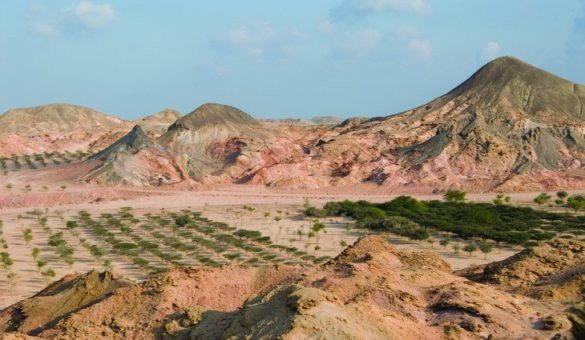 Sir Bani Yas is an extraordinary island in the United Arab Emirates that is a special pearl. It is located approximately 250 kilometers from Abu Dhabi in the Persian Gulf and can be reached by boat or plane. Unlike the completely artificial islands of Dubai, protected Syr Bani Yas offers an incredible variety of plants and animals.

In the past, there were only stones and sand on a naturally formed island. Sheikh Zayed bin Sultan Al-Nahyan started another “green” project 40 years ago, which eventually turned into a prosperous paradise island. Sheikh Zayed has settled endangered animals in his oasis for which people can expect a huge fine. The Arabian Wildlife Park is the island’s main attraction. However, comparisons with safaris in South Africa are not appropriate.

How to Get to the Island

If you want to get to Sir Bani Yas Island, it would be logical to fly to Abu Dhabi. From this airport, you can go to the island on light aircraft of Empire Aviation and Abu Dhabi Aviation. The cost of the flight is about 150 dollars.

The second option involves a trip from Abu Dhabi west to the town of Ruwayce, and from there you will go to the island by boat.

The best time to travel to Sir Bani Yas is the months from September to May when daytime temperatures range from 25 to 35 degrees. In summer it can be very hot, up to 42 degrees by day.

The island, which covers 50 square kilometers, is astonished by its rare plants, trees, giraffes, the world’s largest herd of Orix antelopes, gazelles, llamas, and steppe sheep.

The reserve has about 12,000 different animals. The natural balance of the park is provided by cheetahs, golden jackals, hyenas, and wild cats.

Tourists can see wild animals on safari on the island. Early morning tours are especially recommended when animals often get very close to cars. However, it is clear that this ecosystem is artificial. Almost 2.5 million trees, such as acacia, cedars, date palms, or fruit trees, can thrive only with human help. Their survival is ensured by a desalination plant built on the mainland specifically for the irrigation of the island.

The island of Syr Bani Yas has three large hotels, white long sandy beaches, and numerous opportunities to discover the island, the original landscape of which can be admired in the natural mountain area.

Dry, sandy soils, barren rock formations, and peaks that rise to 134 meters – none of this would be of interest to people unless there were artificial gardens and other ecosystems on the island.

If you do not want to travel the island on foot, you will have many alternatives: kayaking, riding, cycling, or driving. In addition, Sir Bani Yas offers such entertainment as diving, deep-sea fishing, snorkeling, etc.

Local dishes such as spicy lamb with rice or spicy rice fish are available on the island. These dishes are served in hotels, along with typical drinks such as Irene, black tea, or strong black coffee.

Sir Bani Yas is a green oasis in the Persian Gulf, a living dream of Sheikh Zayed, who sought a celestial retreat. Today the island is open to the public, so travelers can now enjoy the magic of this exotic garden and pursue their secret dreams.

Syr Bani Yas is one of the most important archaeological sites in the Middle East.

To date, 36 archaeological sites have been discovered, including a 4,000-year-old circular tomb, a fortified watchtower, a mosque, and the remains of a pre-Islamic Christian settlement, which are open to visitors.

Named after the Bani Yas, one of the oldest and largest tribes in the Arabian Peninsula, Syr Bani Yas has a long history of human settlement. In fact, the first people are believed to have arrived on the island some 7,500 years ago, before the inhabitants of what is now called the United Arab Emirates.

The island was first mentioned in European literature in the late 16th century when it was marked as a pearl-rich island. In the 1820s and 1850s, it was also described in detail by British naval officers who inspected the waters of the Persian Gulf.

In the last few decades, since the first explorations and excavations began, 36 archaeological sites have been discovered, each of which provides a distinct picture of the rich history of the island. These include a circular tomb, about 4,000 years old, a fortified watchtower, a mosque, and signs of an ancient pearl mining industry.

One of the oldest sites was excavated between 1993 and 1996 under the patronage of the late Sheikh Zayed. This site is the remnants of a pre-Islamic monastery dating back to the year 600 AD.

The Christian monastery is believed to have been the home of a community of monks and is considered the only permanent settlement and the only pre-Islamic Christian site ever established on the island.

The cheapest of these hotels is the Anantara Desert Islands Resort & Spa, but even this hotel is considered very expensive. It is expensive even by UAE standards. During the low season, the price of this hotel is at least $250 for a double room with breakfast. At the same time, the food and drinks in the hotel are quite expensive. Therefore, it would probably be advantageous to visit this island for a tour.

Unfortunately, popular tour companies working with tourists in Dubai, Sharjah, Ajman, and other Emirates do not offer a tour of Sir Bani Yas. You can get to this island by yourself in a Seawings waterplane.

The special package includes safaris on the island, during which you can see free-living animals in the wild, such as cheetahs, giraffes, and Arabic orix. Also included in the package is a dinner at Anantara Desert Islands Resort & Spa.

The aircraft can accommodate up to nine passengers, so the tickets are sold very quickly. The flight from Abu Dhabi to Sir Bani Yas takes 55 minutes and from Dubai (1 hour 10 minutes).

The Architecture of Consumption: Shopping Centers as an Exhibition Object - 8.08.21
Оставьте комментарий Cancel reply
Latest Articles
20:49
You Have to Tip in Dubai: With a Few Dirham You Can Reach a Lot
21:25
Atlantis The Palm Dubai Lobby: The Atlantis The Palm Dubai Lobby is Very Impressive for Visitors
16:21
JA Oasis Beach Tower: You Have a Great View from the JA Oasis Beach Tower in Dubai
19:47
Aura Sky Pool: The Highest 360-Degree Infinity Pool in the World is Only in Dubai
19:54
10 Highest Hotels in Dubai: In the Emirate of Dubai There are Many Tall Hotels with Great Views
20:27
Sharjah International Airport: Home Airport of Air Arabia
17:36
The Biggest Myths About Dubai: Is It True
14:52
The Ukrainian Charitable organization appeals to the world community to help Ukrainians affected by the war in Ukraine
18:19
Yas Island Rotana: Yas Island in Abu Dhabi
18:36
Dubai Safari Park: A Beautiful Zoo in Dubai
MyDubai.Media » Articles » Sir Bani Yas: Amazing Flora and Fauna. Great Views of the United Arab Emirates
Posting....