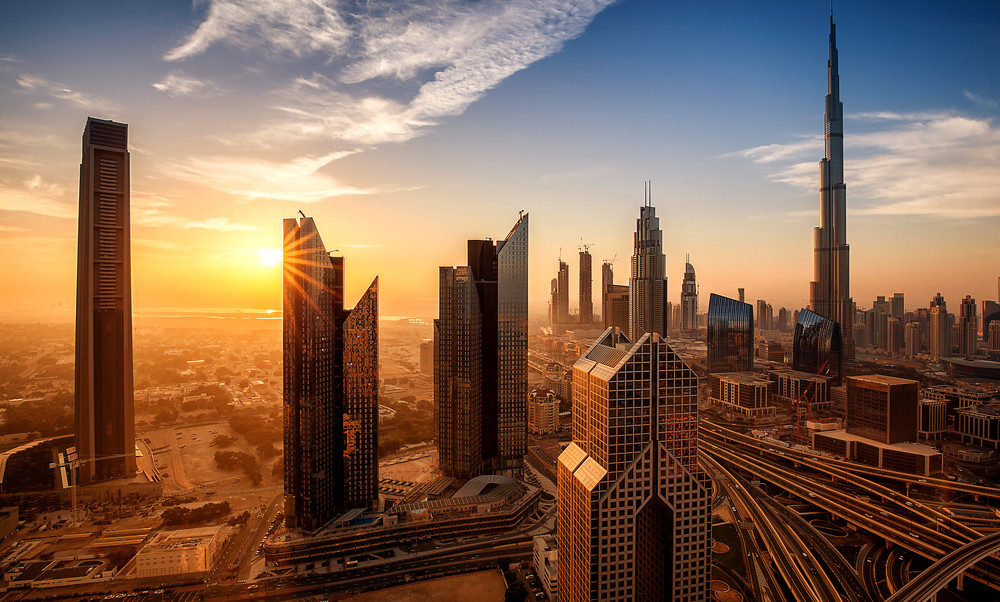 The largest city in the United Arab Emirates, Dubai, is a city of superlatives. Immense skyscrapers – the Burj Khalifa, with its 818 meters height, is the highest tower in the world – gigantic shopping centers dedicated to luxury, urban and impressive pharaonic architectural projects characterize them.

The black gold is the basis for the continuous development of the city. Originally a dry desert and a small fishing port, Dubai has become one of the most famous cities in the world. The luxury apartments equipped with all modern comforts with panoramic views over the harbor or the center make up a large part of the luxury real estate park in the metropolis.

However, other types of property are also available, in neighborhoods such as the exclusive community of Al Barari, typical of grand luxury garden villas. Another unique project in Dubai is the ensemble of the three artificial island worlds Palm Islands, which saw the light of day with Palm Jumeirah. The latter houses three types of luxury villas – ‘Signature Villas’, ‘Garden Homes’ and ‘Canal Cove Town Homes’ – but also luxury apartments and 5-star hotels. Also, don’t forget that when the heat gets unbearable there is always a chance to go skiing in the Emirates shopping mall.

The chairman of Damac, one of the largest real estate groups in Dubai, speaks of “two more difficult years” that he expects. Since 2014 Dubai has repeatedly announced the turnaround, but prices have fallen again and again. Together with the US President’s Trump real estate group, Damac has built golf courses in Dubai and gated communities.

Because of the doldrums on the Dubai property market, his company’s shares lost 56 percent of their value within a year. Damac’s profits slumped more than half last year to the equivalent of $ 330 million, despite the fact that the company completed more than ever before with 4,100 apartments.

Foreigners have only been allowed to buy real estate in Dubai since 2002. They quickly advanced to become a coveted, affluent target group. To date, the city has attracted more than 1,000 millionaires from other countries with mega-projects, more than Los Angeles, Melbourne, or New York.

But it is not the first time that the real estate market has been suffering from a drop in prices. The financial crisis after 2008 in particular left its mark. At that time, the emirate suffered so much that it had to ask its big brother in the United Arab Emirates (UAE), Abu Dhabi, for a $ 20 billion rescue package. That is why the tallest house in the world, the Burj Khalifa, was named after the UAE President Khalifa bin Zayed Al Nahyan, who came from Abu Dhabi.

While numerous villas shine today on the famous Palm Jumeirah, an artificially raised palm island in the sea, work on the second and third palm projects, which were to become much larger archipelagos, have come to a halt. The world project, in which a group of islands resembling a map of the world was raised around four kilometers off the coast of the emirate, had a similar experience.

After the financial crisis, many plans were put on hold. Many owners and real estate companies suffered losses in the financial crisis, and mountains of debt piled up. Meanwhile, the sea and the wind have blurred the contours of some of the islands. But the plans have not officially been abandoned. Before the great Dubai crisis, Josef Kleindienst had bought six islands on the world map.

Mohamed Alabbar, Chairman of Emaar Property, Dubai’s largest listed real estate group, is also positive. Among other things, the group has built the Burj Khalifa. Emaar Property was able to increase its net profit by almost 30 percent to just under two billion dollars last year – with sales of around seven billion dollars.

Alabbar believes that the supply and demand for real estate in Dubai will “balance each other out again and prices will rise” in the near future. In order to be better positioned by then, Emaar has formed an eight billion-dollar joint venture with Aldar, the most powerful real estate company in the main emirate of Abu Dhabi.

Together they are planning further major projects such as the Emaar Beachfront in Dubai or the expansion of Abu Dhabi’s artificially expanded island of Al Saadiyat. “This merger strengthens our economy in global competition”, praises Dubai’s Emir Mohammed bin Rashid Al Maktoum.

The big real estate developers are now hoping that the expo will turn the tide. Innovations should also convince investors. The first small white houses made from 3D printers are already in the shadow of the Emirates Towers. The first 3D-printed skyscraper is set to grow into the sky shortly.

Brokers are speaking of increasing interest. The business is still not a sure-fire success. Salespeople need to attract with incentives. So-called off-plan transactions, discounted sales of real estate before construction begins, are playing an increasingly important role, says Ivana Vucinic, head of advisory services for the Chestertons broker in the region.

More and more developers are offering discounts and incentives such as free registration, guaranteed rental income, and innovative payment plans. The government wants to help the paralyzing real estate sector with long-term visas for investors. The visas are valid between ten and 30 years. In addition, there are now long-term visas for people who want to spend their retirement in Dubai.

Critics, however, come across the fact that too much attention is paid to foreign investors in the construction. “The city needs to rethink its demand approach, which aims to attract international buyers who are mainly speculators,” urges Mahmoud Hesham El Burai of Dubai’s Real Estate Regulatory Agency.

Only if affordable living space is built in the future can a growing middle class be sustainably catered for. At least the emir wants to build apartments for 8.7 billion dollars that are well below market prices – for people who earn up to 15,000 dirhams (around 3700 euros) a month.

But Expo 2020 is still floating above everything, which must be a success and have an impact beyond the event. The pavilions are not intended to be throwaway architecture, but rather to be used later. That is quite realistic: Siemens wants to set up its global logistics center thereafter the Expo. Dubai’s new airport is in the immediate vicinity. The subway line will be extended to the Expo site, and beyond the world exhibition, spectacular buildings by star architects such as Foster + Partners should attract visitors. The only thing missing is the power of investors.

How is the Real Estate Market Developing in Dubai?

In the first half of 2020, transactions with a value of 16.3 billion euros were made. In the same period, the Dubai Marina recorded a sales high of 770 million euros. The average purchase price is 253,000 euros for an apartment and 550,000 euros for a villa. A significant proportion of the investors were women: They made investments totaling 1.51 billion euros.

Growing Market at all Levels

“We wanted to give people the ability to buy a property at an affordable price so tenants could become owners,” said Fred Durie, Managing Director of Nshama Property Developers. “At the same time, the conditions had to be right. If you rent, the money is lost. As an owner, you have an asset that you can sell when you retire or leave Dubai.”

2020 was a difficult year for the real estate industry worldwide. Analysts expect a further recovery of the market in Dubai due to the upcoming Expo. Chris Speller, Group Director, CityScape and Informa markets: “My prediction is that we will see a gradual return of confidence in the market. Much faster than expected and from the first quarter of next year there will be real confidence in the real estate markets again.”

Post Views: 95
Related posts:
If you have found a spelling error, please, notify us by selecting that text and pressing Ctrl+Enter.

The Architecture of Consumption: Shopping Centers as an Exhibition Object - 8.08.21
Оставьте комментарий Cancel reply
Latest Articles
09:28
Everything You Need to Know About the Forex Traders Summit 2023
16:42
Abu Dhabi Mall: The Mall in the Center of Abu Dhabi
21:58
Is a Credit Card Required in Dubai: In Any Case, You Need a Credit Card On Your Dubai Vacation
20:49
You Have to Tip in Dubai: With a Few Dirham You Can Reach a Lot
21:25
Atlantis The Palm Dubai Lobby: The Atlantis The Palm Dubai Lobby is Very Impressive for Visitors
16:21
JA Oasis Beach Tower: You Have a Great View from the JA Oasis Beach Tower in Dubai
19:47
Aura Sky Pool: The Highest 360-Degree Infinity Pool in the World is Only in Dubai
19:54
10 Highest Hotels in Dubai: In the Emirate of Dubai There are Many Tall Hotels with Great Views
20:27
Sharjah International Airport: Home Airport of Air Arabia
17:36
The Biggest Myths About Dubai: Is It True
MyDubai.Media » Real Estate » Real Estate Market in Dubai: Stable Despite Corona Crisis