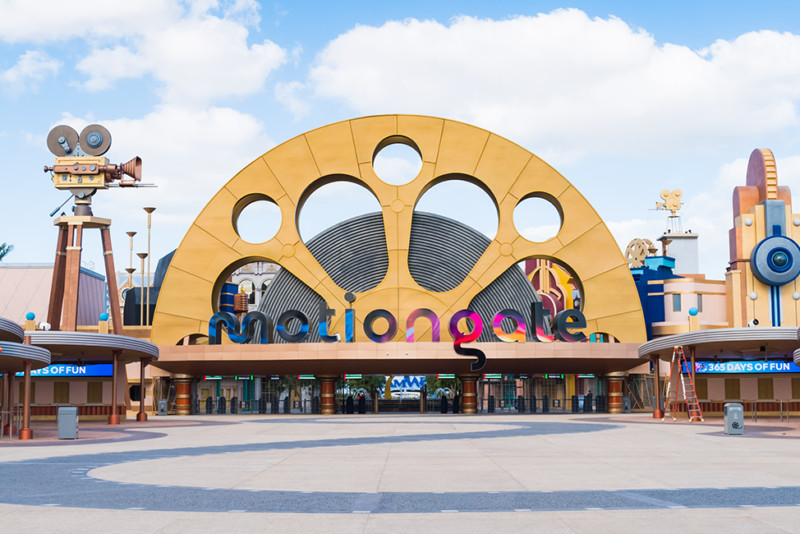 A well-known amusement park is Motiongate Dubai which offers a particularly large number of attractions for the whole family. It is located at Dubai Parks and Resorts far from the city center. There are numerous other amusement parks that you can visit. So it is recommended that you plan a lot of time there and maybe look at several at the same time.

The theme park opened on December 16, 2016, and thousands of visitors have flocked there every day since that day. However, the number of visitors is also different. During the week you have your peace and quiet and you can look at the park in peace.

But at the weekend you always have to expect a lot of visitors. Because this is where the guest workers come who want to experience something in the metropolis. The pre-opening was on October 31, 2016, and selected visitors were able to test Motiongate Dubai in advance.

The theme of Motiongate Dubai is Hollywood itself, and those who have already seen the numerous films in the cinema will be thrilled there. In cooperation with some well-known Hollywood companies, you will find numerous spectacular attractions there that you can see. The amusement park is set up in different zones. These are Studio Zentral, Columbia Pictures, Smurfs Village, Dreamworks, and Lionsgate.

There is a suitable attraction for every visitor. For example, from a roller coaster to shows. There you can take a look behind the scenes of the film industry and you’ve probably wondered how it’s actually done. There is even a real film set in Studio Central and you can watch it live.

A well-known attraction at Motiongate Dubai is the Capitol Bullet Train. This is a roller coaster where you have to be a little brave to ride there. The Panem Aerial Tour where there is a great 4D simulator is also very nice. A kind of roller coaster not to be missed is the Hotel Transylvania. From Dracula to Frankenstein there is everything to see there.

READ: The 8 Best Hotels in Central Park: Where to Stay During Your Trip

Underworld 4D is also very popular, where you can experience an adventurous journey. Other attractions include Ghostbusters: Battle for New York or The Green Hornet: High-Speed Chase. In principle, there is something there for every visitor. Those who would like to ride a fast roller coaster can do so there. If you want it a little quieter then you should use the children’s carousel.

For a day ticket, you have to pay 175 dirhams per person. Entry is a bit cheaper for the children. But it is always recommended that you buy a ticket where you can combine several parks with each other. Then you always save money and can also look at the others.

Admission for just a single-day ticket is always the most expensive. Furthermore, there are always offers where you can save money. The entrance fees are a bit cheaper, especially during the hot summer months. During the main season in Dubai over the winter there are usually no discounts and you have to pay the regular entrance fee.

There is no exact address for the amusement park. You just drive on Sheikh Zayed Road towards Jebel Ali. Then there is a big sign where you have to drive out. In principle, Motiongate Dubai cannot be missed as it belongs to Dubai Parks and Resorts. You can see the whole area from afar from the motorway. Furthermore, you should know that there is no Dubai Metro station nearby.

READ: Arabian Tales of the XXI Century: Why to Travel to Dubai in Winter

The last one is at Ibn Batutta Mall and from there it’s a few kilometers. You can take a taxi there if you want. But if you take a taxi from the Dubai Marina it takes 30 minutes. But the drivers know the way and you can get there without any problems. There is also plenty of parking space where you can park your car. But you have to pay around 20 dirhams for parking there.

The park is structured in such a way that there are numerous restaurants and shops. If you are hungry then you can visit one of the restaurants. You can find everything you want from pizza to burgers. But you are not allowed to bring any food or drink with you to Motiongate Dubai Park. Then there are many shops where you can buy souvenirs.

But the prices are not that cheap there. You can get the same Dubai souvenirs much cheaper in the Old Souk in Deira. But wherever there are always many tourists, the prices are of course a bit more expensive.

There is also a hotel located directly on the premises of Dubai Parks and Resorts. It is the Lapita Hotel with 504 rooms. Since the amusement parks are far outside of Dubai’s center, you can stay there if you want. It is a very nice and new hotel. You can see the amusement parks directly from the rooms. In just a few minutes you are there and can visit them.

Post Views: 126
Related posts:
If you have found a spelling error, please, notify us by selecting that text and pressing Ctrl+Enter.

The Architecture of Consumption: Shopping Centers as an Exhibition Object - 8.08.21
Оставьте комментарий Cancel reply
Latest Articles
09:28
Everything You Need to Know About the Forex Traders Summit 2023
16:42
Abu Dhabi Mall: The Mall in the Center of Abu Dhabi
21:58
Is a Credit Card Required in Dubai: In Any Case, You Need a Credit Card On Your Dubai Vacation
20:49
You Have to Tip in Dubai: With a Few Dirham You Can Reach a Lot
21:25
Atlantis The Palm Dubai Lobby: The Atlantis The Palm Dubai Lobby is Very Impressive for Visitors
16:21
JA Oasis Beach Tower: You Have a Great View from the JA Oasis Beach Tower in Dubai
19:47
Aura Sky Pool: The Highest 360-Degree Infinity Pool in the World is Only in Dubai
19:54
10 Highest Hotels in Dubai: In the Emirate of Dubai There are Many Tall Hotels with Great Views
20:27
Sharjah International Airport: Home Airport of Air Arabia
17:36
The Biggest Myths About Dubai: Is It True
MyDubai.Media » Articles » Motiongate Dubai: Kids Say “Yes”