Milk and Chocolate from the Desert: Dubai’s “White Gold” 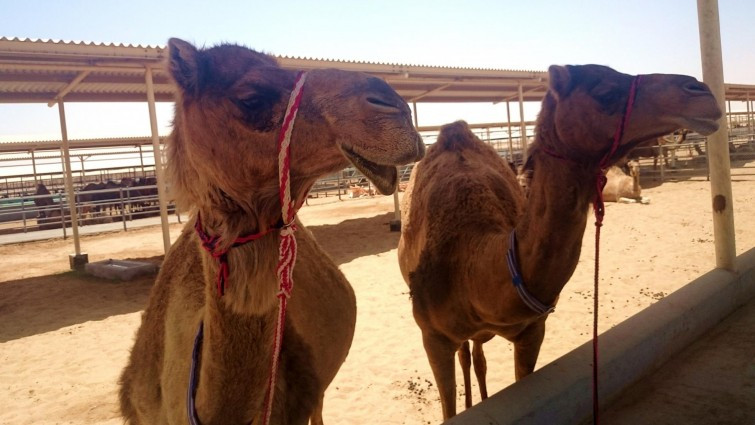 Dubai is a glittering world of luxury: Spectacular skyscrapers and oriental markets shape the cityscape of the Emirates on the Persian Gulf. However, things are anything but glamorous on a camel farm on the outskirts of the city. Over 4,000 camels deliver the milk for Dubai’s “white gold” there.

Umm Nahad, half an hour’s drive from Dubai:

The motorway here has six lanes and runs straight through the desert. Even so, almost no one is around here. The skyscrapers, fashionable shopping centers, and luxurious residential areas, the foreign specialists, disappear in the rear-view mirror.

“We are here on the outskirts of Dubai and yet in the middle of the desert and our 4,200 camels are spread over the entire area, where there is also plenty of space for the camels to move around.”

Kirsten Lange works for “Emirates Industry for Camel Milk & Products”. The company does not produce crude oil or natural gas, but a white liquid: camel milk. For drinking, but also to make chocolate out of it. Only those who have their car tires disinfected by the security service come onto the site. You could bring in bacteria. With the exception of Friday, the Muslim holiday, there are daily tours for tourists. Camel milk tasting included.

Caresses and Organic Carrots for Lots of Milk

On the farm, camels are kept on an area of 1.5 square kilometers – an area the size of 210 football fields. Here the camels are petted and pampered with organic carrots. This is a treat for them because after all there are no carrots in the desert. The animals should feel good and give plenty of their valuable milk.

“A lot of people will think it’s going to be a very bitter taste, compare that in their minds to goat’s or sheep’s milk. It is very interesting to watch when you drink camel milk, which is much softer in taste, it tastes full-bodied, has less fat, and has a slightly salty finish.”

500 employees work at “Emirates Industry for Camel Milk & Products”. Most are from Bangladesh, India, and Pakistan.

Strict Hygiene in the Production Area

If you want to go into the production area, you first have to put on protective clothing – this is required by hygiene regulations. Kirsten Lange inspects the milking parlor and the milking machines. Like cows, camels have four teats that sit in the groin area. Milking takes place twice a day:

“During milking, it is immediately cooled down to six degrees and brought here. And here it is first checked whether the milk meets the quality requirements. The first samples are taken here, and only when the milk has been approved by the laboratory does it go into production.”

Camels are sensitive – and stubborn. They only allow themselves to be milked if they have previously suckled their calf, and during milking, the young animal must also stay close to its mother. If the camel lady is not in the mood, then you can still try, but she does not give out her milk.

The cows are professionally milked on the camel farm in Dubai.

Even if the mares are relaxed, in a good mood, and generous, you get a maximum of seven liters per animal and day. Compared to our Central European cows, who give between 25 and 40 liters a day, that is very little. This is also what makes camel milk so valuable. After milking, the camel milk is heated by the most modern machines, i.e. it is pasteurized at 75 degrees Celsius:

“It’s a very low temperature. This temperature ensures that the protein structure is retained, that the vitamins are retained because otherwise they cannot be sold under the motto: it is healthier than cow’s milk. And the taste remains softer.”

Bedouins Swear by the Healing Properties of Camel Milk

The current production is 6,000 liters of milk per day. Two-thirds of this are sold as fresh milk, the rest is mainly used to produce powdered milk, says Kirsten Lange:

“We are just in front of the freeze dryer. We do not produce the camel milk powder with heat, but with cold, which takes longer than the usual drying with heat. But the vitamin content is retained, which is very important for us because this is the basic product that is used in body care and which can also be used medicinally.”

The Bedouins of Arabia have lived in symbiotic relationships with their animals for thousands of years, and they swear by the healing powers of camel milk. While a cow in the desert climate sucks after four hours without water, the camel, thanks to its ability to store water in the red blood cells, can do without water for two weeks or more – and, hard to believe, there is still milk.

“Emirates Industry”, says Kirstin Lange, is working on making the camel livestock again – similar to the cow in Europe. Because nowadays the Emiratis only keep their camels as reindeer. Traditionally they feed their valuable animals with camel milk before a race, of whose power they are convinced:

“We are currently in the farm area, namely where we keep our camels. If you look back there, you have so-called paddocks, covered areas, there is a maximum of 25 camels per fenced area. You can’t keep camels in line, they are social animals that need their social group. They are usually fed with hay and alfalfa, which is green grass, fresh grass.”

The hay is currently being imported from Oman, and a separate farm has been set up for the fresh grass so that it can produce alfalfa itself in the long term.

“The camel groups live there, a maximum of 25 camels, usually up to 10 in a group. These groups are also changed. In other words, they don’t always stay in the same enclosure, but there is a rotation system so that they don’t start to get bored. A camel is quite clever, it also needs animation to be happy and content. The smarter such an animal, the more variety an animal has to have.”

The Architecture of Consumption: Shopping Centers as an Exhibition Object - 8.08.21
Оставьте комментарий Cancel reply
Latest Articles
21:58
Is a Credit Card Required in Dubai: In Any Case, You Need a Credit Card On Your Dubai Vacation
20:49
You Have to Tip in Dubai: With a Few Dirham You Can Reach a Lot
21:25
Atlantis The Palm Dubai Lobby: The Atlantis The Palm Dubai Lobby is Very Impressive for Visitors
16:21
JA Oasis Beach Tower: You Have a Great View from the JA Oasis Beach Tower in Dubai
19:47
Aura Sky Pool: The Highest 360-Degree Infinity Pool in the World is Only in Dubai
19:54
10 Highest Hotels in Dubai: In the Emirate of Dubai There are Many Tall Hotels with Great Views
20:27
Sharjah International Airport: Home Airport of Air Arabia
17:36
The Biggest Myths About Dubai: Is It True
14:52
The Ukrainian Charitable organization appeals to the world community to help Ukrainians affected by the war in Ukraine
18:19
Yas Island Rotana: Yas Island in Abu Dhabi
MyDubai.Media » Articles » Milk and Chocolate from the Desert: Dubai’s “White Gold”