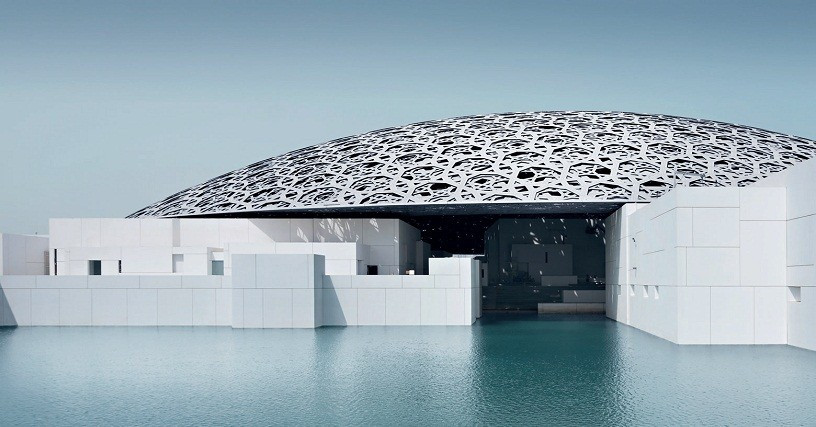 LOUVRE ABU DHABI is the first museum of its kind in the Arab world, dedicated to all of humanity at once, to the common experience of different civilizations and cultures.

French architect and Pritzker laureate Jean Nouvel built an entire city, not a museum, but an Arab medina in Abu Dhabi. This space is covered by an enormous 180-meter silver dome of 8,000 metal stars forming a complex geometrical structure. From the alleys «city» you can see the sea. In sunny weather, a movable pattern is formed under the dome, «rain from light», reminiscent of the interlacing of palm leaves in Arab oases.

The museum exhibits a selection of works of art and cultural monuments, some of which are rented from the best museums in France. It has everything from prehistoric artifacts to custom-made modern art. The Louvre of Abu Dhabi departs from traditional museography, where it is customary to place exhibits by epoch and country. Apart from the galleries, there is room for temporary exhibitions.

READ: Bedouins: From Camels to Toyotas

According to Mohammed Khalifa Al-Mubarak, Chairman of the Abu Dhabi Tourism Department, the museum’s curators sought to reflect the interconnectedness of everything in our world. It is a new word in the ancient tradition of cultural preservation that was laid down by the founders of the UAE.

The museum begins with the «Grand Lobby», where visitors are expected to acquaint themselves with the rituals of motherhood and burial. The comparison of exhibits from different countries, often very far apart, highlights the profound similarities of the canons, despite their superficial differences.

Among the exhibits in the gallery of antiquity are the artifacts of the first empires and early examples of figurative painting, for example, «Bactrian princess» created in Central Asia at the end of III millennium BC. The sarcophagi of Princess Hennutawi illustrate the funeral practices of ancient Egypt, and the Syracuse coin of decadrachma by Master Evenette tells of the creation of a new economy.

The Gallery of World Religions displays sacred books: the Blue Koran, the Gothic Bible, the Pentecostal, and Buddhist, and Taoist texts. The pottery collection illustrates the cultural exchange between countries along trade routes, both in the Middle Ages and in the New Times. The Japanese namban screen is an example of dialogue between Europe and the Far East.

The museum features an exceptional collection of varnished cabinets created by the French woodcutter Bernard II van Rizenburg. In the gallery of modernism, guests wait «Gypsies» Eduardo Mane, «Children’s Struggle» Poles of Gauguin, and «Composition with blue, red, yellow and black» Pete Mondriana. And in the section of modern art – monumental work of the artist Ai Weiwei dedicated to globalization.

Especially for the Louvre of Abu Dhabi, eminent contemporary artists created several works interacting with the spirit and architecture of the museum. The work of the American artist Jenny Holzer – three stone walls with engravings under the name «For the Louvre Abu-Dhabi».

Important historical texts are cited in the engravings: «Mukaddima» Ibn Khalduna, Mesopotamian bilingual Accado-Sumerian tablet with the myth about the creation of the world and annotated edition of «Experiments» by Michel Montaigne of 1588.

Italian Giuseppe Penone created several works for the museum. «Leaves of Light» is a large bronze tree with mirrors on branches that will reflect «rain of light». «Distribution» is a wall of porcelain tiles with concentric circles drawn by hand, which diverge from the fingerprint of Sheikh Zayed, the founder of the UAE. It is a collaboration with the French ceramic workshop Sèvres – Cité de la céramique.

According to Jean Nuvel, the architect of the Louvre Abu Dhabi, it took several years to build and renovate the museum, and as of November 2017 guests will finally be able to enter the Palace of Light, where the cultures of different countries and different historical eras meet. The Louvre of Abu Dhabi is an homage to Arab cities with their poetry, geometry, and light. The galleries feature work leased from 13 of France’s leading museums.

Here are some of the most significant: «The Beautiful Ferroniere» Leonardo da Vinci of the Louvre, a self-portrait of Vincent van Gogh of the Museum of the Orangery, a rare ivory salt shaker from the Benin Empire, the Globe of Vincenzo Coronelli of the French National Library, two Chinese vessels of huy, «Napoleon, passing through the Alps» Jacques-Louis David from Versailles, «Jean d’Er» from the sculpture group «Citizens of Calais» Auguste Rodin, the statue of Apollo Belvedere Francesco Primatico from the Palace of Fontainebleau and «Standing Woman II» Alberto Giacometti from the center of Pompidou.

A special exhibition on the occasion of the opening of the museum “From one Louvre to another” was opened on December 21, 2017.

It was dedicated to the history of the Parisian Louvre and was divided into three sections: the royal collection of Louis XIV at Versailles, the era of the Accademia with salons for artists, and, finally, the modern Louvre. The exhibition included 145 important paintings, sculptures, works of decorative art, and other items from the collections of the Louvre and Versailles museums.

Post Views: 117
Related posts:
If you have found a spelling error, please, notify us by selecting that text and pressing Ctrl+Enter.

The Architecture of Consumption: Shopping Centers as an Exhibition Object - 8.08.21
Оставьте комментарий Cancel reply
Latest Articles
09:28
Everything You Need to Know About the Forex Traders Summit 2023
16:42
Abu Dhabi Mall: The Mall in the Center of Abu Dhabi
21:58
Is a Credit Card Required in Dubai: In Any Case, You Need a Credit Card On Your Dubai Vacation
20:49
You Have to Tip in Dubai: With a Few Dirham You Can Reach a Lot
21:25
Atlantis The Palm Dubai Lobby: The Atlantis The Palm Dubai Lobby is Very Impressive for Visitors
16:21
JA Oasis Beach Tower: You Have a Great View from the JA Oasis Beach Tower in Dubai
19:47
Aura Sky Pool: The Highest 360-Degree Infinity Pool in the World is Only in Dubai
19:54
10 Highest Hotels in Dubai: In the Emirate of Dubai There are Many Tall Hotels with Great Views
20:27
Sharjah International Airport: Home Airport of Air Arabia
17:36
The Biggest Myths About Dubai: Is It True
MyDubai.Media » Articles » Louvre Abu Dhabi: Palace of Light