Jumeirah Mosque: One Of The Symbols Of Dubai And The Most Important Place For Muslims 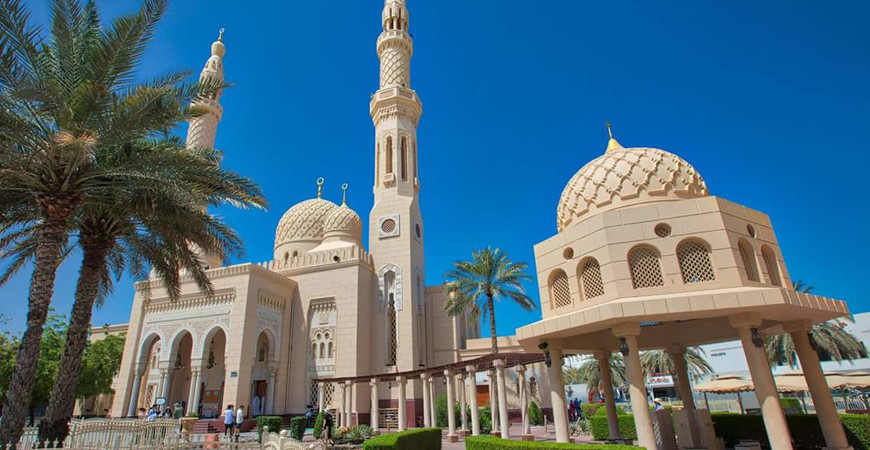 The Jumeira Mosque in Dubai is one of the few mosques in the country open to all visitors, regardless of their religion. The Sheikh Mohammed Cultural Cooperation Center (SMCCU), which operates at the Jumeira Mosque, is the reason for this opportunity. The main purpose of the center is to promote tourists studying the culture and religion of the United Arab Emirates. The Jumeira Mosque has become one of Dubai’s most popular attractions, and its image can be seen on the 500 dirhams bill.

The establishment of a mosque that could be visited by adherents of other religions was the main idea of the Sheikh and, under his leadership, the Sheikh Mohammed Centre for Cultural Understanding was established in 1998 to provide guided tours for non-Muslims. Later, the Sheikh Zaydah Mosque in Abu Dhabi and the Al Farooq Umar Ibn Khattab Mosque in Dubai was opened to the public.

Architectural Features of the Jumeira Mosque in Dubai

The official opening of the new religious center took place in November 1979. According to the project, the Jumeira Mosque is made of modern materials in the classical style of the X-XII centuries. The medieval temples of the Fatimids, an Arab state governing Palestine, Egypt, and Syria, were used as a model.

The mosque, built entirely of white stone, is a large hall with a capacity of up to 1,300 people. The Jumeira Mosque prayer hall, in a traditional hypotensive style, is a large room with rows of columns that support the roof of the building. Opposite the central entrance to the hall is the Kibla Wall, by which Muslims determine the location of the Kaaba.

In accordance with the Islamic canon prohibiting the use of human and animal images as ornaments, the walls of the Jumeira mosque are decorated with complex geometric ornaments with Arabic knitting elements in the men’s hall and flower patterns in the women’s hall.

In the dark, the outer walls of the temple are lit by night, which highlights its elegant outline.

Working Arrangements and Rules for Visits

The Jumeira Mosque is open to non-Muslims six days a week from Saturday to Thursday from 10:00. You don’t need to book, but you want to get to the front entrance around 9:30 in the morning.

During religious holidays, as well as the month of Ramadan, excursions may be restricted.

The Sheikh Mohammed Center for Cultural Understanding provides guided tours of the mosque. Each tour lasts about 75 minutes, the story is in English. Tickets in 2021 cost 35 dirhams. The ticket includes excursion, water, Arabic coffee, tea, and traditional sweets. Children up to the age of 12 are free of charge, but it should be noted that if a small child makes noise and prevents people from praying, it is better to abstain from visiting.

In addition, the Centre has classes offering Arabic language classes, lectures on the history and religion of the country, and various cultural activities. Here you can order an individual tour of the mosque and its surroundings.

A number of mandatory rules must be observed when visiting the mosque:

If you rent a car, you can get from Dubai International Airport to Jumeira Mosque in about 25 minutes.

The Architecture of Consumption: Shopping Centers as an Exhibition Object - 8.08.21
Оставьте комментарий Cancel reply
Latest Articles
21:58
Is a Credit Card Required in Dubai: In Any Case, You Need a Credit Card On Your Dubai Vacation
20:49
You Have to Tip in Dubai: With a Few Dirham You Can Reach a Lot
21:25
Atlantis The Palm Dubai Lobby: The Atlantis The Palm Dubai Lobby is Very Impressive for Visitors
16:21
JA Oasis Beach Tower: You Have a Great View from the JA Oasis Beach Tower in Dubai
19:47
Aura Sky Pool: The Highest 360-Degree Infinity Pool in the World is Only in Dubai
19:54
10 Highest Hotels in Dubai: In the Emirate of Dubai There are Many Tall Hotels with Great Views
20:27
Sharjah International Airport: Home Airport of Air Arabia
17:36
The Biggest Myths About Dubai: Is It True
14:52
The Ukrainian Charitable organization appeals to the world community to help Ukrainians affected by the war in Ukraine
18:19
Yas Island Rotana: Yas Island in Abu Dhabi
MyDubai.Media » Articles » Jumeirah Mosque: One Of The Symbols Of Dubai And The Most Important Place For Muslims