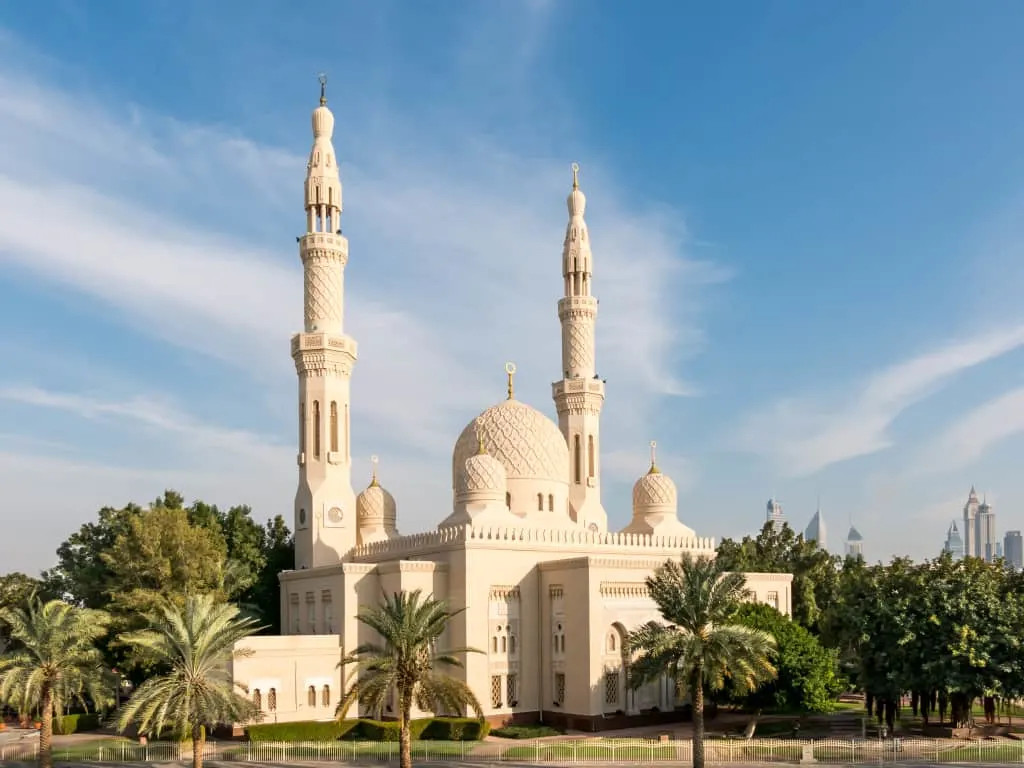 The Jumeirah Mosque is one of the largest and most beautiful in Dubai. The holiday in Dubai is becoming increasingly important and popular. A very trend attraction forms the Jumeirah Mosque. This is due to its enormous attractiveness. And on the other hand, sure that it was the only mosque for a long time in the entire United Arab Emirates, which also provides visitors who are not belonging to the Muslim faith.

The ruling family Maktoum gave the order to build this imposing structure in the 1970s, which was completed in 1978 for the inhabitants of Jumeirah, a district of Dubai. Despite the direct location on the busy Jumeirah Road, the mosque offers an idyllic sight because the building is separated by green areas and enchanting palm trucks.

Many Domes and Minarets

The Jumeirah Mosque impresses from the outside with an impressive appearance. Five large domes shine during the day in the light of the Arab sun and also the two 70 meters high minarets ensure an imposing sight. This sight becomes even more attractive if the entire prayer house is illuminated in the dark of headlamps and put into a fascinating light.

The exterior exists, even if the Jumeirah Mosque is much smaller, that the famous Mohammed Ali Mosque served in Cairo as a role model for this construction. Inside, large columns and arcades dominate.

The greatest couple wearing the appearance of the prayer room and a large chandelier as well as numerous other candlesticks covers the interior into a charming ambiance. This is characterized above all by Egyptian and Turkish influences.

Plenty of Room for Visitors

The described prayer room can accommodate 1,200 guests. A special feature is also the light blue carpet.

The dark blue lines containing them clearly indicate in which direction Mecca with the Kaaba is the highest Islamic sanctuary. Typical of the Muslim faith or the corresponding Arab regulations is a prayer room on the left side in the Jumeirah Mosque. The so-called Ladies Prayer Room is a separate room for the women who are not allowed to pray with men in the large interior. The importance of Mecca, the Kaaba, the spaces separate for the various sexes to pray, and much other information that is important for understanding the Muslim faith.

READ: 10 Highest Hotels in Dubai: In the Emirate of Dubai There are Many Tall Hotels with Great Views

And the charming mosques can be reached in the context of very interesting guided tours in the Jumeirah Mosque. Who makes a holiday in Dubai will see very quickly that there are many mosques here. For Europeans, this is certainly new territory and thus very interesting what it gives in Arab countries to see everything. The biggest and most beautiful mosque in Dubai is Jumeirah Mosque. This is located directly on Jumeirah Beach Road. The building is very impressive and impressive at the same time. In the evening, the Jumeirah mosque is exposed by several radiators and the mosque appears in an impressive tender yellow light. Especially at dusk, you can make great photos.

READ:Relax and Forget about Everything: Wellness, Beauty & Fitness in New York

Surely you want to look at the mosque not only from the outside but also once from the inside. This is possible at specified times. It is best to ask at the hotel reception, which is interested in a guided tour of the Jumeirah Mosque and the staff will then make an appointment. If you live in a hotel in Jumeirah then you will be born from limousine service. Tourists should pay attention to appropriate clothing. Women should keep their hair covered when they enter the Jumeirah Mosque. The staff of the mosque but make the tourists aware of what you should wear. The Jumeirah Mosque was built in 1975 and has been considered the most beautiful mosque in Emirate Dubai.

Post Views: 72
Related posts:
If you have found a spelling error, please, notify us by selecting that text and pressing Ctrl+Enter.

The Architecture of Consumption: Shopping Centers as an Exhibition Object - 8.08.21
Оставьте комментарий Cancel reply
Latest Articles
09:28
Everything You Need to Know About the Forex Traders Summit 2023
16:42
Abu Dhabi Mall: The Mall in the Center of Abu Dhabi
21:58
Is a Credit Card Required in Dubai: In Any Case, You Need a Credit Card On Your Dubai Vacation
20:49
You Have to Tip in Dubai: With a Few Dirham You Can Reach a Lot
21:25
Atlantis The Palm Dubai Lobby: The Atlantis The Palm Dubai Lobby is Very Impressive for Visitors
16:21
JA Oasis Beach Tower: You Have a Great View from the JA Oasis Beach Tower in Dubai
19:47
Aura Sky Pool: The Highest 360-Degree Infinity Pool in the World is Only in Dubai
19:54
10 Highest Hotels in Dubai: In the Emirate of Dubai There are Many Tall Hotels with Great Views
20:27
Sharjah International Airport: Home Airport of Air Arabia
17:36
The Biggest Myths About Dubai: Is It True
MyDubai.Media » Articles » Jumeirah Mosque: Guided Tours in the Jumeirah Mosque are Possible for Tourists