Interesting Facts: Everything You Need to Know About the Palm Islands of Dubai 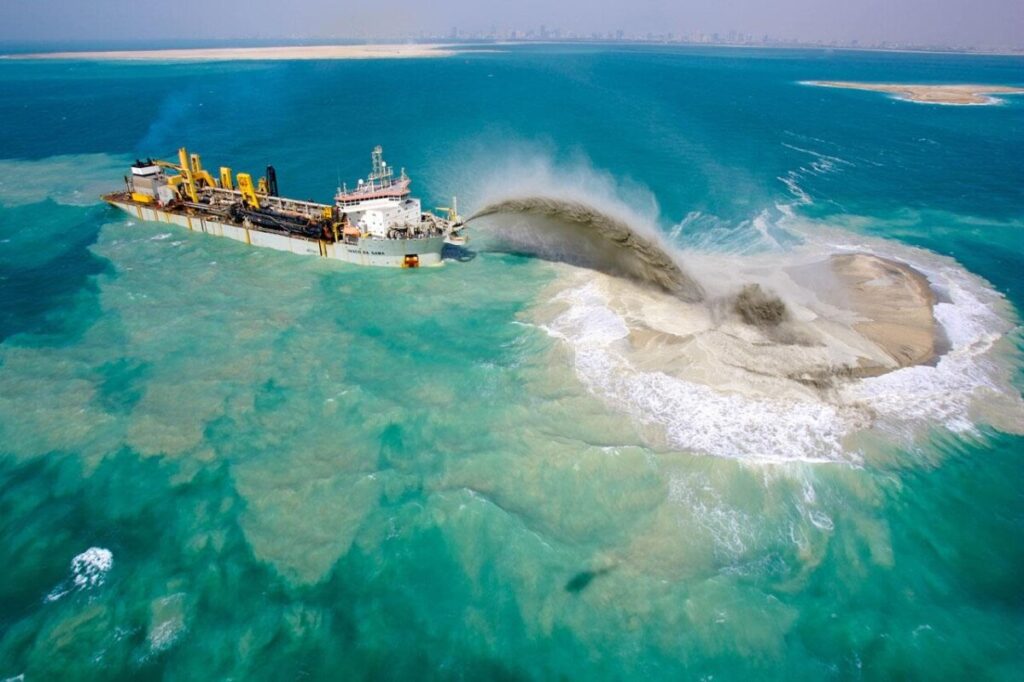 As the largest city, an important trade, financial, and tourist center of the United Arab Emirates, Dubai is constantly growing and developing, surprising its guests with new achievements and fantastic plans. Among the large list of famous sights of the city, one of the places of honor is occupied by the famous Palm Islands.

The Palm Islands have become the largest construction project in Dubai, which is striking in its scale and uniqueness. The Palms Islands cost Al Nakheel Properties $ 7 billion. The grandeur of the project is also evidenced by the fact that the Palm Islands became the second-largest man-made structure in the history of the Earth, which is visible from space.

The whole world in miniature

The name was given to the archipelago for a reason: each island really resembles palm trees of different sizes and shapes. When viewed from the air, such beauty seems incredible. The shape of the artificial islands was not chosen by chance, since it is the date palm that is very revered in Islam, as a tree that gives not just fruits, but a “second bread”.

An ambitious desire to compete with nature itself had a completely pragmatic approach: the desire to increase the coastline by 520 km and create magnificent beaches. Thus, the authorities wanted not only to increase the influx of tourists into the country, but also to give a new impetus to the construction market, and at the same time to attract foreign capital. Everything turned out as well as possible and three new palm trees were supposed to appear in the waters of the Persian Gulf:

The construction of the Palm Jumeirah was crowned with a crescent moon and stretched about 5 km into the Persian Gulf. The other two islands were threatened by the 2008 financial crisis. At the moment, all three islands are fully built up and delight the eyes of vacationers.

How the Palm Islands were built

Unlike other large-scale structures, the foundations of the islands in the UAE are made from millions of tons of blasted rock from the nearby Hajar Mountains, not concrete slabs. Also, hundreds of millions of cubic tons of sand were dredged from the seabed and used to form the upper parts of the future artificial archipelago. It is estimated that the amount of sand used to plan the islands could be used to build a 2-meter wide wall that could surround the globe three times!

Palm Jumeirah is protected from the devastating water element by an 11-kilometer breakwater that surrounds the island in the shape of a crescent moon, and also protects from the seasonal “shamal” winds sweeping through the Persian Gulf from Iraq. The geotextile membrane, which prevents sand washing out, is topped with a layer of a ton of stones and two more layers of stones weighing up to 6 tons each. On each side of the crescent, a 100 m wide hole has been added so that water can circulate.

The shape of each island was determined using high-tech GPS systems attached to dredgers. Besides, vibration compaction technology was applied to land planning. The construction of the Palm Jumeirah cost the government $ 12 billion. Today, on each of the 17 branches of the island, there are 1,500 beach mansions and another 6,000 apartments on the “trunk”.

This island was the first stage of a large-scale project. In 2001, the first cubic meters of sand began to be delivered and in 5 years the construction was finished. In total, it took 7 million cubic meters of sand and 14 billion dollars to create an island in the middle of the Persian Gulf with an area of ​​25 square kilometers.

The island is home to shopping centers, restaurants, shops, and other infrastructure facilities. The creators thought of everything to the smallest detail: the island is connected to the land by a bridge, the length of which is 300 m. You can get to the crescent from Jumeirah using an underwater tunnel. The creators also plan to use airships and a monorail for the transfer of tourists.

A year after the Jumeirah project was launched, construction of the Jebel Ali palm tree began. The construction of the island was completed by 2007 and immediately began building it up with hotels, villas, restaurants, and other infrastructure facilities.

The creators thought that Polynesian-style bungalows would look great here. Besides, it was decided to build 2,000 villas and a complex of multi-story buildings here. If the Palm Jumeirah becomes a place of permanent or temporary residence of wealthy people and their full ownership of the real estate, then Jebel Ali is planned to be used as a tourist attraction: housing will be rented out to travelers.

It is for the tourists that the management wants to build a stunning attraction: the Sea Village. Visitors will be able not only to get acquainted with the life of the inhabitants of the underwater world but also to watch the show of dolphins and killer whales.

The construction of this island at a depth of 5 to 22 m began in 2004. It was planned to be even more grandiose and long-term than Jebel Ali and Jumeirah. It is hard to imagine, but Deira is almost 9 km wide and 112 km square. This island is a huge palm tree with a massive trunk and crown, consisting of 41 branches, which are located at a distance of 400-850 m from each other. Around the island there is a crescent moon, which entered the Guinness Book of Records as the largest in the world – its length is 21 km.

The object really boggles the imagination: it should become a residence for 1 million people. So far, construction work is proceeding rather slowly, since it requires large financial costs.

7 facts about the Palm Islands of Dubai

The main reason for building the artificial island archipelago was to expand Dubai’s tourism market by providing a one-of-a-kind travel destination. Each of the islands was planned to be filled with world-class hotels, high-end services, amenities, and many kilometers of private beaches for vacationers and locals. There are 7 interesting facts about these unusual islands:

Another reason for the construction of the islands was to provide first-class real estate for private individuals. Besides, the islands are home to exclusive residential villas and apartments, marinas, water parks, restaurants, shopping malls, sports facilities, and health resorts that are profitable to the state.

Post Views: 597
Related posts:
If you have found a spelling error, please, notify us by selecting that text and pressing Ctrl+Enter.

The Architecture of Consumption: Shopping Centers as an Exhibition Object - 8.08.21
Оставьте комментарий Cancel reply
Latest Articles
21:38
9 Facts about Emirates Airlines: Here You Can See Some Facts about Emirates Airline
21:39
Rixo’s The Palm Dubai: A Beautiful Beach Hotel in Dubai is the Rixos The Palm Dubai
19:34
More About Transport: The Tram in Dubai
21:05
Dubai Water Bus: The Dubai Water Bus is a Great Way to Explore the Marina and the Dubai Creek
16:30
Which Airport in Dubai: Where You Can Land
19:54
How Does a Doctor Visit in Dubai: You Do Not Have To Be Afraid
22:58
Air Arabia: Airline from Sharjah
19:25
Where the Sands: 10 Good Reasons Why You Absolutely Have to Go to Dubai
21:57
Safety in Dubai: Dubai is Considered One of the Safest Countries in the World
09:28
Everything You Need to Know About the Forex Traders Summit 2023
MyDubai.Media » Articles » Interesting Facts: Everything You Need to Know About the Palm Islands of Dubai