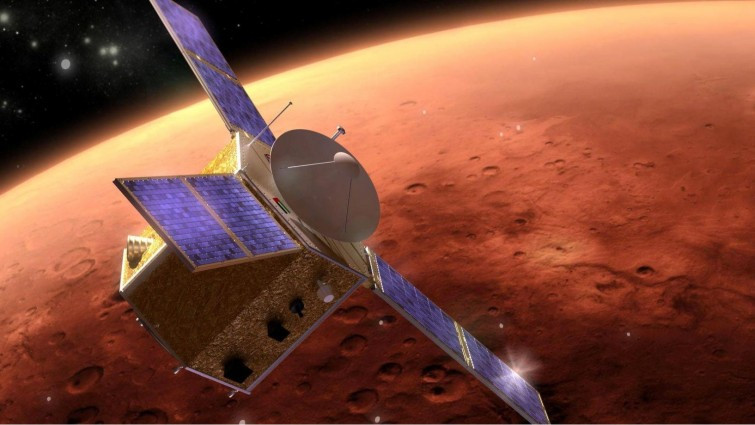 In July 2020, the Mars probe Hope launched towards the Red Planet. Now it should swing into its orbit. Those involved look to the maneuver with anticipation and concern. Because that’s anything but easy, especially not for a space novice like the United Arab Emirates.

READ: The United Emirates Want to Go to the Red Planet

On July 19, 2020, Hope was launched from the Japanese spaceport Tanegashima, the first Mars probe in the United Arab Emirates. “The launcher job was done after the first hour,” says Sharaf. “By then the probe had successfully separated from the rocket. Since then she has been dependent on her own drive. We are now using these engines again after the seven-month journey to enter a Mars orbit. They will burn continuously for 27 minutes to slow down the probe.”

The Probe Has to Do it on its Own

During this maneuver, the speed of the probe should be reduced from more than 120,000 kilometers per hour to less than 20,000. That would be enough for the planet to gain the upper hand and force Hope into orbit. Otherwise, the probe would fly past Mars and disappear into space, never to be seen again. Hope has to do this on her own. Nobody in Dubai is going to push a button. Because a radio signal from Earth to Mars takes longer than ten minutes. So nobody can step in and control the probe remotely.

Sarah Al Amiri explains: “We will then have no direct contact with the probe. Only after ten minutes can we receive a signal from Hope that will tell us what happened. It is true that we used the six onboard engines for short corrective maneuvers a few times during the journey to Mars. But they have never burned non-stop for 27 minutes. During this time we will burn half of our fuel.”

Hope should start breaking about two and a half thousand kilometers above the surface of Mars. When it is done, it will orbit the planet in an elliptical, makeshift orbit.

“We will stay in this orbit for about two months,” says Omran Sharaf. “That depends on how long it takes to check all the instruments. After that, our probe will enter its final, scientific orbit. It is also elliptical and varies between 20,000 and 40,000 kilometers from Mars. Once Hope has reached this orbit, she can begin investigating the atmosphere from near and far. We want to publish the first data in September. They will be accessible to everyone.”

But that is still a long way off at the moment. It remains to be seen whether Hope can fulfill the hopes of the space novice in the Persian Gulf. Sharaf: “Let’s be honest: 50 percent of all missions that went to Mars in the past have failed. It is anything but easy to send a probe into orbit around Mars.”

And that explains the mixed mood of the engineers and scientists at the Mohammed Bin Rashid Space Center in Dubai on the eve of the finish on Mars: “It will be a day full of challenges. That’s why I’m worried too. Tomorrow we will enter the most critical phase of this project.”

On a Flying Visit to the Mars Moon Deimos

Because life on earth depends on the nature of the atmosphere. The same goes for Mars. Perhaps billions of years ago its atmosphere was denser than it is today. Salem Al Marri, Deputy Director of Science and Technology at the Mohammed Bin Rashid Space Center, believes it could have made liquid water on the surface and possibly life in it.

“The atmosphere on Mars is so interesting because it’s so thin. We want to know whether it was once life-friendly, but why it is so thinned out today and contains almost no oxygen at all. People couldn’t survive there.”

To ensure accurate long-term observations, Hope should approach the planet to a distance of 20,000 kilometers, but at its furthest point, it should move more than twice as far away from it. This strongly elliptical orbit should allow almost the whole picture for a Mars year. That corresponds to three earth years. The orbit is even outside of the outer Martian moon Deimos. Hope is supposed to research it on the side.

Post Views: 52
Related posts:
If you have found a spelling error, please, notify us by selecting that text and pressing Ctrl+Enter.

The Architecture of Consumption: Shopping Centers as an Exhibition Object - 8.08.21
Оставьте комментарий Cancel reply
Latest Articles
09:28
Everything You Need to Know About the Forex Traders Summit 2023
16:42
Abu Dhabi Mall: The Mall in the Center of Abu Dhabi
21:58
Is a Credit Card Required in Dubai: In Any Case, You Need a Credit Card On Your Dubai Vacation
20:49
You Have to Tip in Dubai: With a Few Dirham You Can Reach a Lot
21:25
Atlantis The Palm Dubai Lobby: The Atlantis The Palm Dubai Lobby is Very Impressive for Visitors
16:21
JA Oasis Beach Tower: You Have a Great View from the JA Oasis Beach Tower in Dubai
19:47
Aura Sky Pool: The Highest 360-Degree Infinity Pool in the World is Only in Dubai
19:54
10 Highest Hotels in Dubai: In the Emirate of Dubai There are Many Tall Hotels with Great Views
20:27
Sharjah International Airport: Home Airport of Air Arabia
17:36
The Biggest Myths About Dubai: Is It True
MyDubai.Media » Articles » Hope Reaches Mars: United Arab Emirates Spacecraft