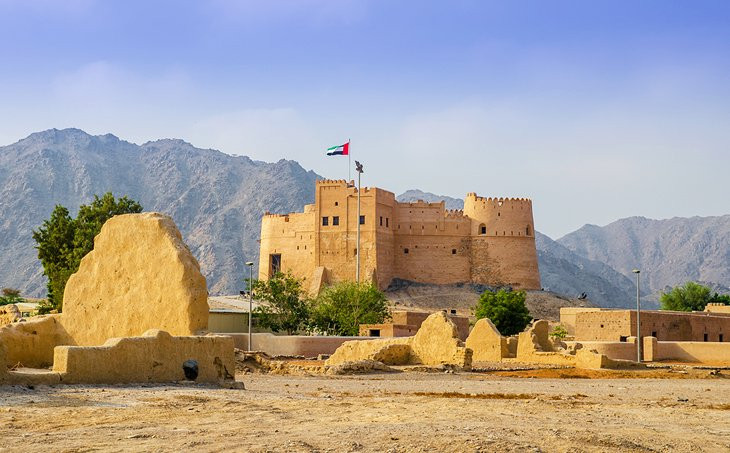 Fujairah is a small Arab principality in the east of the Arabian Peninsula, one of the seven emirates of the British protectorate of Treaty Oman.

The place, on the border of Sharjah and Fujairah, is called «suk al-jumaa» – «Friday bazaar». As in all Muslim countries, Friday in the UAE is a holiday. Friday traffic on the highway is particularly intense: people go to visit friends and relatives, relax on the beaches of Fujairah, or do shopping in Dubai.

The Emirates’ own industry is still underdeveloped, but oil does not pose a problem. Per capita, national income – one of the highest in the world – exceeds $17,000 a year. And so a variety of products are flowing into the UAE literally from all over the world. First of all, from relatively close states in Asia: Japan, China, India.

The Emirate of Fujairah is very small. Its area is only 1,630 square kilometers. The largest of the three dozen settlements in the capital, which is also called Fujairah. It has about 100,000 inhabitants and a quarter of a million in the emirate.

Since there is no oil here, the profits are small. Thus, while in the largest and richest Emirate, Abu Dhabi, per capita national income exceeds $20,000 per year, in Fujairah it is ten times lower. So if a small principality lived on its own, it would not be far from the time when the sale of stamps was almost the main source of income. But in the United Arab Emirates, it is accepted that each emirate contributes half of its earnings to the federal budget, and that money is distributed more or less evenly among all the federal entities, depending on the size of their population and the needs of the highest priority.

The airport accepts not only civilians but also military aircraft. Here, in Fujairah, American military aircraft landed from a huge United States air force base on the island of Diego Garcia in the Indian Ocean. From here, strategic bombers were sent to bomb Iraqi positions in occupied Kuwait.

Ocean ships are like courier trains. If they went to every port where part of their cargo was destined, they would reach their destination for months. A vessel sailing from, say, Japan to Europe stops at only four or five major ports. There it is refueled with fuel, food, water, a part of the cargo, which is then transported by small vessels through smaller ports. Such a shipping system has become particularly convenient and advantageous with the advent of containers.

Fujairah is one of such nodes «sea stations». Its port is located at the entrance to the Persian Gulf, which is very convenient. According to Alistair Arthur, the commercial director of the port, more than three-quarters of the cargo is in transit. One day, the port processed 700,000 containers, making it the second-largest in the region after Dubai. It sold 6 million tons of fuel. The commercial director is pleased. Cargo turnover of the port is steadily increasing by 10-15 percent per year.

The port of Fujairah rose sharply in the mid-1980s, during the Iran-Iraq War. At that time, Iranian warships pirated in the Persian Gulf, occasionally attacking merchant ships. They went either to Iraq or to the other Arab States of the Persian Gulf that supported it to varying degrees.

It became unsafe to swim in the Gulf, with insurance rates soaring. So many ships preferred not to go into the Gulf, but to unload at Fujairah. From here, on the newly built highway, the cargo was transported throughout the region.

Since the end of the Iran-Iraq war in 1988, the port’s cargo turnover and, with it, the Emirate’s revenues have declined markedly. You had to invent something new – and you invented it. Next to the port, you created a «free zone».

The director of the «free zone» Sherif al-Awad explained in detail what this is. In the territory of the zone, 100% foreign property is allowed. There are no customs duties on imported materials, equipment, and goods. Companies are tax-exempt and are free to repatriate their capital and profits.

«Free Zone» Fujairah is not the only one in the Emirates. The same zone was created in Jebel Ali, near Dubai. Philosophy and order are the same, but the scale is much larger.

The port in Jebel Ali, without which the «free zone» is unthinkable, is considered the largest artificial port in the world. So much soil had to be moved to dig up the cove that, if a wall were built out of it about a meter wide and three meters high, the wall could encircle the entire globe at the equator. Under the scale of the port and the size of the «free zone». Its area – 100 square kilometers. There are already represented more than 750 companies.

The Architecture of Consumption: Shopping Centers as an Exhibition Object - 8.08.21
Оставьте комментарий Cancel reply
Latest Articles
21:58
Is a Credit Card Required in Dubai: In Any Case, You Need a Credit Card On Your Dubai Vacation
20:49
You Have to Tip in Dubai: With a Few Dirham You Can Reach a Lot
21:25
Atlantis The Palm Dubai Lobby: The Atlantis The Palm Dubai Lobby is Very Impressive for Visitors
16:21
JA Oasis Beach Tower: You Have a Great View from the JA Oasis Beach Tower in Dubai
19:47
Aura Sky Pool: The Highest 360-Degree Infinity Pool in the World is Only in Dubai
19:54
10 Highest Hotels in Dubai: In the Emirate of Dubai There are Many Tall Hotels with Great Views
20:27
Sharjah International Airport: Home Airport of Air Arabia
17:36
The Biggest Myths About Dubai: Is It True
14:52
The Ukrainian Charitable organization appeals to the world community to help Ukrainians affected by the war in Ukraine
18:19
Yas Island Rotana: Yas Island in Abu Dhabi
MyDubai.Media » Articles » Fujairah Stamps: Traveling the Persian Gulf