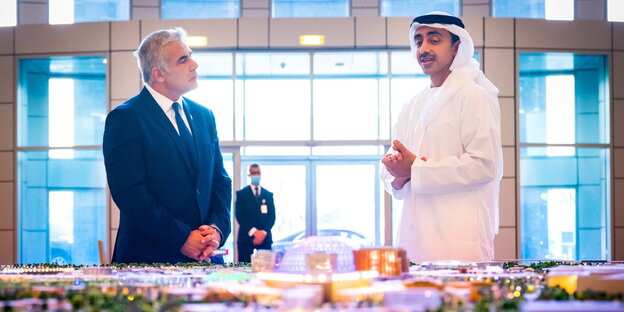 Israel’s Foreign Minister has officially visited the Emirates for the first time. While normalization is proceeding, it is stalling in other Abrahamic states.

Jair Lapid visited the United Arab Emirates. He opened an embassy in Abu Dhabi and a consulate in Dubai. It was the first official visit by an Israeli foreign minister to the Gulf state.

On this historic occasion, Lapid even tweeted in Arabic: “We are making history.” “Proud to represent the State of Israel in the United Arab Emirates. Thank you for the warm welcome. ”He visited the Israeli pavilion on the grounds of the World Expo in Dubai, which is due to open in October.

Israel’s new government is now reaping the fruits of what the Netanyahu / Trump duo has planted. Last year, following US mediation, the Emirates and Israel announced a normalization of their relations. It happened in a pompous production in the White House. Bahrain, Morocco, and Sudan also recognized the Jewish state and announced that they would establish relations with Israel.

READ: The 10 Most Common New York Beginners Mistakes: How To Spot Them and Avoid Them

In the case of the Emirates, normalization is the furthest step: there are no direct flights between the countries. Israeli pop stars have visited the Emirates and more than 200,000 Israeli vacationers have already traveled to the Gulf.

Several trades and cooperation agreements have been signed and the Emirates. They announced the creation of a US $ 10 billion investment fund. The money must flow into sectors such as energy, water, space, healthcare, and agricultural technology.

The fact that Lapid and not Israel’s new Prime Minister Naftali Bennett made the inaugural visit to the Gulf should not be a coincidence: Hardliner Bennett supports Israeli settlement policy in the Palestinian West Bank without any ifs or buts.

Years ago, he rejected a two-state solution with the Palestinians. A visit by Bennett would have met with sharp criticism in the Emirates, as in other Arab countries.

With their new Israel policy, the Emirates had moved away from the line of Arab states not to recognize Israel until the Middle East conflict was resolved. In return, Israel announced last year that it would suspend the planned annexation of parts of the occupied West Bank.

READ: In One Minute on the 124th Floor: 11 Years of Burj Khalifa

The rapprochement between Israel and the other three Arab states that have signed the so-called Abraham Agreement is less far than in the case of the Emirates. It is true that the King of Bahrain officially appointed Khaled Yousef al-Jalahmah as the first Bahraini representative in Israel. However, there is still no embassy in Tel Aviv.

In the case of Morocco, the Trump administration had engineered a controversial deal and, in return for Morocco’s recognition of Israel, recognized Moroccan sovereignty over Western Sahara.

In doing so, the USA made a turnaround that received little international attention by recognizing the claim of an occupying power to a formerly colonized area. The Biden administration has not reversed this step so far, although experts believe that this would be entirely possible.

Israel has reopened a liaison office in Morocco’s capital Rabat. Full-fledged messages are planned for a later date. However, there is resistance from politics and the population to normalization. The moderate Islamist JDP, part of the Moroccan government coalition, called for the Israeli liaison office to be closed again during the Gaza war in May.

In Sudan, the last land of Abraham, the normalization process is only making slow progress. A first step: the country’s leadership decided to repeal a law that forbids diplomatic relations with Israel and business relations with Israel, as well as the importation of Israeli products.

However, the rapprochement within the leadership in Khartoum is controversial. A civil-military interim leadership rules Sudan nowadays. While the military wants to develop relations with Israel, there are reservations on the civilian side. Foreign Minister Mariam al-Mahdi, for example, was against the abolition of the boycott law. At the same time, there is resentment that Israel’s security organs are cooperating primarily with the military in Sudan.

Post Views: 13
Related posts:
If you have found a spelling error, please, notify us by selecting that text and pressing Ctrl+Enter.

The Architecture of Consumption: Shopping Centers as an Exhibition Object - 8.08.21
Оставьте комментарий Cancel reply
Latest Articles
09:28
Everything You Need to Know About the Forex Traders Summit 2023
16:42
Abu Dhabi Mall: The Mall in the Center of Abu Dhabi
21:58
Is a Credit Card Required in Dubai: In Any Case, You Need a Credit Card On Your Dubai Vacation
20:49
You Have to Tip in Dubai: With a Few Dirham You Can Reach a Lot
21:25
Atlantis The Palm Dubai Lobby: The Atlantis The Palm Dubai Lobby is Very Impressive for Visitors
16:21
JA Oasis Beach Tower: You Have a Great View from the JA Oasis Beach Tower in Dubai
19:47
Aura Sky Pool: The Highest 360-Degree Infinity Pool in the World is Only in Dubai
19:54
10 Highest Hotels in Dubai: In the Emirate of Dubai There are Many Tall Hotels with Great Views
20:27
Sharjah International Airport: Home Airport of Air Arabia
17:36
The Biggest Myths About Dubai: Is It True
MyDubai.Media » Articles » From Jerusalem to Abu Dhabi: Jair Lapid Visits Emirates