Flora and Fauna of the UAE: a Difficult Life in the Desert 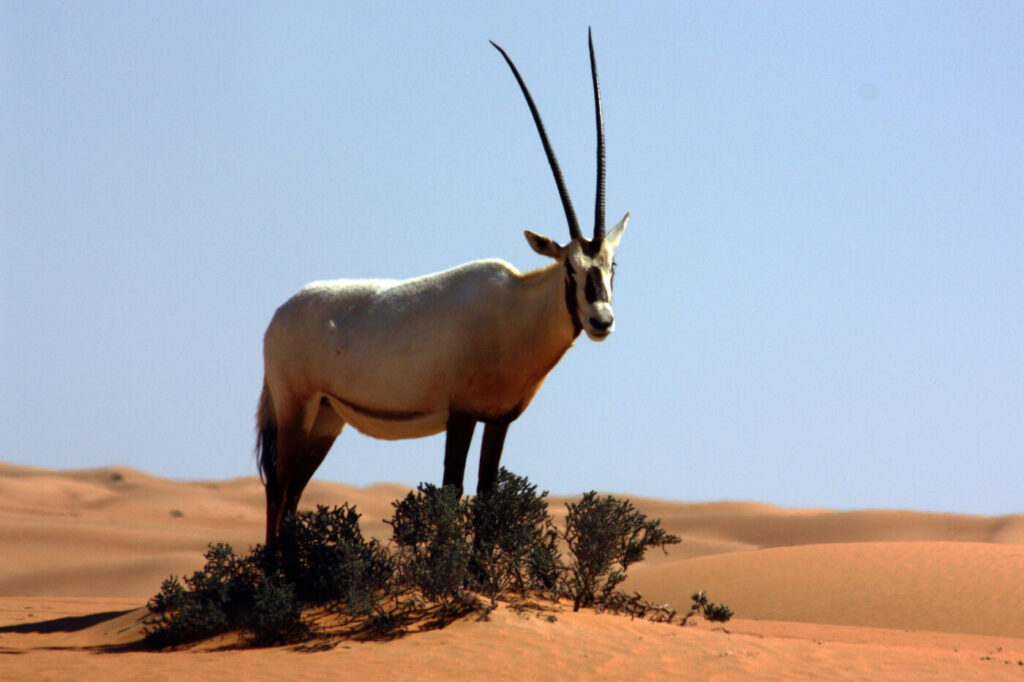 The United Arab Emirates occupies the largest and almost lifeless desert in the world. However, even in such a small area of the country, the different landscapes of the Middle East region and the diversity of wildlife are harmoniously combined.

The main problem for local plants is total water scarcity. Therefore, the vegetation consists mainly of dry grasses, lichens, and shrubs that came from Africa several millennia ago. In the process of evolution, plants adapted as best they could to the climate here. Some of them have the same cycle of rainy days that sometimes occur in the UAE. During this time the plant grows, blooms prepare its seeds, and disperse them until the next rainy season. This is a true desire for life, worthy of respect and admiration!

In the mountainous area, only the unfriendly Tamarisk and acacia grow. The rest of the flora are mangoes, oranges, mandarins, bananas, lemons, dates, coconuts, grapes, tobacco, and cereals, requiring more tolerable conditions and growing exclusively in oases.

After oil and gas production began to drive the country furiously forward, the government took care of greening the territory of the state. A special program has been set up that prepares more and more desert areas for planting and proper maintenance of the green spaces.

Plant irrigation in cities and towns is very intelligent and cost-effective. Each tree has a separate, artificially created, stream that the computer controls. In the «old» oases in the desert, there is an underground water supply consisting of ancient wells and channels laid by sandstone.

As far as the animal world is concerned, it is quite diverse: camels, antelopes, wild goats, hyenas, jackals, hares, gazelles, foxes, snakes, stews, rats. In order to survive in hot conditions, animals also adapt. Some dig holes and remain underground for a long time. Others are able to move quickly under a layer of sand. Some live exclusively at night, waiting for the temperature to drop. Others wait out particularly hot summer months underground in a state of hibernation. That’s why it’s so hard to see many animals.

Birds can be seen with cormorants, gulls, herons, flamingos, geese, and ducks. Many migratory birds are found. UAE are exactly those «warm edges» where birds fly to winter. With the increase of green area, the number of birds living and wintering there is constantly increasing.

Camels – locals of the UAE dunes.

Unfortunately, however, on the verge of extinction, the South Raven leopard remained, with only a few remaining. The same fate may soon be expected of the Arabian wolf and the striped hyena, the mountain and bearded goat species, and the Arabian tara.

Marine life is the most abundant of its fauna. Mackerel, tuna, sardines, barracuda, hamur, crabs, lobsters, shrimp, octopuses, cuttlefish, squid, mussels, and oysters are common. There are also marine turtles and hedges, sharks, jellyfish, rays, sea seals, whales, and dolphins. Fish are harvested almost all year round. So the local cuisine is full of all kinds of seafood dishes. It’s just a gourmet paradise.

Attention, DANGER! It should also be noted that in the deserts of the United Arab Emirates, animal species are found to be dangerous to health and even to human life. Now, on desert tours, there’s a possibility of encountering six kinds of snakes, three of which are poisonous.

The worst way to meet a sandy viper is because of its color, which visually drains it from the sand, the snake becomes very hard to see. In addition, it has a peculiarity of burrowing into the sand, which decreases the probability of being identified in advance. Often bites the person who steps on it.

The carpet viper is slightly less dangerous. It is also poisonous, but has the grace of sizzle, warning of its presence. It’s sandy with white patches in the back.

Most prominent is the long dark rattlesnake, which stands out on the sand in a dark color and leaves zigzag marks on it.

In the case of UAE insects, only spiders of the Black Widow and Scorpion species are considered dangerous. The latter should be feared by color, the lighter the scorpion – the more poisonous it is.

The desert dunes are home to many turtles.

Despite the abundance of predators in the sea, the only jellyfish can be dangerous. Occasionally, they can leave insignificant burns on the skin. It doesn’t happen very often, and it’s only early autumn, September, October. At other times, jellyfish don’t come ashore.

Sea snakes can also cause a lot of trouble. Fortunately, they can only be found in the open ocean, where they are relatively non-aggressive.

On the East Coast, you can encounter rockfish and scorpionfish at the bottom of the reef. But rubber shoes easily protect the skin of the feet during walks and bathing on «wild» beaches of this coast.

Post Views: 1,114
Related posts:
If you have found a spelling error, please, notify us by selecting that text and pressing Ctrl+Enter.

The Architecture of Consumption: Shopping Centers as an Exhibition Object - 8.08.21
Оставьте комментарий Cancel reply
Latest Articles
09:28
Everything You Need to Know About the Forex Traders Summit 2023
16:42
Abu Dhabi Mall: The Mall in the Center of Abu Dhabi
21:58
Is a Credit Card Required in Dubai: In Any Case, You Need a Credit Card On Your Dubai Vacation
20:49
You Have to Tip in Dubai: With a Few Dirham You Can Reach a Lot
21:25
Atlantis The Palm Dubai Lobby: The Atlantis The Palm Dubai Lobby is Very Impressive for Visitors
16:21
JA Oasis Beach Tower: You Have a Great View from the JA Oasis Beach Tower in Dubai
19:47
Aura Sky Pool: The Highest 360-Degree Infinity Pool in the World is Only in Dubai
19:54
10 Highest Hotels in Dubai: In the Emirate of Dubai There are Many Tall Hotels with Great Views
20:27
Sharjah International Airport: Home Airport of Air Arabia
17:36
The Biggest Myths About Dubai: Is It True
MyDubai.Media » News » Flora and Fauna of the UAE: a Difficult Life in the Desert