Emirates Palace: Palace for the People 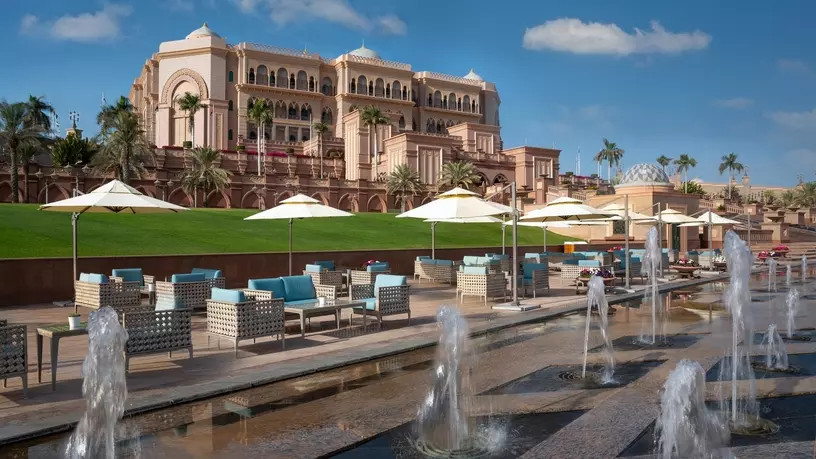 One of the most beautiful hotels in Abu Dhabi. A palace was built for people. A symbol of Arab abundance and hospitality. Emirates Palace today offers far more than one would expect from a holiday in the Emirates – a dip in the comfort of a royal atmosphere, but at a reasonable price.

Yes, it is this fact – reasonable prices – that is often not assumed when it comes to Emirates Palace. He seems to make such a powerful impression of a place for very wealthy people, sheikhs, and world celebrities that it sometimes seems that living here is worth a lot of money.

At the same time, you can book a standard room much cheaper than many beach hotels in Dubai. Your experience will still be royal. It’s not even a classic hotel, it’s a palace that goes far beyond a five-star rating. It was built as a symbol of the generosity of the UAE to its people, and many of the local inhabitants so name it – «our palace».

Emirates Palace is the most expensive hotel ever built, costing more than even Marina Bay Sands (Singapore) and Burj Al Arab (Dubai), with a cost of $3 billion. But despite its impressive size, gardens, and fountains, it is comfortable and comfortable to live here. And even if at first the high palace ceilings and marble halls can embarrass someone with their greatness, even after a day you start to like it and you completely integrate into the atmosphere of the place.

One of the features of the hotel is the interior decoration of the hotel with an incredible amount of gold leaf with the help of ash-making technology.

There’s so much gold in here, even the keys to the rooms are in gold coins. It is interesting that at the hotel there is permanent professional gilding of walls.

Its duties include the renewal of the golden decoration of the hotel ceilings, walls, and domes, and this «golden master», probably unique in its kind. And the most «Instagram» chips of the hotel were also not without gold – it is a specialty cappuccino with gold flakes and ice cream in a waffle horn, the water on top of melted gold.

READ: What to See in Dubai: New Attractions for Your List

The palace itself is decorated with 114 domes – the central one, decorated with pearls and crystals, rises 72.6 meters above the ground. The hotel is lit by over 1,000 chandeliers, the heaviest of which weigh 2.5 tons. During the day, the hotel’s golden interiors contrast with the surrounding green, silver fountains, and bright blue skies. In the evenings the lighting changes discreetly, and on the main dome of the hotel, there appears an «air rainbow» from illumination.

Inside the palace are impressive spaces ranging from a giant atrium to corridors, many of which are as wide as the two-lane autobahn. It can take up to 10 minutes from reception to rooms, and the journey from one wing of the hotel to another is almost 1 kilometer.

Because of this huge space, you will always feel far away from tourists or companies of noisy children if, say, you come here as a couple. Your privacy here is respected at the highest level.

But in fact, this hotel is perfect for families with children. Located in the center of Abu Dhabi, close to the Qasr Al Watan Palace and Corniche Promenade, Emirates Palace has one of the best 1.3 km beaches, a swimming pool with children’s slides, and a river framed with bougainvillea and palm gardens.

The Territory even has its own Majlis, a stylized Bedouin camp with camels that can be ridden on the beach or photographed. The hotel is surrounded by a landscape park with 8,000 trees planted, 100 fountains playing in the sun, a marina, and a 6.4 km track.

The hotel has 394 rooms with traditional Eastern luxury interiors. The rooms have their own wardrobe, beautiful and spacious marble bathrooms with hydro-massage bathrooms and a shower. Each room has an iPad control station. Fresh flowers, a sachet with the aromatic sleeping kit, and cosmetics from Amouage are a pleasant addition to the comfort of the rooms.

Today the hotel belongs to the Mandarin Oriental network. It is indeed a frequent stop for heads of state and politicians, diplomats, businessmen, and VIP personalities, including Sir Elton John, Will Smith, Justin Timberlake, and other celebrities from show business and professional sports.

The hotel has a concert hall, where concerts of both classical and modern music are often held.

The hotel has several popular bars and restaurants, ranging from the favorite of many Martabaan by Hemant Oberoi to the international Asian network Hakkasan. The locals often come here for dinner. In addition, the BBQ Al Qasr restaurant has been operating on the beach overlooking the Gulf since 6 pm and the Cascades Trattoria by the pool. It is worth trying here a brand burger with 24-karat gold: it can be ordered in several restaurants, including Le Café, BBQ Al Qasr, whether asked to bring directly to the room.

READ: Ramadan in the UAE: Rules of Conduct for Tourists

Also quite well known and popular very «Instagram» lounge-cafe on the beach Breeze Lounge, where often go to sit after concerts or business events. It serves hookah, snacks, and drinks, but the most important thing is that it offers a beautiful view of the sea.
In conclusion, real luxury is always in the details. Perhaps simply by visiting Emirates Palace, it is difficult to understand all of the creators’ love invested in the atmosphere of this place. But if you live here just for a day, you will begin to perceive Emirates Palace differently. After a rest in this hotel, you will stop to perceive it only as a cultural attraction of Abu Dhabi, and perhaps, as well as local residents, you will start to call it «my palace».

The Architecture of Consumption: Shopping Centers as an Exhibition Object - 8.08.21
Оставьте комментарий Cancel reply
Latest Articles
21:58
Is a Credit Card Required in Dubai: In Any Case, You Need a Credit Card On Your Dubai Vacation
20:49
You Have to Tip in Dubai: With a Few Dirham You Can Reach a Lot
21:25
Atlantis The Palm Dubai Lobby: The Atlantis The Palm Dubai Lobby is Very Impressive for Visitors
16:21
JA Oasis Beach Tower: You Have a Great View from the JA Oasis Beach Tower in Dubai
19:47
Aura Sky Pool: The Highest 360-Degree Infinity Pool in the World is Only in Dubai
19:54
10 Highest Hotels in Dubai: In the Emirate of Dubai There are Many Tall Hotels with Great Views
20:27
Sharjah International Airport: Home Airport of Air Arabia
17:36
The Biggest Myths About Dubai: Is It True
14:52
The Ukrainian Charitable organization appeals to the world community to help Ukrainians affected by the war in Ukraine
18:19
Yas Island Rotana: Yas Island in Abu Dhabi
MyDubai.Media » Articles » Emirates Palace: Palace for the People