Dubai to have the world’s first Clothespin Tower 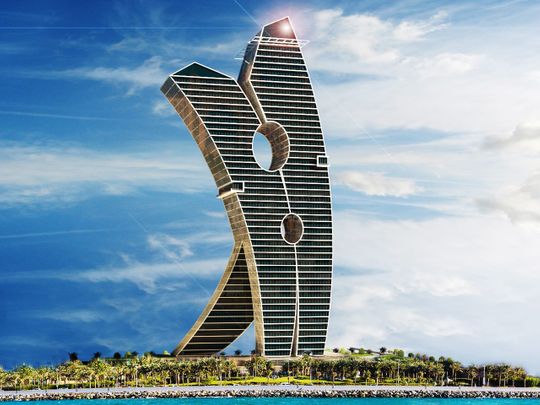 The Clothespin company in Israel plans to bring this innovative artistic concept to Dubai.

The common clothespin takes on a unique dimension in the hands of famous Israeli artist Zygo. Now a leading team of his is planning to create the first Clothespin Tower in Dubai using innovative design and cutting-edge technology to build the 40-floor tower as a symbol of love, peace and hope between the world and the UAE. In an interview with Gulf News, artist Zygo talks about making the tower a life-long addition to the city’s skyline.

Tell us about the Clothespin Tower?

The Clothespin Tower is the first conceptual building of its kind that turns the mundane clothespin into an icon of eternal love and unity. While most buildings and skyscrapers boast of height and architecture but lack truth and philosophy, the Clothespin Tower, based on the famous artwork of Zygo, can be called a “monument of art”. The concept behind the Clothespin tower shows two halves complementing each other, just like the everyday Clothespin.

The tower follows Zygo’s theory that two complementary halves or two souls come together to form a perfect union. The difference between the Clothespin Tower and other towers lies in its aesthetic formality and shape. We believe that no other building shares such a deep philosophical concept of love in the 21st century. The building will have emotional, perceptual and philosophical significance and everyone visiting the tower will feel the emotion.

The Clothespin Company plans to bring the tower to Dubai. What kind of potential do you see?

The artistic and unique concept will create an iconic tower which will be a symbol for love, peace, and hope. This project is going to be the biggest piece of art ever created. We invested lots of efforts in the architectural planning and the way to transform an art piece to a live tower.

We are currently exploring local partners to develop the tower in the Gulf Region. We believe that just like the tower, the shared philosophy of the UAE and Israel has resulted in the recently signed Abraham treaty that holds endless opportunities for us together. The leading team of the Clothespin tower is specialised in creating concepts and implementing them in the field of housing, offices, and hotels. After much deliberation we chose the UAE, thanks to the respect it has globally for its state-of-the-art developments and iconic buildings. We see the project as a bridge to peace. This will be the first art-piece-tower in the world and it will be an anchor point for peace between the countries and a tourist must-see attraction..

The Clothespin Company will transform the famous artwork of Zygo into a realistic project that is both functional and experiential. We want to make people an active part of the project, from being passive viewers of works of art, we give them an option to be a part of the tower — enter it, live in it, spend time inside it and more. We believe this inner experience of the viewer is a powerful one.

Imagine being able to step into the tower and live in it, feel it from the inside and even change it a little with the personal character of each guest. When you look at the Burj Khalifa there is a sense of power that translates into height. In the Clothespin Tower the sense of size is replaced by a feeling of intimacy and love, a sense of self.

What will be the practical use of the Clothespin Tower?

The plan is to build a twin tower as seen in the illustration. One side will serve as a luxury hotel for guests coming to a city with 1,200 decorated rooms. On the other side we will have 300 luxury apartments. The tower will also have 10,000 square meters of commercial space that will include a shopping centre showcasing the top fashion brands, contemporary art galleries, upscale restaurants and more. The mezzanine will become a lounge, fitness centre and luxury spa. The tower will be a centre of attraction for tourists, give the city a touch and strengthen the relations between Israel and the UAE.

When do you plan to begin construction?

We are hoping to begin construction in 2023

Have you found a location?

We haven’t found one yet. The potential of the location will be carefully examined according to the uniqueness of the project.

What are your thoughts about the Dubai Real Estate market?

We believe in the strong fundamentals of Dubai’s real estate market and we believe that the uniqueness of the project will bring a wave of new customers in the market, which in turn will bring in new investment. We are looking forward to visiting Dubai in February.

The Architecture of Consumption: Shopping Centers as an Exhibition Object - 8.08.21
Оставьте комментарий Cancel reply
Latest Articles
21:58
Is a Credit Card Required in Dubai: In Any Case, You Need a Credit Card On Your Dubai Vacation
20:49
You Have to Tip in Dubai: With a Few Dirham You Can Reach a Lot
21:25
Atlantis The Palm Dubai Lobby: The Atlantis The Palm Dubai Lobby is Very Impressive for Visitors
16:21
JA Oasis Beach Tower: You Have a Great View from the JA Oasis Beach Tower in Dubai
19:47
Aura Sky Pool: The Highest 360-Degree Infinity Pool in the World is Only in Dubai
19:54
10 Highest Hotels in Dubai: In the Emirate of Dubai There are Many Tall Hotels with Great Views
20:27
Sharjah International Airport: Home Airport of Air Arabia
17:36
The Biggest Myths About Dubai: Is It True
14:52
The Ukrainian Charitable organization appeals to the world community to help Ukrainians affected by the war in Ukraine
18:19
Yas Island Rotana: Yas Island in Abu Dhabi
MyDubai.Media » Real Estate » Dubai to have the world’s first Clothespin Tower