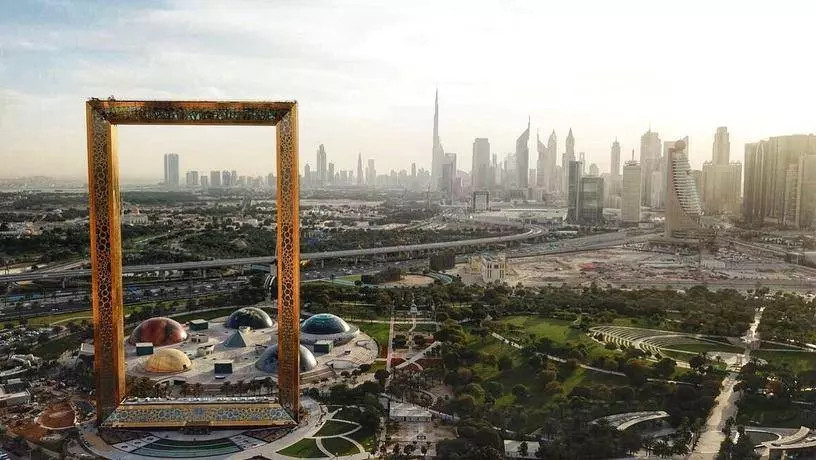 Dubai knows how to surprise tourists. Here everyone can find rest for themselves not only to taste but also in their pocket.

The scale of projects in Dubai is in almost all cases striking. So it is with the Dubai Frame, a new attraction. You can visit it from 9.00 to 21.00. But is it worth it? After all, not all attractions live up to expectations. However, the project of the local municipality is worth the time spent by tourists and the money of the local authorities (spent 25 million AED). The Dubai Frame amazes with its size and beautiful view from the observation deck but also with the idea itself.

Visiting the landmark, a tourist will be able to learn the history of the city’s development. There will be a lot of impressions, also because the museums will use modern technologies (images in 3D format and much more).

But the surprises for the visitors will not end there. Tourists and locals will be able to see the future of Dubai (what it will be in 50 years).

Fortunately, modern technologies allow showing realistic projections. Beautiful, interesting, unusual. If you are vacationing in Dubai, it is worth visiting a new attraction. It will not only amaze with its scale but also help you gain new experience and knowledge.

Dubai Frame is a relatively new attraction in this city, opened on January 1, 2018. The construction is made in the form of a huge photo frame, which is located in Zabil Park.

The cost of the project was more than $ 60 million, and the construction itself was carried out from 2013 to the end of 2017. The structure is made of glass, steel, aluminum, and reinforced concrete. More than 3,000 square meters of laminated glass, about 10,000 cubic meters of cement, more than 2,000 tons of steel. The frame is also known as the Dubai Golden Frame, as its surface is gilded. All in all, the building has 48 floors.

This building design was selected in 2009 from over 900 projects in the ThyssenKrupp Elevator Architecture Award. Designers and architects from all over the world were asked to design the future of Dubai’s new face. The project was won by Fernando Donis, and the designer himself received a cash prize of $ 100,000.

Then Donis said that he perceives Dubai as a city of iconic architectural solutions and a city in which the new is incredibly intertwined with the old. Therefore, its new symbol should have become something that would allow to capture all this splendor, to connect the old and new Dubai. And the colossal photo frame just became such a “symbol”.

The two towers, each of which is 150 meters high, are connected by a 93-meter glass bridge at the top (the principle of the golden ratio was used during the construction). There, at the top, there is an observation deck, which offers incredible views of the city, on the one hand – on its new part, and on the other – on the old one, the way Dubai was many, many years ago.

The top can be reached using the panoramic lift. The ascent time to the very top is 75 seconds.

From the observation deck, you can see the Burj Khalifa skyscraper, and most of the high-rise buildings along the famous Sheikh Zayed Street, and the historical, old parts of the city (for example, colorful Deira). Another unforgettable impression, judging by the reviews posted on the web, is a walk along the transparent glass bridge. It’s scary and exciting at the same time; the impression is that a person is walking through the air. If you get hungry, there is also a small cafe upstairs.

However, the Dubai Frame is not only about walking outside. There are also interior rooms here. Tourists will find it interesting to visit the interactive museum located in the Frame, which tells about the history of Dubai, the city uses modern technologies and advanced solutions.

There is also a small exhibition dedicated to the Dubai Frame itself. After descending from the panoramic platform, tourists enter a room where a small visual show is shown, which tells about the supposed future of Dubai. Then you can buy souvenirs in the shop here.

The Guardian has named the Dubai Frame “the largest photo frame in the world”.

And the frame is notoriously known as “the largest stolen building of all time.” The fact is that, according to designer Fernando Donis, the Dubai authorities appropriated his work without paying him a penny. The related trials are still ongoing. Donis claims that after he won the competition, no one ever signed a contract with him or paid for the fact that his design was used in the construction.

There is a charge to visit the Dubai Framework. Adults will have to pay 50 dirhams to enter. For children, the ticket is cheaper, only 20 dirhams. Children under three years old can enter free of charge. Free admission is also provided for disabled people and retirees. Tickets can be purchased online in advance on the official Dubai Framework website.

By the way, you won’t be allowed upstairs with big bags. You can leave your belongings in the storage room downstairs. Smoking is prohibited while visiting the interior and observation deck.

The Architecture of Consumption: Shopping Centers as an Exhibition Object - 8.08.21
Оставьте комментарий Cancel reply
Latest Articles
21:58
Is a Credit Card Required in Dubai: In Any Case, You Need a Credit Card On Your Dubai Vacation
20:49
You Have to Tip in Dubai: With a Few Dirham You Can Reach a Lot
21:25
Atlantis The Palm Dubai Lobby: The Atlantis The Palm Dubai Lobby is Very Impressive for Visitors
16:21
JA Oasis Beach Tower: You Have a Great View from the JA Oasis Beach Tower in Dubai
19:47
Aura Sky Pool: The Highest 360-Degree Infinity Pool in the World is Only in Dubai
19:54
10 Highest Hotels in Dubai: In the Emirate of Dubai There are Many Tall Hotels with Great Views
20:27
Sharjah International Airport: Home Airport of Air Arabia
17:36
The Biggest Myths About Dubai: Is It True
14:52
The Ukrainian Charitable organization appeals to the world community to help Ukrainians affected by the war in Ukraine
18:19
Yas Island Rotana: Yas Island in Abu Dhabi
MyDubai.Media » Articles » Dubai Frame: Impressive and Giant