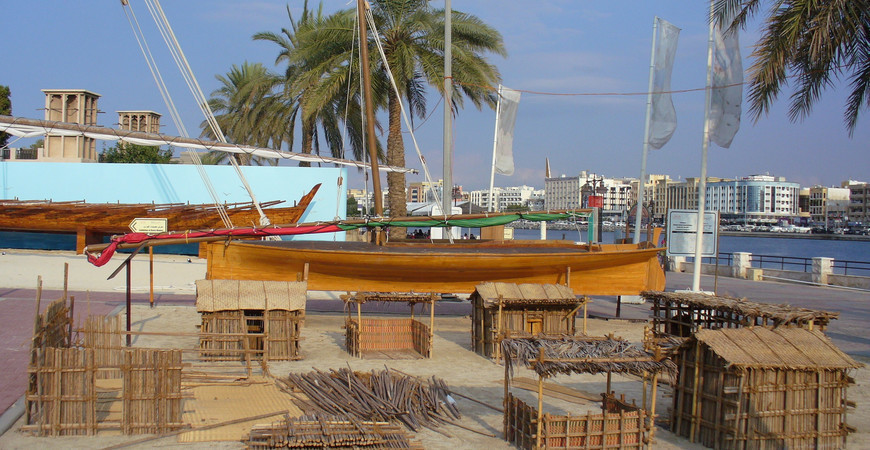 The ethnographic village was built in 1997 in the historical district of Shindag as part of the folklore program of the Trade Festival. A visit to the Diving Village is a kind of time machine that allows you to see firsthand the striking contrast between modern Dubai and what it was just half a century ago. In the 1960s, oil was found on the coast of the Persian Gulf, and the era of hydrocarbons began for the emirates, turning the UAE into a rich and prosperous country. Oil revenues have created a fantastic desert paradise.

READ: Bahur and Ud: Enchanting Fragrances of the East

A visit to the village takes you back to the recent past when on the site of a modern metropolis with skyscrapers and futuristic buildings there were huts made of reeds, stones, and palm branches, and the locals earned their living by catching pearls and fishing. It is hard to believe now that in 1883 when Dubai was founded, the village had a population of only 800.

Prior to the discovery of oil fields, pearls were the main wealth of the Persian Gulf and the main source of income for the inhabitants of the coast. Dubai was called the “Pearl Coast” and the pearl trade accounted for 95% of all treasury receipts.

The temperature and chemical composition of the water in the water area is favorable for the habitation of bivalve mollusks of the genus Pinctada, in the valves of which pearls of rare colors are formed: pink, green, blue, purple, anthracite, and many other shades. The development of the fishery was also facilitated by the fact that the places rich in pearl shells are located at a relatively shallow depth of 5 to 25 meters.

READ: Henna: From Ancient History to the Present Day

The diving profession was inherited, boys were taught from childhood to hold their breath and dive into the water with a lead attached. Pearl divers rarely lived to old age, because constant oxygen starvation and pressure drops due to frequent diving affected health, leading to blindness and deafness. Saltwater corroded eyes and skin, and in the depths, sharks, moray eels, and sea snakes lay in wait. However, the pearl seekers were not stopped by the danger, because there were no other ways to feed the family.

Almost the entire male population of the coast was hunting for mollusks. The pearl hunting season lasted from May to August, during these months hundreds of rowboats and sailing ships went out to sea. Only in one of the dozens or even hundreds of shells raised from the bottom was it possible to find a valuable mother-of-pearl find. The equipment of the pearl divers was simple: the nose was clamped with a wooden clothespin, a mesh basket was attached to the chest for collecting shells, and a stone was held in his hand with a tied cable.

Traditional pearl fishing in the Arabian Peninsula began to decline in the 1920s, when the technology of artificial pearl cultivation was invented in Japan, which made the extraction of natural gemstones unprofitable. Shellfish farms have also appeared in the Middle East.

Nowadays, pearl fishing in the Persian Gulf has come to naught, becoming a hobby, but Dubai cherishes the memory of the past. Dubai Diving Village is a reminder of how previous generations of the country made a living, and the waterfall with pearl divers has become the hallmark of Dubai Mall.

Anchors are installed on either side of the entrance gate, and one of the symbols of the UAE, a wooden dhow sailing ship, rises above the arch. The centerpiece of the exhibition is the djalbut boat, which was used for pearl mining.

The collection also includes: the universal boat samaa; small boat for baggara fishing; reed boat shasha, which will not sink, even if filled with water to the sides; the battal vessel, which served for long-term sailing, and the abra, a maritime vehicle with a canopy (such ships now ply in the Dubai Creek as a “taxi”, delivering passengers).

Visitors are invited to inspect fishing tackle and tackle. For example, a hemisphere or a cube with round holes – mshedd – served as bait for fish. Hundreds of such structures were installed at the bottom of the sea, creating an artificial reef, and gargoras were placed around them – wicker cages. The invention significantly increased the catch: trying to hide in a shelter, schools of fish fell into a trap, and the cages were filled not in a week, but in a couple of days.

The Architecture of Consumption: Shopping Centers as an Exhibition Object - 8.08.21
Оставьте комментарий Cancel reply
Latest Articles
09:28
Everything You Need to Know About the Forex Traders Summit 2023
16:42
Abu Dhabi Mall: The Mall in the Center of Abu Dhabi
21:58
Is a Credit Card Required in Dubai: In Any Case, You Need a Credit Card On Your Dubai Vacation
20:49
You Have to Tip in Dubai: With a Few Dirham You Can Reach a Lot
21:25
Atlantis The Palm Dubai Lobby: The Atlantis The Palm Dubai Lobby is Very Impressive for Visitors
16:21
JA Oasis Beach Tower: You Have a Great View from the JA Oasis Beach Tower in Dubai
19:47
Aura Sky Pool: The Highest 360-Degree Infinity Pool in the World is Only in Dubai
19:54
10 Highest Hotels in Dubai: In the Emirate of Dubai There are Many Tall Hotels with Great Views
20:27
Sharjah International Airport: Home Airport of Air Arabia
17:36
The Biggest Myths About Dubai: Is It True
MyDubai.Media » News » Dubai Diving Village: Immerse yourself in History