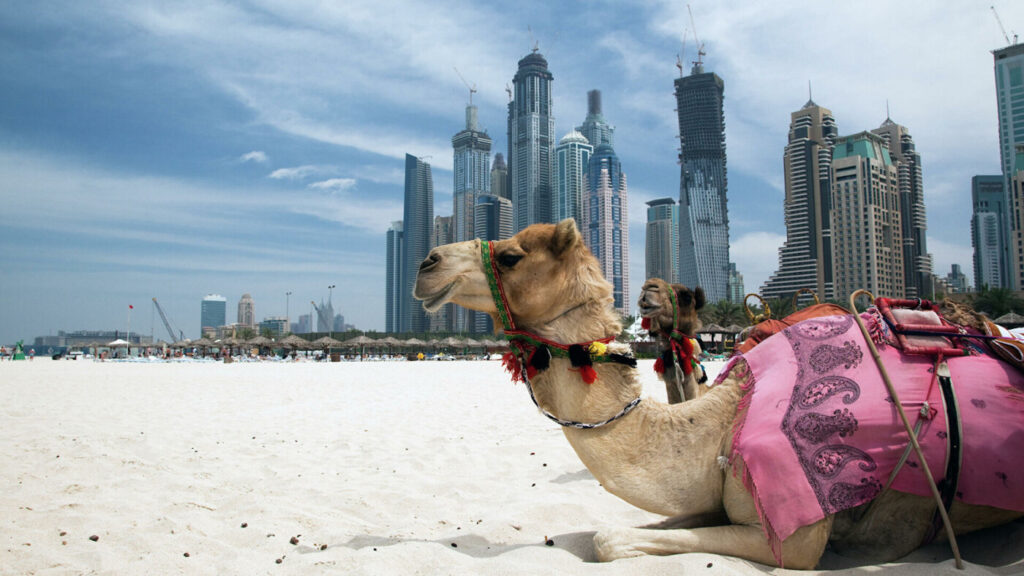 Dubai is the premier sports capital of the entire Middle East region. Here your attention will be provided with various types of competitions and international championships, golf, tennis, equestrian sports and car racing, ice skating, and scuba diving. The local climate and modern sports facilities make Dubai an ideal destination for sports enthusiasts and outdoor enthusiasts. The pride of the United Arab Emirates is camel racing.

Camel racing is a traditional national sport in Dubai. And for numerous guests and tourists, this is an interesting and colorful performance. On the territory of the entire state, the most modern tracks have been built, where camel races are held. The camel in the UAE is a symbol of the desert and the ancient roots of the Arab people.

Camel racing is a truly breathtaking spectacle that attracts spectators from all over the world. In addition, cruises on the proud ships of the desert are included in numerous tours and desert safaris. Camel races are organized mainly in the autumn and winter months, as well as on national holidays and other solemn processions.

For example, from October to February, traditional camel races are held as part of the AlMarmoumCamelRacing championship. The main task of such events is the preservation and transfer of the rich heritage of Arab culture to the descendants. Tourists from all over the world come to admire the proud representatives of the desert and the spectacular spectacle. And for those who cannot personally attend the camel races, a specialized television channel has been created here, which broadcasts all the important events in the world of traditional Arab sports.

The camel in the UAE occupies an important place in legends and traditions. This is a unique animal that deserves respect by right. Tall, slender, strong, unpretentious in nutrition, resistant to cold and heat, the camel embodies all the qualities necessary for survival in the desert.

Until recently, the camel in the UAE was the basis of all life, it was the most demanded vehicle and breadwinner of numerous Arab nomadic peoples. However, today many Bedouins have left their camels and moved to modern SUVs, and they live in houses made of steel and concrete. It was this state of affairs that alarmed the authorities of the United Arab Emirates. They are interested in preserving the country’s rich cultural heritage. Thanks to this attitude of the authorities, Bedouin traditions began to turn into an original and exciting sport. The official authorities of the Emirates, as well as private individuals, are actively funding this sport. Large amounts of funds are directed to the construction of special tracks and camel breeding.

Often, in order to preserve cultural heritage, camel races are timed to coincide with religious and national celebrations. To date, over 20 special tracks have already been built in the United Arab Emirates, where camel races are held. Modern tracks are equipped with comfortable stands for numerous spectators.

Camels of various ages can take part in the races, on average from 1 to 8 years old. Each round of races is held for a separate age category and one gender of camels. Females are preferred among race organizers. It is believed that females have a softer gait, they are calm and do not express their emotions. The speed that camels develop in races can reach up to 60 kilometers per hour. The average distance that camels cover in one run can exceed ten kilometers. The age of the jockey driving the camel must be at least 15 years old.

Camel racing in Dubai is carried out commercially. Various monetary and valuable gifts are provided to motivate the victory in the race. The sum of the main prize can be estimated at millions of dirhams. In addition to cash prizes, a luxury car or a piece of jewelry can be presented as a gift.

The organizers of the camel race try to decorate and diversify the sporting events held in every possible way. While attending camel races, you can visit specialized village fairs selling various camel wool products, carpets, and souvenir rosaries. Due to their exotic nature, such events attract a large number of foreign guests and tourists.

In addition to the entertainment component, camels in the UAE are the objects of serious scientific research. For example, in the territory of the United Arab Emirates, a specialized research center has been created that deals with the transfer of camel embryos. And the sale and breeding of pedigree representatives of camel individuals is a fairly profitable business for the local population. Individual pedigree runners can cost over a million dollars to the buyer – isn’t it a great business?

For the local population, camel racing is a rather serious sport. You will be convinced of this by visiting the running tracks, the Arabs cheer for runners with soul and passion. You yourself will plunge into this exciting and intriguing atmosphere. Who knows, maybe the impressions received at the camel race will become the most spectacular and memorable for you. This colorful and mysterious country can satisfy the needs of the most demanding tourist.

Around December of each year, you have a great opportunity to attend the Camel Festival in the United Arab Emirates. This is the world’s only and unique camel beauty pageant. The winners of this competition will receive numerous prizes and gifts, the total prize fund of the festival exceeds $ 13 million.

See also  Migration Situation in New York: Why is This City So Interesting?

Such an event will allow you to personally get acquainted with the customs and traditions of this fabulous country. The best ships of the desert will appear before you. This festival is not a simple competition, it is the relationship between the rich Arab heritage and the modern world. You should definitely see the camel races with your own eyes and appreciate their magnificence.

Post Views: 52
Related posts:
If you have found a spelling error, please, notify us by selecting that text and pressing Ctrl+Enter.

The Architecture of Consumption: Shopping Centers as an Exhibition Object - 8.08.21
Оставьте комментарий Cancel reply
Latest Articles
09:28
Everything You Need to Know About the Forex Traders Summit 2023
16:42
Abu Dhabi Mall: The Mall in the Center of Abu Dhabi
21:58
Is a Credit Card Required in Dubai: In Any Case, You Need a Credit Card On Your Dubai Vacation
20:49
You Have to Tip in Dubai: With a Few Dirham You Can Reach a Lot
21:25
Atlantis The Palm Dubai Lobby: The Atlantis The Palm Dubai Lobby is Very Impressive for Visitors
16:21
JA Oasis Beach Tower: You Have a Great View from the JA Oasis Beach Tower in Dubai
19:47
Aura Sky Pool: The Highest 360-Degree Infinity Pool in the World is Only in Dubai
19:54
10 Highest Hotels in Dubai: In the Emirate of Dubai There are Many Tall Hotels with Great Views
20:27
Sharjah International Airport: Home Airport of Air Arabia
17:36
The Biggest Myths About Dubai: Is It True
MyDubai.Media » Travel » Camels: Tradition, Customs, and Exciting Sports