Call of the Jungle: Inside Al Buqaish Jungle Private Zoo 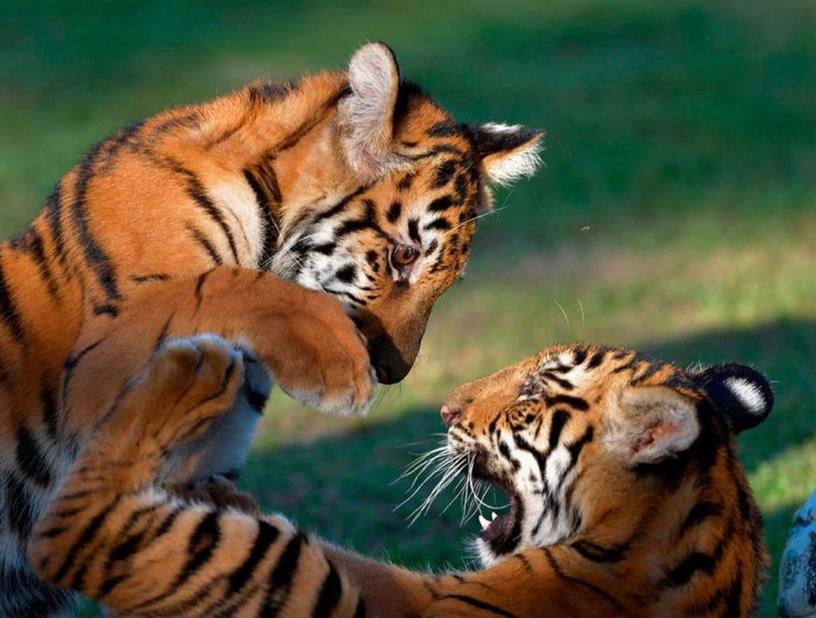 Stroking a lion’s mane or playing with tiger cubs? Pick up a funny little monkey or feed a Madagascar lemur? Look into the clever eyes of a real Canadian wolf or take a close-up photo of an inseparable pair of pink flamingos? Al Buqaish Private Zoo, a private animal welfare project, recently opened its doors.

Al Buqaish Private Zoo is located in the desert, an hour’s drive from Dubai. Emirati standards are already felt at the entrance – carved wooden gates, palm trees, beautiful fountains, a green, neatly trimmed lawn, aristocratic walking peacocks, pink flamingos, and funny Australian mars (Patagonian bunnies). But that’s not all. Passing further, you meet Simba, a white lion lying peacefully on the lawn, and two little tiger cubs are walking nearby. Someone hand-feeds a one-year-old brown bear cub Baloo from Russia. It seems that you have come to visit a very rich and very animal-loving person. The way it is.

Of course, all animals have their own spacious enclosures, which are divided into two rooms: one open, the other air-conditioned. Inside the cells, there are even their own small ponds, and from above, thanks to a special device, it can rain in hot weather. But most of the time they spend outside the cages, walking along with the lawns and green areas of the zoo. The territory has its own spacious pool, where they can take turns swimming.

Each animal, be it a lion, a tiger, a wolf, a bear, hyenas, a monkey, or even a huge yellow python, has its own caretakers who walk them, keep them on a leash and stay with them all the time if there are visitors to the zoo.

Moreover, the tiger caretaker cannot enter the lion’s cage – this is how it is done here. The animal gets used to exactly one trainer and accepts only him. But these rules, of course, do not apply to the founders of the zoo – Humayd and his partner Nurredin. All animals, without exception, are ready to throw themselves on their necks, hug, kiss, and cuddle, as loving and devoted animals can do.

Sami Humayd and Nurredin do not like their “children” and sometimes even take them out to sea on yachts or just take a walk outside the zoo. When asked how they train wild animals, Nurredin answers without hesitation: “With the help of love. It’s enough”. Nurredin, by the way, together with his wife Camilla, lives most of the time on the territory of the zoo in a specially built house and spends with his pets almost all the time – both day and night.

For example, when, for the sake of salvation, a young lioness, Maya, was brought here, who was very alarmed and could not find a place for herself, Nurredin went into her cage at night and slept next to her. So little by little, she began to get used to the new environment, realizing that nothing threatened her here and that she was protected. When animals feel that they are under reliable protection, their love for you increases many times over.

They begin to perceive their masters, who feed them, play with them, and care for them as their parents. This is how the very deep contact that lasts all life arises. Animals are smart and understand everything. And they can attack only if they feel a threat that comes from a person.

At the dawn of the zoo, in 2015, Humayd and Nurredin had no idea that they would open it to the general public. This place was developed on their own initiative in order to save wild animals, which were abandoned by the former owners.

They usually did not even know about the previous life of the discarded animals – they just called and asked to pick them up. Nurredin still cannot tell how the black Canadian wolf or the one-year-old grizzly bear ended up in the Emirates.

Unfortunately, this still happens quite often in the countries of the Middle East. Lovely animals, similar in childhood to affectionate kittens, grow up to be large, strong, and sometimes difficult to control individuals, and the owners try to get rid of them. Nurredin and Humayd brought such refuseniks here, nursed them at their own expense, adapted them, gave them a new well-fed life, and surrounded them with care.

One of the main rules of Al Buqaish Private Zoo is that sedation is never applied to animals (a means to calm the nervous system and slow down reactions), they do not cut off their claws and do not file their teeth. Even though almost all animals grew up with people, do not know how to hunt, and do not know what life in the wild is, their strength is naturally great. Therefore, contact with them requires a certain skill.

In Al Buqaish Zoo, you can pet a lion, play with tiger cubs and a monkey, hand feed a Madagascar lemur, watch rare white kangaroos or a graceful python, or even put it on your neck.

The goal is a closer acquaintance with wild animals, an understanding of their behavior, and, last but not least, direct communication with them. Many people from other countries, already knowing about Al Buqaish Private Zoo, especially come to this zoo, and not once. Getting acquainted with tame tigers or lions, people get used to them and want to communicate with them again. In addition, each time the fear of large animals decreases, you understand their behavior, and communication becomes even more interesting. Animals also remember you and next time they can remember and show their good nature.

Lions and tigers, despite their power and strength, think that we are equal to them, therefore, the manifestation of affection or playful behavior by them may seem to a person almost an attack. Animals love to play but do not know how or do not know how to calculate their strength when playing with people. Therefore, to fully communicate with them, you need a certain skill.

For example, the one-year-old lion Simba weighs 130 kilograms, and when, as in childhood, he wants to climb on Nurredin’s knees, he has to stop him. Moreover, all lions and tigers, like any cats, simply adore affection, kisses, and hugs.

See also  Long Island City in Queens: The Insider Guide Which Helps You to Know Everything

Such communication between man and animals is always therapy. After a few hours away from the city, in nature, in the company of such different animals, you feel the fullness of life and gratitude. You can come to this zoo with a family or a company, after talking with animals, arrange a barbecue on a separate lawn, and soon it will be possible to stay here overnight – guest chalets will open during this year.

Post Views: 963
Related posts:
If you have found a spelling error, please, notify us by selecting that text and pressing Ctrl+Enter.

The Architecture of Consumption: Shopping Centers as an Exhibition Object - 8.08.21
Оставьте комментарий Cancel reply
Latest Articles
09:28
Everything You Need to Know About the Forex Traders Summit 2023
16:42
Abu Dhabi Mall: The Mall in the Center of Abu Dhabi
21:58
Is a Credit Card Required in Dubai: In Any Case, You Need a Credit Card On Your Dubai Vacation
20:49
You Have to Tip in Dubai: With a Few Dirham You Can Reach a Lot
21:25
Atlantis The Palm Dubai Lobby: The Atlantis The Palm Dubai Lobby is Very Impressive for Visitors
16:21
JA Oasis Beach Tower: You Have a Great View from the JA Oasis Beach Tower in Dubai
19:47
Aura Sky Pool: The Highest 360-Degree Infinity Pool in the World is Only in Dubai
19:54
10 Highest Hotels in Dubai: In the Emirate of Dubai There are Many Tall Hotels with Great Views
20:27
Sharjah International Airport: Home Airport of Air Arabia
17:36
The Biggest Myths About Dubai: Is It True
MyDubai.Media » Articles » Call of the Jungle: Inside Al Buqaish Jungle Private Zoo