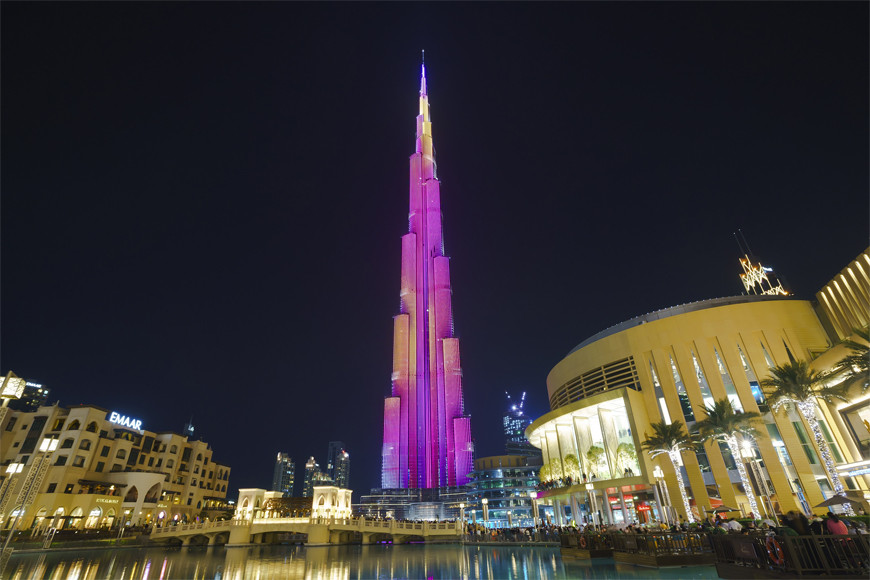 A new attraction in Dubai is the Burj Khalifa light show where you can see a spectacular light and laser show. Here you can find out the showtimes and how to watch them.

The Emirate of Dubai is known for its extraordinary attractions. Surely every tourist wants to visit the tallest building in the world. Especially on New Year’s Eve, there is always a gigantic fireworks display that attracts many visitors. Furthermore, there is always an impressive light show that is unique. But this was so well received by the visitors that it now also takes place regularly at other times. That means you don’t have to be in Dubai on New Year’s Eve to see this spectacular event. By the way, this is called the Burj Khalifa Light Show, in English Burj Khalifa Light Show and it is really an experience when you see this for the first time.

READ: VR Park: Virtual Reality Can be Experienced in the VR Park Dubai

Largest LED Projection Surface in the World at the Burj Khalifa

In order to draw the visitors’ attention to the tallest building in the world, the Burj Khalifa, an LED projection surface was attached to the facade of the skyscraper. This means that all animations can now be displayed there and of course you can see what you can imagine from afar. The operator always comes up with something new and the skyscraper always shines in different colors. Certainly very spectacular when it shines in the colors of the United Arab Emirates. For example, for the soccer World Cup in 2018, you could see the results of the games on a gigantic screen.

Furthermore, the countdown is always counted down on New Year’s Eve. But if you want to see it well then you should stand a little further away from the building. The best is even a few kilometers and if you stand directly in front of it you can’t see everything because it is so high. If you book a hotel in downtown Dubai such as The Address Downtown Dubai then you have a great view. You can book rooms with a Burj Khalifa view that also have a balcony. That is certainly a great experience if you can even watch it from your hotel room.

Typically, the Burj Khalifa light show takes place every day of the week from 7:30 p.m. to 11:00 p.m. But there are no exact showtimes and these can also vary. It may well be that when the Dubai Fountain show is taking place, it will also be presented at the same time. Furthermore, it can also be that you first get the show of the water fountains and in between the light show at the Burj Khalifa. We recommend going outside and staying there for an hour, for example. There are numerous good restaurants right on the promenade where you can sit down.

So you definitely don’t miss anything. The outside terrace of the Apple Store in the Dubai Mall is definitely an insider tip. From there you have a great view of the water show and the light show. But of course, there are always many visitors there who would also like to see it. That’s why there is also security there who looks exactly how many visitors are currently on the terrace. Because security is always very important in the emirate of Dubai.

Do You Have to Pay Admission There?

The Burj Khalifa light show is free to watch and there is no entry fee. That would also make no sense because you can see them from afar. Because the skyscraper is 828 meters high and you can still see it a few kilometers away. But the LED projection surface was only installed on the side facing the lake. On the other side, where the main entrance to the tower is, nothing can be seen. So you always have to be on the right side of the building. But that’s not a problem and you just have to look where most of the people are.

If you have never been to Dubai, the question is how to get to the Burj Khalifa. We recommend tourists use the Burj Khalifa Dubai Metro Station where there is a direct transition. However, you have to go completely through the shopping center and the exit to the lake is at the bottom. In any case, you always have to walk a little and it is not possible to get there quickly without moving. Anyone who has booked a hotel in Downtown Dubai or Business Bay, such as the Steigenberger Dubai Business Bay or The Oberoi Dubai, can use the hotel’s free shuttle buses. But you can also take a taxi right in front of the main entrance of the mall. From there you have to walk a bit again.

How Long Does the Burj Khalifa Light Show Last

Usually, this always takes between five and seven minutes. But it always depends on what is being demonstrated there. You have to know that there are always changing animations. There is also the right music coming from the speakers of the Dubai Fountain. It is also possible to take photos and video recordings there. But since it is already dark you should adjust the camera particularly. As a rule, however, you can see the show well because it is brightly lit. But you can also stand a little further away and then you can see it even better.

Post Views: 465
Related posts:
If you have found a spelling error, please, notify us by selecting that text and pressing Ctrl+Enter.

The Architecture of Consumption: Shopping Centers as an Exhibition Object - 8.08.21
Оставьте комментарий Cancel reply
Latest Articles
21:38
9 Facts about Emirates Airlines: Here You Can See Some Facts about Emirates Airline
21:39
Rixo’s The Palm Dubai: A Beautiful Beach Hotel in Dubai is the Rixos The Palm Dubai
19:34
More About Transport: The Tram in Dubai
21:05
Dubai Water Bus: The Dubai Water Bus is a Great Way to Explore the Marina and the Dubai Creek
16:30
Which Airport in Dubai: Where You Can Land
19:54
How Does a Doctor Visit in Dubai: You Do Not Have To Be Afraid
22:58
Air Arabia: Airline from Sharjah
19:25
Where the Sands: 10 Good Reasons Why You Absolutely Have to Go to Dubai
21:57
Safety in Dubai: Dubai is Considered One of the Safest Countries in the World
09:28
Everything You Need to Know About the Forex Traders Summit 2023
MyDubai.Media » Travel » Burj Khalifa Light Show: Free for Tourists