Bedouins: From Camels to Toyotas 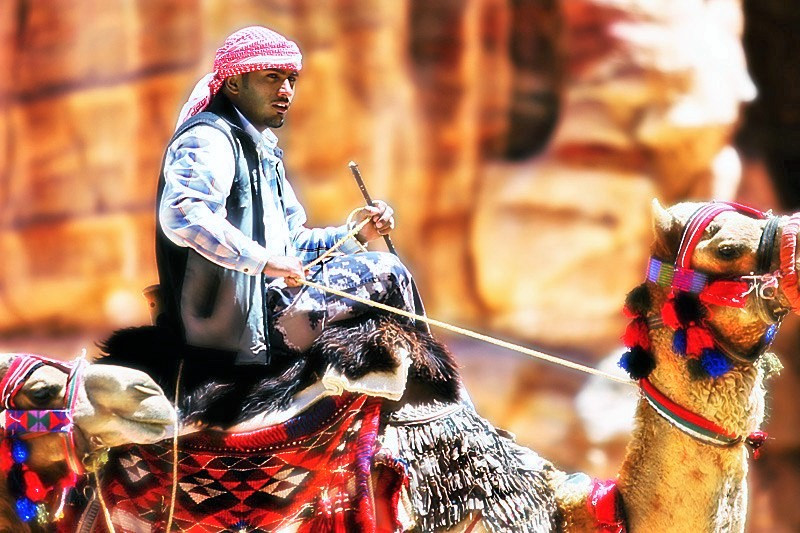 Azure sky, blue sea. In the honeycombs of white fences, rare and desirable, like a sip of spring water in the desert, spots of greenery – such are the United Arab Emirates from the window of a liner landing at Sharjah airport.

Behind the passport control, a funny three-second procedure for scanning the iris of the eyes, for comparison with an electronic database on previously deported from the country. Most tourists head to the vicinity of Dubai on the coast of the Persian Gulf.

Going over in memory the impressions of visiting the super-modern city of Dubai, it is hard to believe that forty or fifty years ago on the land of the “pre-oil Arab Emirates” there were only a few small towns with houses made of wild stone coated with clay. And the rest of the space, covered with sands and rocks with rare oases, was inhabited by free nomadic tribes – Bedouins. They were in hot, dry summers around the oases and went on camels to roam the poor pastures with flocks of short-haired sheep from October to April.

The historical ancestral home of the Bedouins in the interior of the Arabian Peninsula. Representatives of these people are distinguished by a thin, wiry physique, endurance, and a habit of all kinds of an inconvenience.

For thousands of years, despising agricultural tribes, considering labor on the land the lot of slaves, at the end of the twentieth century they still could not resist the merits of settled life and changed their collapsible tents to two-story mansions, and their faithful friends – camels to Toyota.

The Bedouins never had any documents. In the recent past, they did not recognize borders, and in search of the best forage lands, they wandered with their herds from one country to another.

Bedouins are one of the most ancient and self-isolated peoples on earth. But in recent decades, loyalty to the customs and traditions of the ancestors has weakened. For example, mixed marriages between Bedouins and Arabs are not uncommon.

Nomads live in tents made of thick coarse fabric, which women weave from goat and camel hair on narrow looms, and then sewn into wide panels for the tent. When the tribe migrates, the tent frame and panels are rolled up and transported on camels. The tent consists of a female and a male part. Each of them has its own hearth. The main burden in the family, as usual, lies with women: grazing livestock, cooking, sewing clothes. It is forbidden for strangers to approach women.

If the traveler who has come to the Bedouins is in no hurry, he must take off his shoes as a sign of this. Among the most famous and developed traditions of these people is the coffee ceremony. It consists of a strictly ordered sequence of actions. First, they roast the grains, then grind them in a mortar and invite guests and neighbors to visit with music. Coffee is brewed in a special dish and the first drop of the drink is poured onto the ground. Then the owner tastes it, and only after that, it is poured out to everyone who comes, serving counterclockwise.

There are many more Bedouins who will unmistakably indicate where to dig a well, easily navigating without a compass by the stars and the terrain, will lead the caravan to the goal, predict a sandstorm in advance, which, perhaps, will save fellow tribesmen from death in the loose clubs of the revived dunes.

Layered, lightweight clothing provides excellent air circulation while absorbing the sun’s rays. A piece of fabric wrapped around the head and neck delays the loss of precious moisture in the desert and at the same time protects the face from fine dry sand.

Although, to be honest, with all the admiration for the grandeur of the architectural fantasies of the human mind, you feel like an insignificant midge around them. There is no comfort and warmth in modern buildings. Life in them turns into emotionally poor functioning according to a given program. The soul is torn from such a reinforced concrete creation of civilization to the smoky hearth of a free Bedouin nomad, to real life, where happiness does not require a complex accumulation of material values.

Traffic jams on city streets are common. This problem is compounded by the fact that the Arabs love big jeeps, preferring Toyota, Nissan, and Mercedes. There are few old cars. There are usually two cars in a family. The husband rides one in splendid solitude, and the wife and children ride the second. Outside the city, there are rows of representative pavilions of the salons of all famous auto brands.

READ: Exclusive Desert Tours in the Emirate of Dubai: Try Something New

The streets of Emirati cities are deserted. At first, this caused surprise and bewilderment at the same time. It is indecent to walk here.

The Arabs are sure that it is not appropriate for a decent person to wear a colorful robe. A noble man’s clothing should be white. Women and girls in black dresses and black shawls. Some have open faces, others only see their eyes. Widows wear blue dresses. Only divorced women are allowed to wear a white dress. By the way, only UAE citizens have the right to wear national clothes.

The Architecture of Consumption: Shopping Centers as an Exhibition Object - 8.08.21
Оставьте комментарий Cancel reply
Latest Articles
21:58
Is a Credit Card Required in Dubai: In Any Case, You Need a Credit Card On Your Dubai Vacation
20:49
You Have to Tip in Dubai: With a Few Dirham You Can Reach a Lot
21:25
Atlantis The Palm Dubai Lobby: The Atlantis The Palm Dubai Lobby is Very Impressive for Visitors
16:21
JA Oasis Beach Tower: You Have a Great View from the JA Oasis Beach Tower in Dubai
19:47
Aura Sky Pool: The Highest 360-Degree Infinity Pool in the World is Only in Dubai
19:54
10 Highest Hotels in Dubai: In the Emirate of Dubai There are Many Tall Hotels with Great Views
20:27
Sharjah International Airport: Home Airport of Air Arabia
17:36
The Biggest Myths About Dubai: Is It True
14:52
The Ukrainian Charitable organization appeals to the world community to help Ukrainians affected by the war in Ukraine
18:19
Yas Island Rotana: Yas Island in Abu Dhabi
MyDubai.Media » Articles » Bedouins: From Camels to Toyotas