Bahur and Ud: Enchanting Fragrances of the East 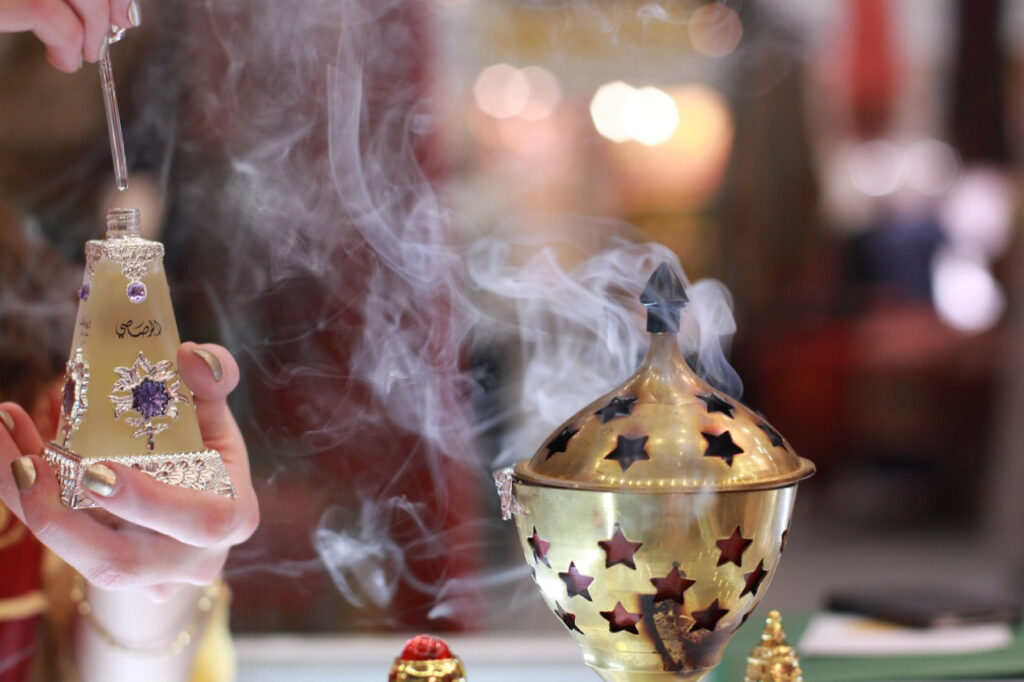 Anyone who has ever been to the Emirates or another Gulf country knows firsthand about a real “Arab” scent. Arabs know a lot about good smells. A rich and dense sillage of the scent accompanies every indigenous inhabitant of the UAE.

Arab perfumes are appreciated all over the world for their rich bouquet and a touch of elitism. Many Western brands produce “oriental perfumes”, but no Yves-Saint Laurent or Dior can compare with the splendor of real perfumes from the Persian Gulf.

We will tell you everything about oud oil and wood for bahur incense burners, as well as about the real smell of an Arabian fairy tale.

READ: Diving in the UAE: Everything Beginners Need to Know

No, this tree is not used for making an agar-agar confectionery component. Agarwood is appreciated by others. More precisely, this is not one kind, but a whole family of seventeen species of trees, united by one name – Aquilaria. The wood of the representatives of the family is in itself unremarkable; the cabinetmakers of antiquity did not pay attention to it. Agar trees also do not give useful and tasty fruits.

The area of ​​the original growth of agar trees in Southeast Asia. From the texts that have survived to our days, we learn that already in antiquity, the Chinese, the Japanese, and the Indians all knew about the magic of the Aquilaria family.

But what was it? These trees are susceptible to one nasty fungus: Phaeoacremonium. The parasite with a difficult to pronounce name does not attack all trees, but very selectively. Usually, 7-10% of plants get sick.

Under the influence of the fungus, the wood begins to actively defend itself and releases a dark, thick resin, which permeates the trunk of the plant, causing it to darken. And at the same time – it emits a thick, heavy, and enchanting smell.

The ancient nomadic Arabs noticed that a fire made of agarwood perfectly scares away all kinds of insects. And clothes saturated with smoke retain their scent for a very long time. This is how the first step was taken towards the discovery of one of the most valuable substances in the world – oud oil. Although the Hindus and Chinese used the resin of the agar tree before the Arabs: in many texts, there is evidence that the component was valued as an excellent medicine, and was also used for magical purposes.

The 9th century is the beginning of a new era not only for the Arabian but for the world’s perfumery. The Arabs invented the distillation method. Europeans quickly got the hang of using the method for the production of spirits. But the technique is also actively used for the production of valuable extracts of aromatic oils. Agarwood shavings and chips were processed. Of course, ud was extracted from them – the most valuable oil that today costs one and a half times more than gold.

READ: What Language is Spoken in the UAE: Everything is not So Simple as It Seems

Since the beginning of industrial production, oud has always been the preserve of the rich. In order to extract 25-30 milliliters of a valuable substance, it is necessary to process one hundred kilograms of wood. The wood itself is also not cheap. The lowest price starts from $ 100 per kilogram. Prices can fluctuate significantly depending on the age and degree of fungus infestation of the wood, the area of ​​growth.

Also, great attention is paid to the “naturalness” of the fungus in the wood. Since natural plantations of agar trees today are almost on the verge of extinction, artificial nurseries are widespread. There, the plants are especially infected with strains of the fungus in order to quickly get resin and ud in large quantities. Professionals and those who make perfumery in the traditional way, such raw materials are called “counterfeit”. But he has a more affordable price.

In traditional medicine of the Persian Gulf, oud oil is actively used as a dietary supplement, for example, dripping into tea. It is believed that it has a beneficial effect on the health of the digestive tract, liver, and can even cure cirrhosis. Lovers of finer materials note that ud is a great aphrodisiac that kindles a desire for love.

But most people are interested in the aromatic function of ud. As a prized base for traditional Arab perfumery, ud is rarely performed solo. The aromatic concentrate is mixed with a neutral base oil, then a bouquet is formed by adding rose, jasmine, patchouli, and sandalwood oils. The following is interesting:

The best brands of Arabian perfumery are Ne’emah and Ajmal. They have branded corners in all major malls in the Emirates. There are also many perfumery departments in shopping centers that are not tied to brands. But adventure seekers and lovers of identity can head to the aforementioned Deira Spice Souk, as well as other smaller markets in old Dubai.

The quality of perfumes there is no worse, but the prices are much lower. The reason is the high cost of renting in shopping centers.

Another interesting and important clarification – in many places you will be poured perfume by tap. But the minimum price for such a pleasure is 380 dirhams. So it is more profitable to go to a place with low prices in order to get a more magical and enchanting scent for the same amount.

And if you want to bring a branded perfume from a trip to the UAE, then it is best to go duty-free. There you can also buy sets with perfume miniatures from leading brands like Ajmal and Amouage: perfect for the first acquaintance with the magic of the Persian Gulf perfumery.

Bahur is a specially pressed shaving of agarwood, impregnated with aromatic oils (sandalwood, patchouli, rose, and jasmine). It is customary not to burn them, but to “smoke” – they are placed on coals and allowed to rise into the air with dense, aromatic smoke.

Like incense, bahur is intended for aromatizing premises. If incense has a short-term effect, then the aroma of bahur remains for a long time in pieces of furniture, in the very walls of the room where the ceremony was held, and, of course, in clothes. Arabs “smoke” bahur infrequently: before big holidays, receiving important guests. Its aroma is endowed with the qualities of an aphrodisiac, therefore, the matrimonial bedroom is necessarily smoked at intervals.

The incense burner is traditionally called mabkhara. Classically, bahurnitsa is a deep plate where charcoal is laid out, set on fire, and a piece of bahur is placed on top. The simplest mabkhars can be bought from 30 dirhams and above in all kinds of markets in Dubai. There are, of course, expensive pieces of gold, with precious stones, but collectors prefer them. And the lack of mabkhara decor does not affect the properties of bahur in any way.

Bahur is “lit” in a room with closed windows, from where all people and animals are taken out. The procedure is not carried out for a long time. It doesn’t make sense. They wait for the smoke to dissipate through the air, soaking items of furniture and clothing, then open the windows to ventilate. It is not recommended to leave the censer unattended. The pressed bahur blocks themselves are strictly forbidden to be taken orally, so the packaging is protected from children.

But if there is a fire detector in the room, you should be careful: the thick smoke of the bahur will make it react and disrupt the process of fumigating the room for you.

Traditionally, bahur is pressed into round tablets or in the form of a chocolate-like bar, from which the squares are broken off and placed on the mabkhara. You may also be offered bahur by weight, in the form of loose tablets, but you should not buy one. The point is that bahur without factory packaging will not be allowed through customs. In order not to lose a valuable souvenir, buy packaged blocks.

Prices for bahur start at 20 dirhams, but there is no upper limit for the cost. Depending on manufacturers, aromas, and the quality of the bahur itself, the price can be very high. Equip yourself with the only weapon possible in this case – your nose, and then go in search of the perfect souvenir.

Although the production of bahur under industrial conditions is very common, the Arabs still consider it the best bahur to be made at home. Traditionally, women were engaged in this, the family recipe was passed from mother to daughter, from mother-in-law to daughter-in-law. It is women from wealthy families, especially of the past generation, who are one of the main clients of agarwood suppliers. No Arab woman will give you unique recipes and the secret of making the perfect mixture for impregnating wood chips. So buy a ready-made bahur and follow the safety rules.

Post Views: 416
Related posts:
If you have found a spelling error, please, notify us by selecting that text and pressing Ctrl+Enter.

The Architecture of Consumption: Shopping Centers as an Exhibition Object - 8.08.21
Оставьте комментарий Cancel reply
Latest Articles
21:38
9 Facts about Emirates Airlines: Here You Can See Some Facts about Emirates Airline
21:39
Rixo’s The Palm Dubai: A Beautiful Beach Hotel in Dubai is the Rixos The Palm Dubai
19:34
More About Transport: The Tram in Dubai
21:05
Dubai Water Bus: The Dubai Water Bus is a Great Way to Explore the Marina and the Dubai Creek
16:30
Which Airport in Dubai: Where You Can Land
19:54
How Does a Doctor Visit in Dubai: You Do Not Have To Be Afraid
22:58
Air Arabia: Airline from Sharjah
19:25
Where the Sands: 10 Good Reasons Why You Absolutely Have to Go to Dubai
21:57
Safety in Dubai: Dubai is Considered One of the Safest Countries in the World
09:28
Everything You Need to Know About the Forex Traders Summit 2023
MyDubai.Media » Articles » Bahur and Ud: Enchanting Fragrances of the East