Al Bastakiya District: How To Immerse In The Atmosphere Of Old Dubai 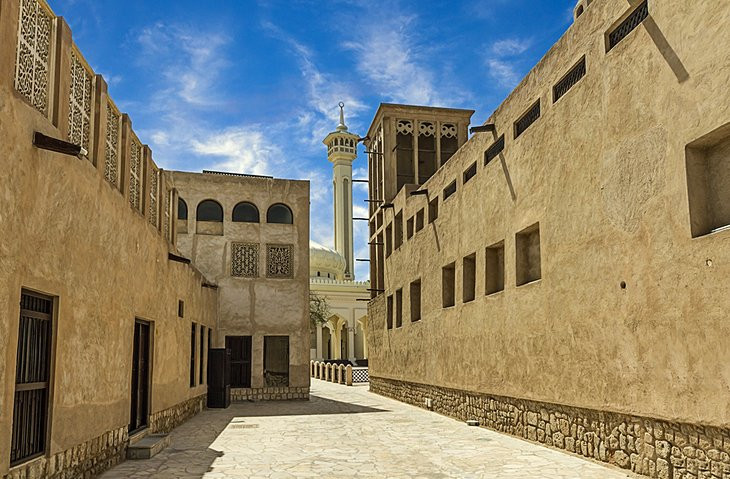 The  Bastakiya is an ancient area of ultra-modern Dubai in the Arab Emirates, which retains the region’s history and culture, and is the center of its monuments and attractions.

This historic area is miraculously preserved in highly developed Dubai. When mass construction began in the city, a large office building was to be built in its place. But the architect who designed the project did dissuade the sheikh from destroying this historic area.

If we look at the historical facts of the emergence of Bastakia, it can be said with a precision that the construction of this area was started in the 19th century. Originally, it was a commercial district founded by Persian merchants. Later there were also pearl fishermen and several wealthy families. In the 1930s, the region played an important role in overcoming the crisis. Thanks to local traders, the city survived, and established large trade with Persia and India.

The Bastakiya area is currently one of the most visited tourist destinations. Narrow streets, old houses, and shopping malls attract a huge number of travelers.

The land here is very expensive, however, new hotels, restaurants, shops, museums are constantly opened in Bastakiya. It is one of the few places in Dubai where the original, classical Arab architecture is preserved. The area of Al Fahidi Historical stands out from modern Dubai.

The most interesting excursions are the routes from locals on Tripster. You can start with a tour of Dubai. All the guides offer comfortable tours for 6-8 hours. To learn the most about the old quarts look at the tour «Dubai Through Centuries». More than 6 hours walk with a guide.

Many of the buildings that can be seen in Bastakiya today date back to the 19th century. As a result, the district was given the informal status of the oldest in the city. His story began with the settlement of these streets by traders and pearl fishermen from Persia. They built not the most luxurious but the strongest houses for their families. The main materials used in the construction were clay, palm branches, lime, and shellfish – all that could be obtained nearby. Weather conditions also made it necessary to work on the ventilation device: it was here that the first wind towers to cool the dwelling appeared.

For several decades, the quarter grew and strengthened. After a while, wealthy families began to emerge. In the mid-20th century, some houses became empty – those who could afford it moved to more comfortable areas. Empty dwellings were occupied by migrants.

The 1980s were a turning point for the area. There was controversy around Bastakiya: the authorities planned to demolish the area and build a business center and a modern residential quarter in its place. However, historical buildings were supported by ordinary townspeople, local architects, and even Prince Charles of the United Kingdom. The area was eventually left untouched, and in the 1990s it was bought from local residents and restored.

The area is located directly on the shore of the Dubai Creek sea sleeve and formally belongs to the administrative part called Bar Dubai. The Bastakia district is enclosed between Al Fahidi and Al Seef Streets. It is best reached by bus.

Metro: on a green branch to Al Fahidi station.

Walk from the station for another 10-15 minutes.

Of great interest are once seemingly habitual 19th-century houses. Here you can wander between clay houses, study their device and features.

Also worthy of attention is the engineering invention of the inhabitants of Bastakiya of past centuries – so-called wind towers. They were created here rather from despair: the heat had an impact on all spheres of Arab life, and it had to be fought. In the past, the inhabitants of the Arab Emirates had built straw huts for that purpose. However, a new invention made in Bastakia soon spread throughout the United Arab Emirates and allowed people to move into stronger dwellings.

We should not miss the opportunity to see the surviving element of the wall. It dates back to the early 19th century and is a unique object.

Tours of the Region

As a historical area, Bastakia is often one of the points on the tour of Dubai. He is given a certain amount of time to take a walk in the streets, take a photo and map the alleys, which are always worth looking at on the next visit. Such a tour of the city will allow you to get acquainted with this quarter as well as with other notable objects.

On average, such a tour takes from three hours and costs $200 each, provided a group of 10 to 15 people is available.

Not only is the basilica infused with the centuries-old history of the city, but it also offers its guests a variety of unique buildings and attractions. Everyone should come here to feel the local colors and learn more about culture.

Post Views: 279
Related posts:
If you have found a spelling error, please, notify us by selecting that text and pressing Ctrl+Enter.

The Architecture of Consumption: Shopping Centers as an Exhibition Object - 8.08.21
Оставьте комментарий Cancel reply
Latest Articles
09:28
Everything You Need to Know About the Forex Traders Summit 2023
16:42
Abu Dhabi Mall: The Mall in the Center of Abu Dhabi
21:58
Is a Credit Card Required in Dubai: In Any Case, You Need a Credit Card On Your Dubai Vacation
20:49
You Have to Tip in Dubai: With a Few Dirham You Can Reach a Lot
21:25
Atlantis The Palm Dubai Lobby: The Atlantis The Palm Dubai Lobby is Very Impressive for Visitors
16:21
JA Oasis Beach Tower: You Have a Great View from the JA Oasis Beach Tower in Dubai
19:47
Aura Sky Pool: The Highest 360-Degree Infinity Pool in the World is Only in Dubai
19:54
10 Highest Hotels in Dubai: In the Emirate of Dubai There are Many Tall Hotels with Great Views
20:27
Sharjah International Airport: Home Airport of Air Arabia
17:36
The Biggest Myths About Dubai: Is It True
MyDubai.Media » Articles » Al Bastakiya District: How To Immerse In The Atmosphere Of Old Dubai